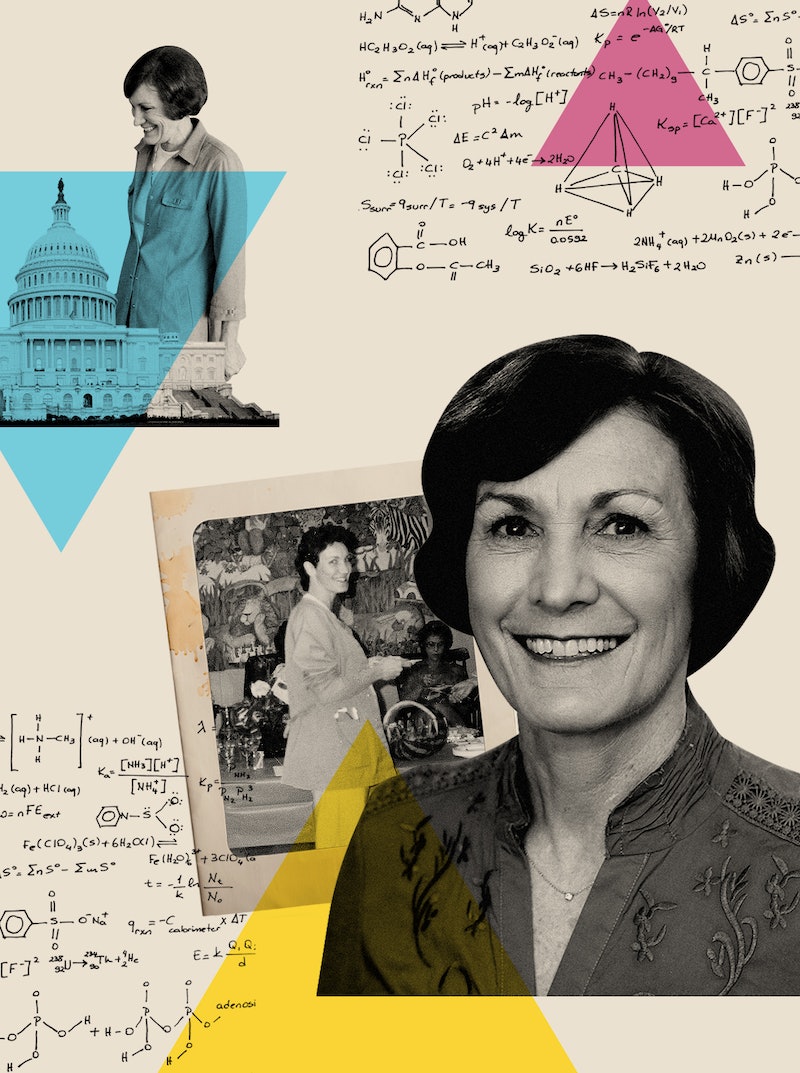 Since 1938, both Kansas Senate seats have been occupied by Republicans. This November, the anesthesiologist-turned-state legislator is running to become the country’s first woman physician in the U.S. Senate, and Kansas’ first Democratic woman in the Senate.

She’s a surprising contender for the title, having spent 43 years as a registered Republican. In 2010, about 10 years after she retired from medicine, Bollier learned about a vacant seat in the Kansas State House and won the seat in a special election. She was pro-choice, pro-stricter gun laws, and pro-Medicaid expansion — an undeniably moderate Republican — yet won her House reelection campaign, then again in 2012 and 2014, and later nabbed a seat in the state Senate in 2016.

But 2016 upended everything. In the wake of Donald Trump’s election as president, she watched her party push anti-transgender policies, block Medicaid expansion, and cut funding for public schools, policies that didn’t align with her moral compass. As a physician, she’d taken the Hippocratic Oath, which prioritizes science, collaboration, and preventative care to treat patients. To her, the Republican Party was spiraling away from that mission.

"We need to prevent the economy from collapsing in on itself, because that hurts individual families."

Two years later, she willingly committed a party faux pas and endorsed Laura Kelly for Kansas governor, a Democratic candidate who prioritized Medicaid expansion and funding public schools, rather than the Republican candidate, Kris Kobach, who was known for anti-immigration views and voter-fraud conspiracies. Shortly after the endorsement, the Senate’s Republican president removed Bollier from her role as vice chairwoman of the Public Health and Welfare Committee. The tit-for-tat move was the final straw. By December, Bollier announced she was switching parties. Her kids, both Democrats in their 30s, asked, “What took you so long?”

“It was a huge change, because it is an identity issue,” Bollier, 62, tells Bustle. Her husband, a family medicine doctor, supported the decision, but her mother had a tougher time as a lifelong GOP loyalist. “I have always said, ‘I'm trying to change things from within, on the Republican side.’ But at some point, obviously, I realized it was failing. People need leadership and things to actually happen in government for the good of the people. It was time to move on.”

When Bollier and I speak via Zoom, she’s a week away from her Aug. 4 primary election. (She ultimately won with 85.6% of the vote.) Her campaign exhaustion is offset with a blindingly pink blazer. She hardly knows what time it is. I remind her that it’s about 5:30 p.m. on the East Coast and apologize in advance for my shrieking 1-year-old, who’s burning off some pre-dinner energy. “I want you to know how important it is that women not apologize for their kids,” she tells me. “I'm thrilled that your child is there. Our leadership is dependent upon people knowing we can do this.”

In November, the Democratic Party leadership could depend on her. Democrats need three net pickups in the U.S. Senate to claim majority rule, and polling shows Kansas as a razor-thin toss-up race. It’s a battle between two physicians with opposing ideologies. Bollier’s competitor, Rep. Roger Marshall, is an anti-choice OB/GYN who supported Trump’s ban on transgender people serving in the military. In late June, when Kansas had almost 13,000 confirmed cases of COVID-19, he said, “Of course I’m not going to be in favor of any federal mandates that say that you have to wear a mask. I think that it is up to the individual... It does upset me that the Democrats, especially the Democrat governors, want to attack our civil liberties.”

Around the same time, Bollier posted a video to Instagram about the benefits of masks. Kansas has now passed 30,000 total confirmed cases.

As the daughter of a physician and a nurse, Bollier always excelled in science and math. She imagined her future in Supreme Court justice robes and idolized fellow Kansans Amelia Earhart and Nancy Kassebaum, the first woman in the state elected to the Senate. She had dreams of playing golf professionally and joined the University of Kansas' varsity team for three years. (Ever practical, she took a hiatus her junior year to prioritize organic chemistry.) She ultimately followed in her father’s footsteps, graduating from the University of Kansas School of Medicine, followed by an anesthesiology residency at Baylor College of Medicine in Houston.

She speaks about her father’s work as pivotal to her own. In the 1970s, he founded the state’s first freestanding outpatient surgical center after fervent lobbying to legalize outpatient procedures. He viewed them as a means to more affordable, accessible health care, and when Bollier finished her Houston residency, she returned to Kansas and joined the practice.

“Women have a tendency to question themselves. ‘Did I learn enough, did I do enough?’” she says. “[As a physician], you have to know that you know [the solution] and do it. I'm able to transfer that as a legislator now. I've done the hard work behind the scenes, so I can move forward without constantly having to question myself.”

Bollier’s stance on abortion (pro-choice) or education (she supports more funding for public schools and universal pre-K) or LGBTQ rights (she supports the Equality Act) may give off the air that she’s a Democrat with a capital D, but she’s a proud centrist. “Moving toward the middle is what the people [in Kansas] do best with,” she says. “Having this extremism, moving way far to the edges, that is not what the majority in that bell-shaped curve want.”

The Green New Deal? “I do not support the Green New Deal as it’s currently written. I do agree that we need to take serious steps to address the threat of climate change.” Medicare for All? “I don't believe in mandating Medicare for all. My stance is, ‘Let's build on the Affordable Care Act.’” Defund the police? “I support reforms like banning chokeholds, requiring increased transparency, and other common-sense measures to make our communities safer.” Big Tech? “I am willing to sit down at the table and listen to ideas from everyone to help solve [the lack of broadband internet access in rural Kansas] and fully bring our state into the 21st century.”

That’s all to say Bollier’s politics haven’t changed — the party lines have. She still believes in the power of local government, a Republican calling card, but when it comes to a public health crisis like COVID-19, she feels strong federal leadership is essential. (“In the military, we don't say, ‘OK, y'all are from Georgia. You bring your [own] equipment,’” she analogizes.) When I ask about financial relief during the pandemic for corporations, she applauds innovative local leaders like Spirit Aerosystems, which leaned into ventilator production. “Leaders should be focused on making sure people continue to get paychecks," she adds. "We need to prevent the economy from collapsing in on itself, because that hurts individual families.”

And agriculture remains a top priority, as it employs about 13% of Kansas’ workforce. “The Phase One trade deal with China was a good first step, but we have to think bigger about expanding markets and negotiating new trade deals that lift commodity prices [so that] producers can make a living.”

“There's the desperate need we have in this country right now for scientifically-minded leadership like Barbara's, along with her medical expertise as we face down a public health crisis and an ongoing crisis of cost with respect to health care,” EMILY’s List president Stephanie Schriock tells me via email. “[Our country] needs leaders who are going to focus and work [on] the problems in front of us.”

Ultimately, Bollier sees herself as someone who’s willing to put her ego aside to get things done. “You don't just call each other out and say, ‘You're doing it wrong,’” she says of her time in the operating room. “You've got to have the end goal in mind. It's always about the right thing for the patient. It's not about you.”

Bollier has the same mindset when it comes to her constituents. “When you lead for the people, [it’s] funny,” she says, “they vote for you.”