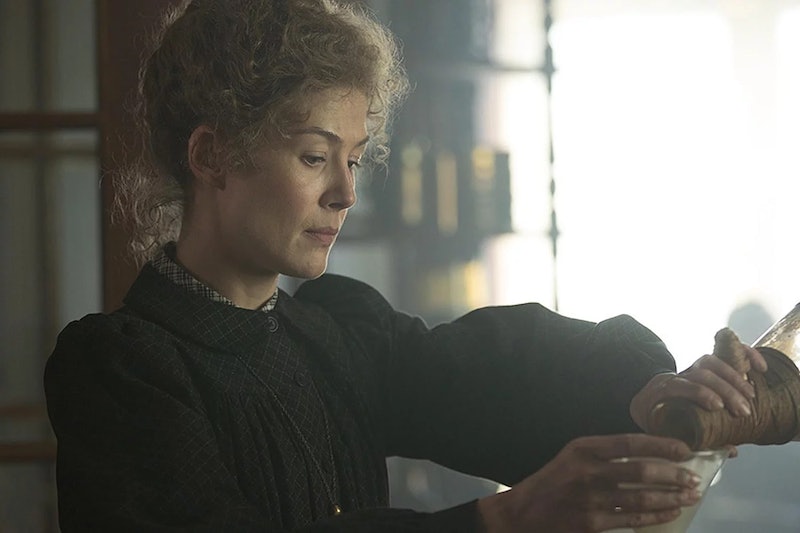 Rosamund Pike was nominated for an Oscar for her portrayal of the fictional Amy Elliott Dunne in 2014's Gone Girl, but the actor's new film Radioactive is based on a true story. In it, Rosamund Pike portrays Marie Curie, the 19th-century scientist who — along with her husband Pierre Curie — is renowned the world over for her discovery of the radioactive elements radium and polonium. Curie's achievements are incredible, and yet, much about her remains a mystery to a large swath of the population. Radioactive (out on Amazon now) could help to educate people about all that Curie accomplished in her career, and Pike believes that the time is right for the scientist to return to the zeitgeist.

"I think that’s the exciting thing, that you’ve got this iconic figure who was about the most famous woman in the world at that time, and nowadays the name has stayed very current and people are very aware of it, but exactly what she achieved people are very hazy about," Pike tells Bustle. "So, I’m excited at this time when science is right back at the forefront of our minds with [the search for] a coronavirus vaccine that we’re bringing out a film about a scientist and what can be achieved if curiosity plus brilliance pushes on to an amazing discovery."

In addition to detailing her numerous scientific achievements, the film also gives a detailed look at Curie's family life. Specifically, her marriage with fellow scientist Pierre Curie, with whom she shared the first of her two Nobel Prize victories. "I was very inspired and moved by what a marriage they had, what a kind of incredible partnership that was very modern," says Pike. "A total meeting of soul and heart and mind in these two people who fell in love, were each other’s soul mate, and they changed the world together."

A big aspect of Curie's story is how her research on radioactivity ultimately changed the world — for better and for worse. For Pike, representing that complicated legacy was just as important to the film as the actual details of Curie's life. "We wanted it to be a kind of unruly film, a biography of radioactivity as much as it is a biography of Marie Curie," she says. "We really wanted it to be a film that kind of excites people about science, both the wonder of it and the awesomeness of it and, you know, what happens when you unlock the mysteries of the universe."

An undeniably notable aspect of the film is that it is about the life of a prominent female scientist — a relative rarity when it comes to Hollywood biopics. Pike is hopeful that the movie could inspire more examples in the genre, as there are certainly plenty of female scientists whose stories deserve to be told. "I hope [there will be more movies about female scientists] because science is still a field in which women are underrepresented," she says. "And yet, I feel that the kind of core quality necessary to be a good scientist is curiosity, and I think women possess curiosity in spades."

But Curie wasn't just a scientific genius, she was also a revolutionary feminist who refused to let the confines that society had imposed on her gender prevent her from achieving her goals. And it's that type of attitude that Pike hopes viewers will notice most in Radioactive. "I hope that people admire [this] unruly woman because I’ve always had great empathy for the unruly women," she says.

More like this
What's New On Netflix: A Third '365 Days' Movie & Lili Reinhart’s New Film
By Arya Roshanian
Revisit 1992’s 'A League Of Their Own Cast' Photos After The New TV Series
By Grace Wehniainen
Gassed Up Promises All Things Action, Risk, & Redemption
By Frances Stewart
What’s New On Netflix: 'Never Have I Ever' & 'Indian Matchmaking' Return
By Arya Roshanian
Get Even More From Bustle — Sign Up For The Newsletter