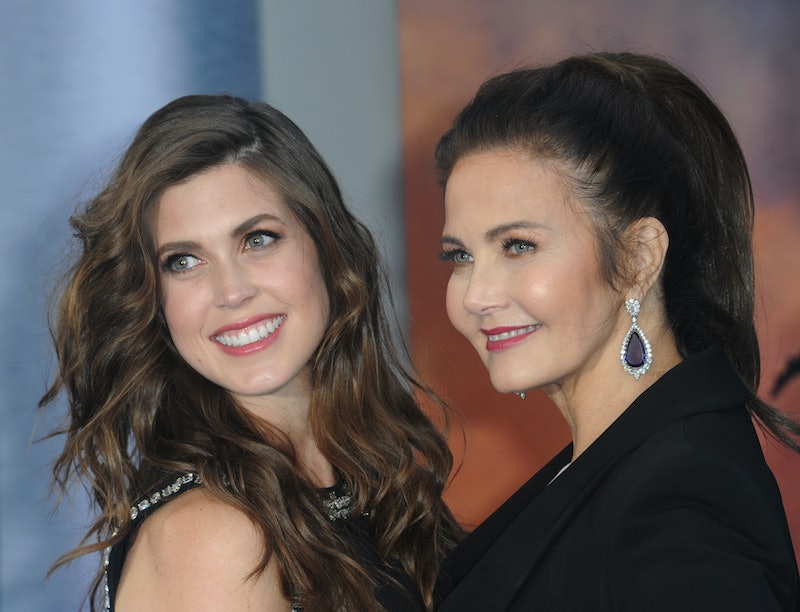 A real-life superhero introduced singer Jessica Altman to voting. Her first memory of voting was during the 2008 primary elections. She accompanied her mother in the early morning, and then went about her Maryland day as normal. Her mother, it’s worth noting, is actress Lynda Carter, who played Wonder Woman in the '70s television series.

“It wasn't about the superpowers. It was about her intellect, kindness, being able to protect herself,” Carter tells Bustle of the character. She sees those same traits in her daughter, who recently stepped away from a legal career to pursue music. “Being able to work and pursue music full time has just been a dream come true,” adds Altman, who released her debut EP, No Rules, in January.

This fall, the mother-daughter duo are using their platforms to encourage voting in the 2020 presidential election. “We have the opportunity to choose the direction that our country is going to take,” says Altman, now 30. “It's important for every citizen to use their constitutional right and have their voice heard.” Carter, in true superhero fashion, takes it a step further: “We have a rebel spirit and I intend to fight for our rights every step of the way.”

Carter and Altman, who both live in the Washington, D.C. area, are focusing on down-ballot races and propositions, like Proposition 208, or Arizona’s Invest in Education Act, which would increase education funding through a 3.5% income tax surcharge to wealthy individuals and families. (“We need to protect the public schools,” Carter says.) And they’re supporting women for the Arizona state legislature, like Mayor Coral Evans, Kathy Knecht, and Judy Schwiebert.

“They are doers. They are warrior women. They're public servants, small business owners, teachers," says Carter, 69. "They represent the needs of people, [and] that's what we need.”

More like this
Watch Jacinda Arden’s Devastatingly Honest Resignation Speech
By Sam Ramsden
Jessica Simpson On The Time She Was Pursued By A Backstreet Boy & An *NSYNC Member
By The Editors
At 28, Rosie Perez Risked Her Career To Stop Playing Stereotypes
By Gabrielle Bondi
Helena Bonham Carter Doesn't Think 'The Crown' “Should Carry On"
By Sam Ramsden
Get Even More From Bustle — Sign Up For The Newsletter
From hair trends to relationship advice, our daily newsletter has everything you need to sound like a person who’s on TikTok, even if you aren’t.