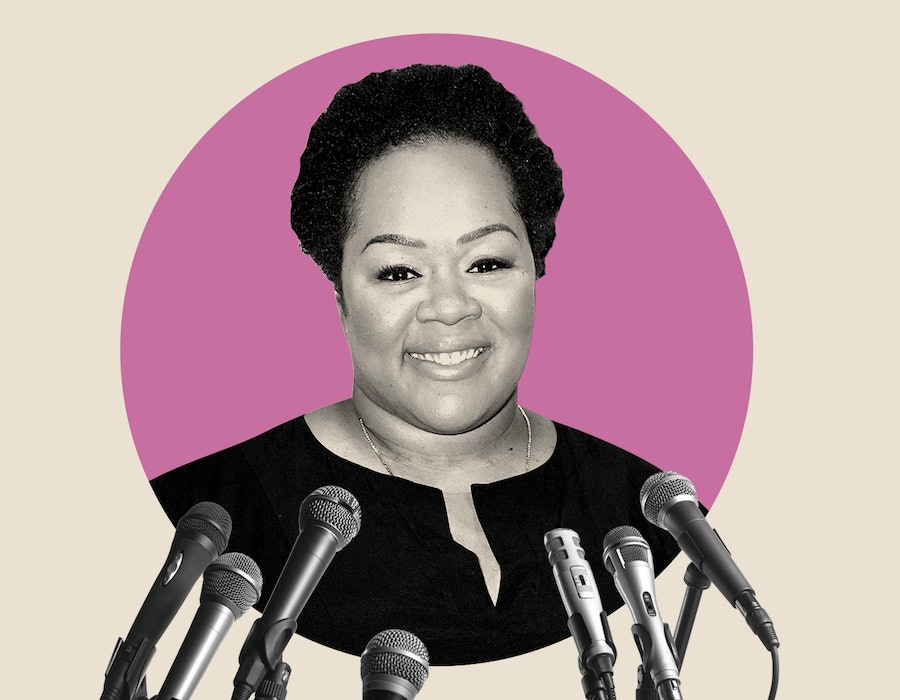 Yamiche Alcindor wishes her grandparents could see her now. Decades ago, before they immigrated to the United States, her grandfather worked as a notary in the palm tree-lined town of Saint-Louis-du-Nord on Haiti’s north coast. “Just two generations later, I am now questioning the president of the United States,” she tells Bustle, calling from her desk in the White House basement. “I can't imagine the pride my grandfather would have.”

Through it all, she keeps her family front of mind. “I am the legacy of my ancestors,” says Alcindor, 34, who was inspired to pursue journalism after seeing Jet magazine’s unfiltered coverage of Emmett Till’s murder. “[They] were just as fierce and just as amazing as me.”

The Miami native became a near-household name from Donald Trump’s press briefings, in which she was one of the former president’s regular targets. He called her questions “racist” and “nasty,” and famously sidestepped a question about whether his rhetoric has emboldened white nationalists. “I remember being prepared to continue to focus on the question,” Alcindor says of the encounter. “So many of my ancestors, my mentors, and my mother had all poured into me the confidence to pose that question.” (It’s a question, she says, that still needs an answer.)

Her unflappable responses have come to define her journalism: professional, persistent, and unwilling to be bullied. She talks to Bustle about her Washington Week predecessor Gwen Ifill, ambition, and coping with America’s original sin.

Tell us about the first time you entered the White House as a correspondent.

It felt heavy, like, “Oh my gosh, this is the White House, and I’m the child of immigrants [who] came to the United States believing in the American dream.” My family fled dictators, came to America with almost nothing, and had to learn a new language.

How did it feel to take the reins on Washington Week, an iconic D.C. news show?

When I was offered the opportunity, I got really emotional. I knew what it meant. It’s a Peabody Award-winning show. Such an honor. I thought about the role God plays, and what I’ve been able to achieve through his grace.

Since you’re constantly on the go, what do you always carry with you?

If I’m on the road, I need to have my phone, a pen and paper, and some water. Those are the four essential things.

Gwen [Ifill] told me not to make myself small, to lean into the idea that I know as much as everyone else around me, and that I earned [the right] to be in these spaces. We all can be a little nervous, like, Can I really do this? And the answer is yes — to anything. Whether you’re a Wall Street banker, a journalist, or a fashion designer, the answer is yes. You can do whatever you can put your mind to.

What advice would you give your 16-year-old self about the decision to pursue journalism?

I would say, Lean into you instincts, and know you can go wherever you want to go. People will question whether you’re good enough, but you’re always enough. You’re always smart enough. Take care of yourself and enjoy the ride.

Is there anything you’re still figuring out?

I’m still learning not to let other people’s expectations [of me] define how I see myself. I never thought I would be in this space, [and so] sometimes I need help owning it and embracing it. I call my mentors and say, “Is this OK? Is it OK for me to reach for this?” That’s something women struggle with all over this country, not wanting to be painted as doing too much or being too ambitious. We shouldn’t limit our goals to make other people comfortable.