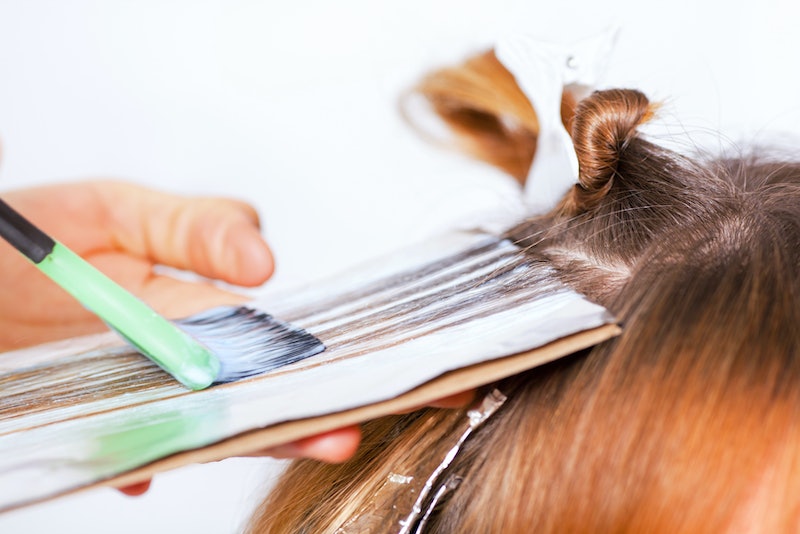 You've probably used hydrogen peroxide to clean a scraped knee, but turns out, the product could be a useful beauty tool. But you need to take certain precautions, and some online hacks — like how to lighten dark hair with hydrogen peroxide — are better best avoided, period.

Hydrogen peroxide is typically known for its safe and effective ability to clean and disinfect wounds. However, people are always on the hunt for DIY fixes to common (and expensive) beauty treatments, making the solution a go-to option for lightening hair, helping with acne, and even using as a mouthwash.

But do these uses work, and are they safe? Bustle spoke with experts like New York City-based dermatologist Dr. Hadley King and Kathy Debski, colorist at SPACE by Alex Brown in Chicago, to get the lowdown on whether or not you should actually incorporate hydrogen peroxide into your beauty routine. Turns out, there are both positives and negatives to some of the compound's uses. So before you soak your hair in hydrogen peroxide, gargle with a cap full of the liquid, or consider using it all over your face to treat acne, read on for what you need to know.

1. Can you use hydrogen peroxide to lighten your hair?

Earlier this year, Kaia Gerber admitted to lightening her hair using hydrogen peroxide, telling Refinery29 that she soaked it in the compound and blow-dried it. But just because it works doesn't mean you should try it.

Colorist Kathy Debski says hydrogen peroxide lightens hair by penetrating the strands' cortex and breaking apart the melanin inside and stripping dark color. Yes, this does cause a lightening effect, but it essentially corrodes the strand to do so — leading to frizz, breakage, and split ends. Debski adds that there's really no way to reverse the damage until your hair grows out.

But don't worry: If you've attempted this DIY lightener in the past, there are ways to manage any damage it may have caused. Debski recommends getting treatments like Kerastase Fusio-Dose in a salon. The product is actually five different boosters that target various elements of your hair, like density and radiance. In salons, stylists can mix and match the boosters to create a customized treatment for you.

If you're looking for something to do at home, she recommends Olaplex Number 3 as a pre-shampoo treatment, explaining that it rebuilds the bonds in your strands, making breakage less likely when you color, wash, or style your hair. Debski adds that Virtue shampoo and conditioner are also good options because they're made with keratin, which is what your hair is made of. This helps fill in any "cracks" in the hair strand.

So, can you use hydrogen peroxide to bleach hair? Sure. Should you? Probably not.

If using hydrogen peroxide in your hair isn't the greatest call, can you use it on your skin? New York City-based dermatologist Dr. Hadley King says yes, with a few caveats.

First, King says the compound should be used only as spot treatments for non-cystic pimples because it can kill not only bacteria but healthy skin as well. "At stronger concentrations, it can burn the skin," she says, adding that diluted hydrogen peroxide available over the counter can still be damaging and drying.

King points to studies that show 1% hydrogen peroxide can be even more effective than a traditional 4% benzoyl peroxide treatment — the topical ingredient typically used for acne — and cause less irritation. However, over-the-counter hydrogen peroxide at your local drugstore is typically a stronger 3% solution — in other words, don't start rubbing it all over your face every day.

"Regular over-the-counter hydrogen peroxide can be used occasionally to help dry up a pimple, but it should not be your regular, primary acne treatment," King says. "It's only a short-term solution and would only theoretically work on inflammatory acne, not blackheads, and not deep cysts."

If you need to dry up a pimple, Dr. King says to apply the solution onto a cotton pad and gently dab on the blemish up to twice a day but for no more than two days. She cautions, though, that doing so could irritate certain skin types, and she doesn't recommend it at all if you have a deeper complexion — higher concentrations of hydrogen peroxide (and continued use over time) can bleach skin.

3. Can you use hydrogen peroxide as mouthwash?

Although gargling with hydrogen peroxide doesn't exactly sound like fun and games, it may be effective, according to studies that have examined its ability to reduce gum inflammation. A 2011 study found that using the ingredient as a mouthwash was shown to reduce inflammation and redness, although it didn't help prevent plaque buildup. A 2012 review of studies came to the same conclusion, adding that the ingredient should be used in addition to a regular oral health routine of brushing and flossing.

If you want to try this, it's recommended to dilute your hydrogen peroxide with water (two parts water to one part peroxide). Gargle for 60 seconds, then spit out the solution, being sure not to swallow.

More like this
15 January 2023 Beauty Launches Our Editors Can't Get Enough Of
By Rachel Lapidos
6 Asian Beauty Rituals That Will Soothe Your Skin, Scalp & Mind
By Jennifer Li
The 9 Best Vagina Hygiene Products, According To ShowerTok
By Carolyn Steber
How To Curl Your Hair With Leggings, According To TikTok
By Carolyn Steber
Get Even More From Bustle — Sign Up For The Newsletter
From hair trends to relationship advice, our daily newsletter has everything you need to sound like a person who’s on TikTok, even if you aren’t.

This article was originally published on Jan. 29, 2015