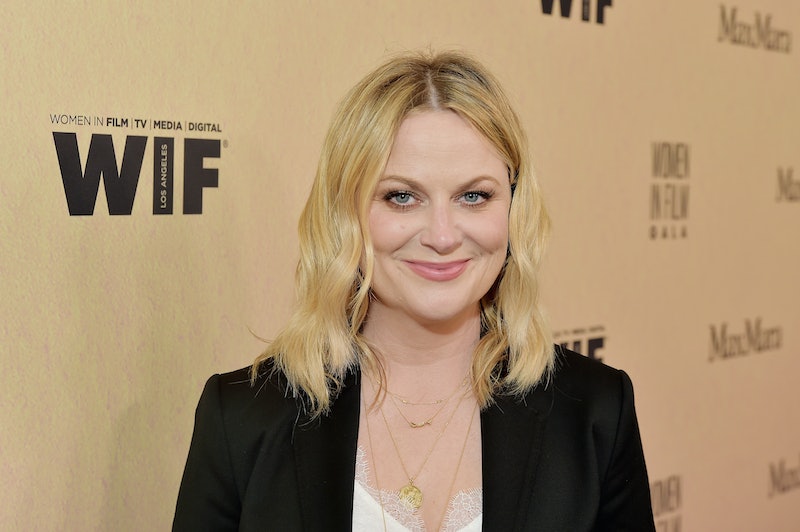 Amy Poehler is hosting the 2021 Golden Globes and looking as stylish as ever. Besides cracking jokes and delivering tons of laughs, she is also giving viewers '90s fashion inspo. Amy Poehler's Golden Globes 2021 outfit embodied peak '90s style from her velvet choker and black lace top to her sky-high platforms. And if this throwback ensemble didn't delight Gen Z enough already, Poehler threw in a middle part for good measure. Impressive.

Poehler had multiple outfit changes while hosting the Golden Globes, including a Moschino sequin button-down dress with a mock turtleneck which she wore on the red carpet. For that look, she kept her middle part but tucked her hair behind her ears for a sleek effect.

This is Poehler's fourth time hosting the awards show. Alongside fellow host Tina Fey, Poehler emceed the program in 2013, 2014, and 2015 before taking a hiatus for a few years. But unlike in years past, Poehler and Fey hosted from two different locations, with Fey in New York City at the Rainbow Room, and Poehler holding it down in California at The Beverly Hilton hotel. While that set up could make for some awkward moments, of course the ladies had a humorous take on the distance, even attempting to hold hands through the video screen at one point.

And like the fashion pros they are, they both chose memorable waist-up fashion moments featuring statement jewelry. Fey wore a pendant necklace with a blazer dress, while Poehler went for the aforementioned '90s choker and black lace combo.

Amy Poehler is dressing like a TikTok influencer now.

Add feathered bangs and she is ready for a '90s formal dance.

Every Detail Is So Delightfully '90s

Even the tights are giving me flashbacks to my last school dance.

Good Enough For A '90s Skit

If she started reciting lines from Charmed, I would not be mad at her.

The Highlight Of This Awards Show

Grunge is back on the red carpet and the runway. Time to pull out your old flannel shirts!

Side-by-side picture or it didn't happen.

It's all Tik Tok's fault.

Charlotte Russe was ahead of its time.

'90s teen angst is the mood of all moods.

Bring Back The Craft

If this outfit won't convince Hollywood to do a reboot of The Craft, nothing will.

Time to go search the attic.

Who Is Responsible For This Stroke Of Genius?

Give her stylist a raise.