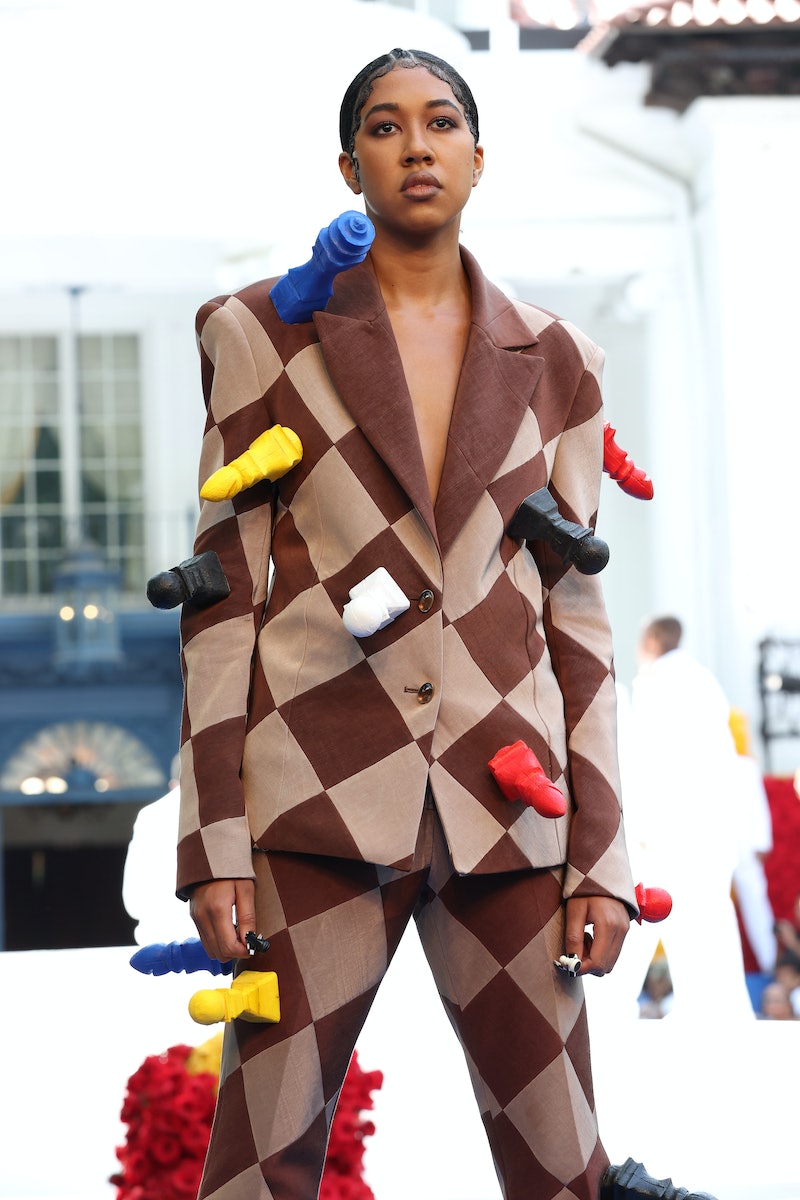 Every detail about the Pyer Moss Couture 1 show was intentional. It marked the first time a Black designer — founder Kerby Jean-Raymond — showed on the Paris Couture calendar. The location was the historic Villa Lewaro mansion in Irvington, New York, formerly home to Sarah Breedlove (BKA Madame CJ Walker), the first female self-made millionaire in the United States. The inspiration? 25 Black inventors selected from a list at the Library of Congress. The opening speaker was Elaine Brown, the first and only woman to lead the Black Panther party.

Even the model cast was thoughtfully chosen; model and fashion mogul Aoki Lee Simmons made her runway debut at the show. Her mother, Kimora Lee Simmons, once a model herself, founded Baby Phat, one of the first streetwear brands designed solely for women. (Aoki Lee now manages it along with her singer Ming Lee).

Simmons recognizes that, for a first-ever fashion show, Pyer Moss was a monumental choice. “It’s amazing to be swept up in a moment far bigger than yourself,” she tells Bustle. “I so admire that Mr. Jean-Raymond came to this opportunity boldly. I think it was a multi-layered call-to-action, a fearless reminder of the impact of Black culture. It shows that you can tell a serious story, make a strong statement, and do it in a joyful, creative way. Come for the couture, stay for the message.”

The message endured, despite a last-minute change in scheduling. On the day of the original show, Thursday, Jul. 8, torrential rain poured over the well-dressed audience seated outside the house.

I was among the crowd that day, my dress and shoes soaked but mood full of joy as the Pyer Moss team invited us to wait out the storm in the afterparty tent. There, we were treated to a cookout replete with soul food, free-flowing cocktails, and music that ranged from gospel to Afrobeats. As a Black editor that has spent many afternoons feeling isolated and unwelcome at a fashion event, Jean-Raymond’s cultural gathering felt like a family reunion. Yes, the rain was unrelenting but the consensus was that we were in a safe space; we knew we’d be taken care of.

Like much of the audience in attendance — including Bethann Hardison, Tracee Ellis Ross, and Jidenna — I had no intention of leaving early. That the crowd stayed for 3 hours in the pouring rain is a testament to the love fans have for Jean-Raymond and the Pyer Moss brand.

Having been mesmerized by the Spring/Summer 2020 show at Kings Theater in Brooklyn, featuring a gospel choir that sang Anita Baker as a marigold gown floated down the runway, I knew it would be well worth the wait.

Simmons agrees. “I’ve been a fan since I saw the Summer 2020 show,” she says. “The celebration and elevation of Black culture, Black music, and Black art really moved me. It was peaceful, elegant, and joyful, everything Black people in this country are often denied.”

On the rescheduled Saturday date for Jean-Raymond’s couture show, the sky cleared up. Simmons woke up early, feeling peaceful and excited. She prepped backstage, meditated, and then made her runway debut at one of the most celebrated and historic couture shows to date. Read on for her diary from behind-the-scenes of the Pyer Moss show.

A Harvard student who balances academia, designing, and now modeling, Simmons likes her mornings to be as peaceful and stress-free as possible.

“I’m an early riser and I try to start most days with yoga. I’ve been practicing for 15 years and I believe it’s the key to inner peace, graceful movement, and good posture on the runway,” she says, noting that she also likes to unwind at her mother’s Korean spa, Pellequr. “Self care is a tradition in Korean culture even if it’s a new buzzword in the West, I’m blessed to have grown up with that.”

Once fully-dressed and feeling zen, she boards a shuttle to Villa Lewaro for the show.

Next, it’s time to get ready backstage. “I’m in hair and makeup thriving off the hectic, passionate energy, and my third Celsius Energy Drink,” says Simmons. “People are moving a mile a minute: dancers, choreographers, musicians, lighting specialists, and an entire tech team dedicated to pulling off a live-streamed event outdoors. But instead of feeling scary, it feels like home.”

The energy brings back memories of the Baby Phat fashion extravaganzas her mother staged when she was a child. Back then, Simmons would appear at the finale, walking hand-in-hand with her mother and sister Ming Lee. “It reminds me of the little girl who loved the runway. Instead of being panic-inducing, it’s grounding.”

Simmons hits the catwalk in Look #8, a two-tone brown chessboard suit with colorful chess pieces attached. “My look was inspired by the game of chess and its origins in African, specifically Egyptian, culture,” she says. “As a game of strategy, chess represents not only the strength but the cleverness of Ancient empires, the nobility and intelligence of our ancestors which many have tried to discount.”

Before her walk, she does “some breathing practices” and a standing meditation in her white and black chessboard heels. “It was a long diamond-shaped runway and there was so much to remember, it felt like an obstacle course: shoulders back, cross your feet, swing your arms but not too much, stay in the middle of the runway, keep the same pace, hit your turns, pause at the end for three seconds ... oh, and look fierce!”

Once the fashion show ended, Simmons paused for a moment to take it all in. “The energy was one of huge release and awe of what we had all witnessed and been a part of,” she says. “Mr. Jean-Raymond is such a joyful person and artist, he really knows how to have fun and is generous with his joy.”

She hopes to follow her Couture show debut with runway appearances at New York Fashion Week in September. “I have always loved watching how models develop their signature walk and I hope to develop a style of my own.”

She’s also excited for the chance to balance fashion and academia, and sees it as an opportunity to inspire others. “I hope I can show another young woman of color like myself, that you can pursue many things no matter how counterintuitive they may appear. You can connect them, you can be the first to do so.”

As for the future of fashion, Simmons sees it evolving to be “more accessible, more sustainable, and more technological.”

“Fashion is creativity, it’s walking art. But it means so much more when it is used as a platform to shape our worldview. Real fashion isn’t just clothes for the sake of clothes. It’s an illustration and an interpretation of the world around us, and at its best, it shows us where we want to go.”