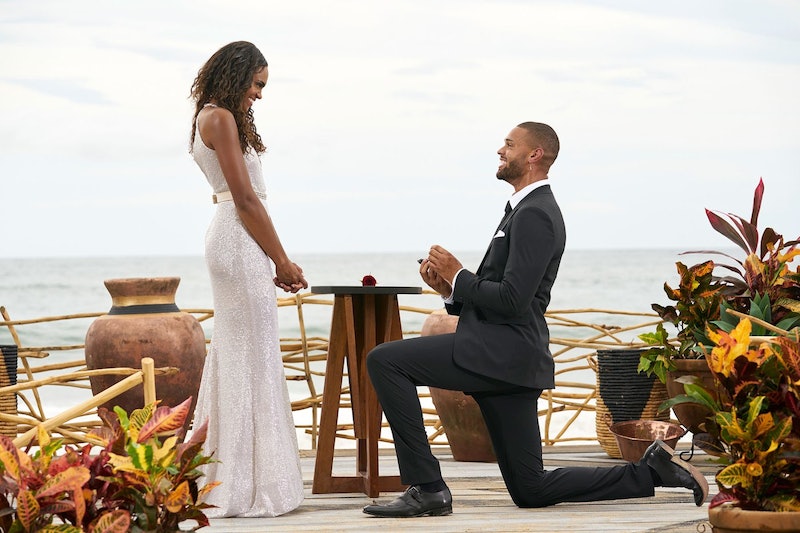 The Bachelorette’s Michelle Young is officially engaged, accepting a proposal from Nayte Olukoya on Tuesday’s season finale. Olukoya popped the question seaside in Punta Mita, Mexico, with an engagement ring as stunning as their surroundings.

For his proposal, Olukoya worked closely with designer Neil Lane to choose a platinum and diamond ring with a 3.2-carat pear-shaped stone. The ring features 46 round, brilliant-cut diamonds and two tapered baguette diamonds along the band.

Lane opened up about the ring details to People, sharing that they incorporated both vintage and modern design flourishes. "Usually from the 1930s to 1960s, most rings had tapered baguettes,” says Lane. “They were really a mid-century design.” He added that the classic touches had a special meaning especially for Young. Lane and Olukoya “went back in time because she's a classical beauty."

The jewelry expert brought modernity to the design with the shape of the ring. "I also wanted to do something very modern and very relevant today with a pear shape,” says Lane. “The little tiny diamonds of halos around it, again, bring it back to a vintage thing, which they did in the early 1900s.”

Olukoya looked at six different rings before landing on a design fit for his new fiancé, according to Lane. It paid off as Young proudly showed off the ring in photos during the live “After The Final Rose” special.