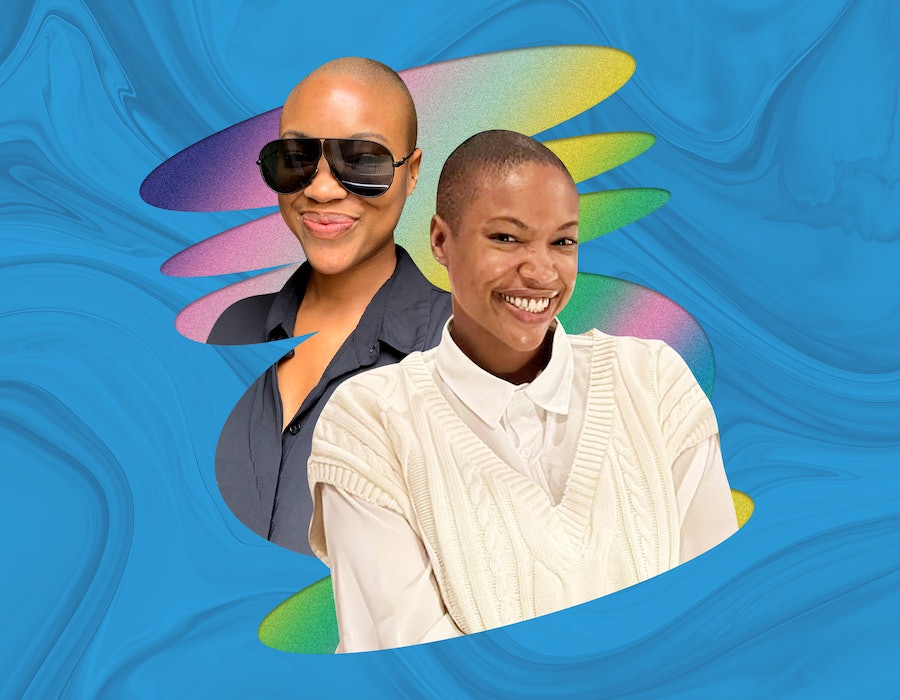 Brennan Nevada Johnson, a 30-year-old tech publicist, shaved her head 11 years ago as a junior in college looking for an easier and less expensive hair care regimen. As someone who has worn a number of edgy hairstyles, including a mohawk and an asymmetrical bob, she figured this would be another cool ’do to try out. But, after several months with her new hair, Johnson discovered there was a deeper meaning to being bald. Here, she shares what she’s learned with Bustle editor Rachel Lapidos.

My mom had a close cut. I had her to look up to, and I was always a fan of celebrities like Eve, Grace Jones, and Amber Rose. Seeing these Black women be so strong and confident in their own skin was like a magnetic force pulling me to shave my head.

As women, our hair is so tied to our worth and how feminine we are, and it’s because of misogynist standards that have been put onto us. So when I first went bald, I remember people being like, “How is this affecting your love life?” There was this stigma about not being able to attract the same type of person that I would’ve when I used to have hair. But it’s made me feel so empowered because there’s nothing to hide behind.

I love the idea of wigs and weaves, but being bald has been a game-changer — I’m embracing my natural roots and not conforming to male or white European standards. So many Black women spend so much money trying to get their hair to not be its natural texture. When I first went bald, there weren’t as many Black women as there are today who were ready to get the clippers and shave their heads. Back then, I would go down rabbit holes to see what other Black women were bald. But African women have been doing this for centuries.

For me, being bald makes me feel closer to my ancestors. A lot of that history was wiped away with slavery.

The history of baldness made its way into America from the Black Power movement in the ’60s and ’70s. During that time, there were photos of Afros and women starting to do the big chop — which is when Black women cut their hair because it was so damaged from putting in products to make it look like a white person’s hair.

In 2020, Massachusetts Representative Ayanna Pressley made headlines by going bald. Even though she had alopecia, she was hiding behind wigs and weaves. Black women can relate: We’ve been afraid to put ourselves out there because of these racist standards. Times are finally changing. Black women are like, “You know what? I’m done with wigs and weaves and anything that’s not allowing me to embrace my natural roots.” For me, being bald makes me feel closer to my ancestors. A lot of that history was wiped away with slavery.

It’s great to see baldness get even more mainstream with women like Tiffany Haddish, Saweetie, Jada Pinkett Smith, Summer Walker. Over the past three years, I’ve also seen a lot more women with shaved heads walking down the street in my neighborhood. It gives Black women a long-awaited feeling of freedom; we’re no longer in the box we’ve been put into.

One of the best ways a Black woman can really, truly love herself and embrace herself is through our hair because we’ve had to conform for so long. I celebrate every time I see another woman with a shaved head. When you think about the true definition of beauty, it’s confidence: So whenever you see a woman who has shaved their head, it’s a total representation of that.