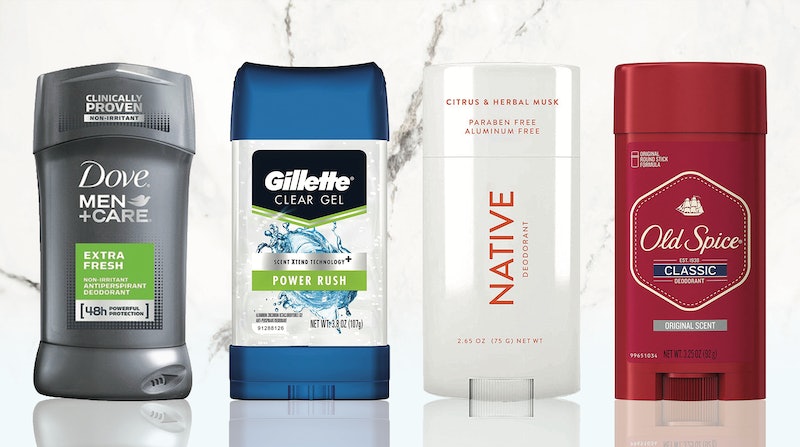 Because gender is a construct and everybody sweats, the best men’s deodorants for women are really just the best deodorants in general, with a particular (read: stereotypically masculine) scent profile — they’ll lean spicier and citrusy-er, rather than powdery and floral. That said, researchers have found that biological men legitimately sweat more than women, so some women find that antiperspirants marketed for men are more effective than those marketed toward women.

Quick semantics lesson: Though they’re sometimes used interchangeably, “deodorants” and “antiperspirants” are not the same. As the name literally says, deodorants contain antibacterial ingredients that help neutralize body odor (i.e., de-odorize). They typically contain ingredients that absorb excess sweat, too, but they’re probably not powerful enough to control excessive sweating. For that, you need an antiperspirant: They contain aluminum, which “forms a plug that blocks sweat output,” according to the International Hyperhidrosis Society (aka the final word on sweating).

With that in mind, all the antiperspirants featured ahead contain deodorizing ingredients (barring a clinical-strength antiperspirant), so they’ll stop you from both sweating and smelling. But if you’re looking for an aluminum-free option, go for the “natural” picks, which can be less irritating on sensitive skin.

Scroll on to shop the best men’s deodorant for women, or anyone of any gender identity, biological makeup, or sweatiness quotient.

The spicy-clean scent of Old Spice deodorant reminds me of all the boys I (thought I) loved before, and I’m confident the scent memory will remain for the rest of my natural-born life. I also used to wear it myself — a testament to my obsession with certain boys, but more importantly to the scent’s wearability, thanks to its layering of classically “masculine” fragrances (musk, cedar, ambergris) and “feminine” notes (like jasmine and vanilla). This order of six costs just under $17 on Amazon, and will likely last you for the next few years, depending on how much you sweat.

Bustle's very own Commerce Editor, Amy Biggart, is also loyal to the 83-year-old brand, though she prefers this Pure Sport version over the original. "I’ve been using Old Spice for over a decade. I’ve tried a few of their deodorants over the years, and while their classic deodorant can have an overpowering scent, Pure Sport is my tried-and-true favorite. It does an incredible job of minimizing sweat and odor (I’ve worn it all day and through intense workouts and it gets the job done), and has a faint scent that’s clean and slightly sweet,” she says. Get this three-pack for just under $10; likely enough to last you a year.

Most natural deodorants are powerless in the face of excessive sweating, in my anxious sweat-filled experience, but Native deodorant is by far the most effective one I’ve tried. It won’t truly curb sweating — an important caveat — but it does make me smell a billion times better, and for much longer, than other natural deodorants out there. The aluminum-free formula contains things like tapioca starch to help absorb sweat, baking soda to neutralize odor, and coconut oil and shea butter to soothe and moisturize your skin, so you can feel good about reapplying a few times throughout the day. All their scents are lovely (and unisex), but Citrus & Herbal Musk strikes the right balance between traditionally masculine and feminine fragrances.

This Every Man deodorant is aluminum-free, vegan, made of 99% naturally derived ingredients, and actually does what it’s supposed to, according to Bustle's Associate Commerce Editor, Carina Finn. "I love that they're plant-based, and the witch hazel is great for sensitive skin,” she says. “The cedarwood and sandalwood scents are very clean and woodsy, not overwhelming like a lot of natural deodorants with more floral scents.” She also likes that these sticks don’t leave stains on dark clothes, and she confirms that it withstands serious physical activities, like long hikes and intense workouts — a rarity for natural deodorants.

The gel vs. solid stick debate is really a matter of preference, since they both do the same thing (e.g. suppress sweating for a few hours); but in their favor, gels don’t leave behind a white residue on your clothes or skin, they don’t clump, and they typically feel lighter than solids. If you’re on team gel, try Gillette Power Rush Clear Gel. It gets universally good reviews from people of all genders, who confirm that both its fresh scent and antiperspirant powers last through hours of intense activity, including jobs that involve manual labor.

Among all the antiperspirant conduits, sprays are probably the least likely to stain your clothes. This Degree spray promises not only to prevent white marks from showing up on dark clothes, but also to protect your white tops from yellow sweat marks. Feedback is mixed on the anti-yellow-staining front, but Amazon reviewers say it’s much more powerful than other sprays, which can be a little weak. Not so with this one: One person with hyperhidrosis reported that it holds its own through intense workouts, while a female reviewer who has sweat through other deodorants confirms that it “lasted all day and well into the next one.”

This Certain Dri clinical strength antiperspirant is the most effective over-the-counter treatment for excessive underarm sweating, including diagnosed hyperhidrosis (something people of all genders can experience, as should be clear by now) — it’s the only prescription-strength antiperspirant you can get without actually having a prescription. It contains 12% aluminum chloride, which researchers find to be the strongest active ingredient in treating axillary sweating. This doesn't contain any deodorizing ingredients, so you'll still need to apply a true-blue deodorant if preventing odor is a concern. For best results, apply a small amount to dry skin at night, which allows the aluminum chloride to thoroughly penetrate your pores. And do a patch test first, especially if you have sensitive skin.

This dermatologist-approved Dove antiperspirant is a good choice if you need a fairly intense antiperspirant, but find the really heavy-duty stuff too irritating for your skin. This contains aluminum as the active ingredient, which makes it so effective, but the moisturizing formula is gentler than most other antiperspirants out there. Castor oil and sunflower oil help neutralize dryness and irritation, and dimethicone and silica provide even more gentle sweat protection. This Extra Fresh scent does, in fact, smell very fresh, but it’s not sickly or overpowering.

Of all the men’s deodorants on Amazon, Mitchum deodorant seems to boast an especially large (or at least vocal) contingent of female fans, one of whom has been happily using this classic brand since she was “a teenager in the 60s.” Another said this actually worked better for controlling sweat than clinical-strength antiperspirants, and others like the brand’s light, clean scents. Plus, unlike most other deodorants that are sold online in value packs, you can buy a single tube of Mitchum for less than $5 on Amazon, if you're not looking to stock up.

Jack Black deodorant: Because your armpits deserve to feel fancy, too. I used to steal this deodorant from my dad when I was in high school, and I still use it (and acquire it through legitimate means) for its spicy-citrusy-woody scent and super-smooth glide, courtesy of vitamin E and aloe. Pit Boss has aluminum in it, which helps with sweat protection, but you can opt for Pit CTRL if you’re looking for an aluminum-free deodorant with the same irresistible scent.