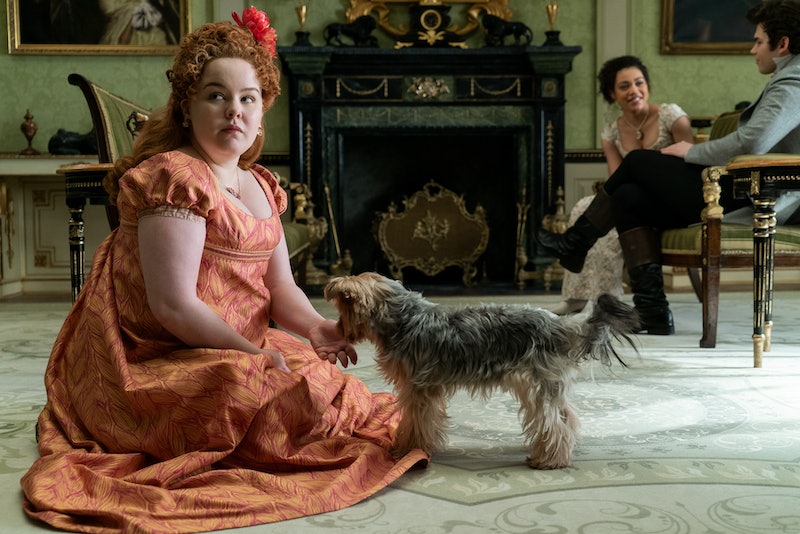 Warning: spoilers await. Actress Nicola Coughlan just revealed a major Bridgerton easter egg, of sorts, that you probably didn’t notice when you first watched the show. And it all comes down to one strategically-placed accessory. It seems that it might be time to binge the entire series again.

Coughlan took to Twitter last week writing, “Ok I’m just curious, has anyone spotted the massive Easter Egg about Penelope in the very first scene of Bridgerton?” She later gave a clue, adding, “When I filmed Penelope’s first scene I chose a prop, a massive massive feather that looked a lot like...” And then, she left her fans to debate.

The feather Penelope wore in her hair was a nod to the quill that Lady Whistledown uses to write her gossip news and — stop reading here if you haven’t yet watched the series — Featherington is Lady Whistledown. Well, atleast that's what it seemed like at the end of Season One. It all makes sense now.

With the giant wigs, puff-sleeve dresses, and period-centric structured gown silhouettes, it seems easy to have missed a feather in Coughlan’s hair within the first half an hour of the series. Or, at very least, to just chock it up to a wardrobe choice and not a sign of things to come. But as costume designer Ellen Mirojnick told Bustle, the wardrobe was full of hidden clues and references about the characters.

Mirojnick said Penelope's bold colors and accessories symbolized her "audacious" personality, while her best friend Eloise was conversely drawn to soft colors but sharp tailoring. “For Penelope, I love the mix of colors of the embroidered flowers over her yellow dress," Mirojnick says. "The addition of floral accessories and feathered hair accessory perfectly defines Penelope. In contrast, the Eloise look is refined, soft in color but tailored and set off with a double breasted Spenser jacket. Her look has the right amount of feminine balance with masculine suiting — perfect for Eloise.”

With this latest easter egg reveal about Penelope's wardrobe, it begs the question: how many more clues exist in the wardrobe of the series that hasn’t even been revealed yet? Only time — or another few binges — will tell.