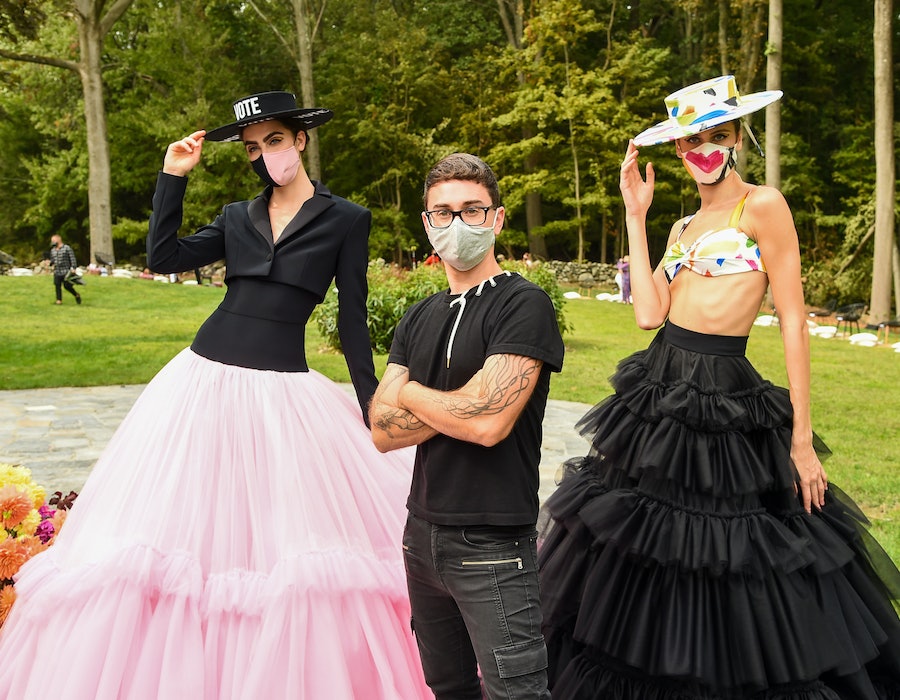 What happens when a fashion designer trusts his muse entirely? Anything, and that’s precisely the point. Last week, Christian Siriano presented his Spring 2021 ready-to-wear collection, welcoming a small group of industry tastemakers to the lush greenscape of his Connecticut home, where the socially distanced runway show took place.

The clothes, of course, were beautiful — each look adorned with a matching mask that served as a nod to the reality of our present moment. But it wasn’t just the gowns that got people talking. Coco Rocha, who’s walked in many a Siriano show before, served up quite the finale when she went for a swim in the designer’s pool while clad in a red ballgown worth $10,000.

“It wasn’t really planned,” Siriano tells Bustle. “Every time Coco’s in the show, I let her be her. That’s why she’s an amazing supermodel.”

According to the designer, Rocha had brought up the possibility of an impromptu swim prior to the show. “She was kind of like, ‘What if I just got in the pool?’” Siriano recalls. “But I wasn’t really thinking about it at the time. It was fabulous though. She’s so awesome because she’s down for anything and literally seven months pregnant — wild.”

The spontaneous moment instantly made headlines, a fleeting moment of levity in a year that’s felt unbearably heavy and somber.

“It was something dramatic,” Siriano says. “It’s escapism and this idea of trying to remember that fashion could be fun and playful and fantasy and all those things, so I think that must have been on her mind.”

As for the current state of the dress? “It’s actually looking good,” he says, sounding somewhat pleasantly surprised. “It’s hanging out to dry. I think it’s going to be okay.”

This season, Siriano partnered with Lowe’s to help bring his ultra-glam backyard picnic vision to life. A makeshift runway was placed across the pool, which was dotted with vibrant floral arrangements in shades of sunshine yellow and hot pink. His curated edit with the home retailer is now shoppable online.

The Project Runway star initially didn’t plan on hosting a runway show at his home. But he later decided that if he was going to move forward with a production this season, he wanted it to feel distinctly personal. Plus, asking guests to make the trek from New York City to the suburbs presented an opportunity for people to get away — even if only for a few hours.

“I knew that no matter what, whether it was going to be digital or whatever I was going to do, I wanted to do it at my home, because we’ve all been at home,” Siriano shares. “I wanted to make it more personal. I didn’t want people to just go to a fashion venue. That just didn’t make sense for me.”

While guests were relegated to the outdoors due to safety regulations, Siriano did open up his house for the cast and crew, which turned out to be rather amusing for the designer who is used to dressing models in cramped, chaotic backstage spaces.

“I actually loved having the models getting ready in my dining room and in my kitchen,” he shares. “I love that my backstage photos are in my kitchen. It’s hilarious, but I love it.”

With his collection of playful sets and voluminous skirts inspired by Alicia Silverstone's iconic character Cher from Clueless, he wanted to convey a sense of hope and possibility, even in these dark times.

“We can still dream and have inspiration,” he says. “Because the world is a tough place right now, that is so important. We wouldn’t survive as a culture without a little bit of escapism. That was the idea here: to transform people’s imagination a little bit for a moment.”