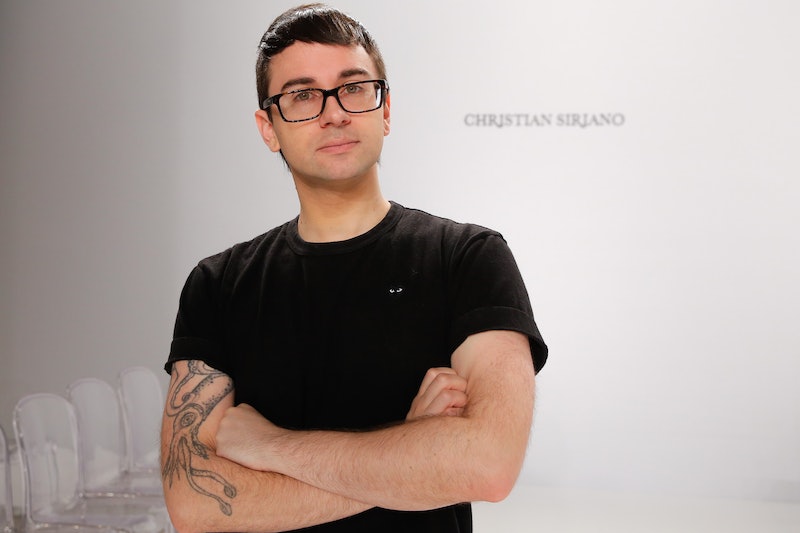 Since launching his namesake label in 2008, Christian Siriano has risen through the ranks of the fashion industry, becoming one of the most formidable and celebrated designers in New York. He's also a pioneer when it comes to size inclusivity, dressing all body types long before it became a regular topic of conversation. That commitment to diversity was on full display at his Fall 2020 runway show during New York Fashion Week, where Siriano debuted an extensive ready-to-wear collection with a distinct, rock ‘n’ roll edge.

“This collection was first inspired by Birds of Prey, specifically when Harley Quinn was running through a dark, abandoned carnival fun house,” Siriano tells Bustle. “This allowed me to experiment with a mythical and gothic collection. I also used Dadaism art movement to grab inspiration through the sculptures, form, futurism, and expression. I wanted to make sure my collection was a mix between modern and elevated, but playful and youthful.”

In addition to teaming up with the DC Extended Universe (the film sponsored Siriano’s show and lent set pieces as decor), he worked with BMW, the official automotive partner for NYFW. Now in its second year of the partnership, BMW debuted a digital content series highlighting four fashion industry heavyweights and the unconventional paths that led to their success. The film content series, Road Less Traveled, featured Siriano alongside Halima Aden, Jason Wu, and Zanna Roberts Rassi.

It was a partnership that felt natural to Siriano, who’s well-known for his regal designs. “BMW is the essence of beauty and class, which is something I always strive to show through my collections, so it makes for a great collaboration,” Siriano explains. “In the film with BMW, Road Less Traveled, we talk about what it takes to pave your own path in this industry, and that’s something I’m always trying to do. I always want to do the things people say I can’t do, the things that are unexpected.”

True to form, Coco Rocha closed Siriano’s Fall 2020 show in unexpected, dramatic fashion — so dramatic that she had her own personal hype woman in Leslie Jones, who cheered from the front row. “I really got to play around with different fabrics, textures, and silhouettes, which makes every piece really unique,” Siriano shares. “I love so many it’s hard to choose [a favorite].”

Like many of his peers, Siriano was tasked with preparing for his Fall 2020 show alongside his usual awards season duties. What was it like balancing the tasks of dressing celebrities and gearing up for NYFW?

“It was all really overwhelming and so hard to balance it all, but I am decisive [and] move quickly,” Siriano says. “[I have] an amazing in-house team that works very hard, and we are all able to make it happen in the end.”

One of Siriano’s most memorable red carpet moments came at the 2019 Oscars, when Billy Porter famously arrived wearing a custom tuxedo gown. Although it’s since become a cultural touchstone, even Siriano himself couldn’t have predicted its long-term impact.

“We knew it would be a moment, but didn’t realize how instantly iconic it would be,” he says. “We just had fun creating it and didn’t overthink it too much and made history in the process. I just wanted something elegant, chic, and powerful.”

Most recently, Porter wore the dress again in a guest appearance on Sesame Street. But his look drew criticism from people who believe the show is pushing an agenda that is somehow inappropriate for children. Siriano adamantly disagrees.

“Billy’s gown has changed the lives of so many children around the world who have a hard time coping with gender norms,” he says. “It was a great idea to have him on such an important children’s show. I think it will help change lives for so many, and I know that it’s not going to hurt any[one].”

As one of the few luxury designers who values inclusivity, Siriano has unique insight into the fashion industry's progress toward embracing shoppers of different sizes, races, and gender identities. It’s happening, he explains, although designers' collective silence on the subject is becoming harder to ignore.

“People are starting to welcome it more and become a little more open, which is refreshing to see, but of course we can all do more,” he says, referencing size diversity on the red carpet in particular. “A lot of brands [are] doing nothing, but for some reason they get a pass, so that is very interesting.”