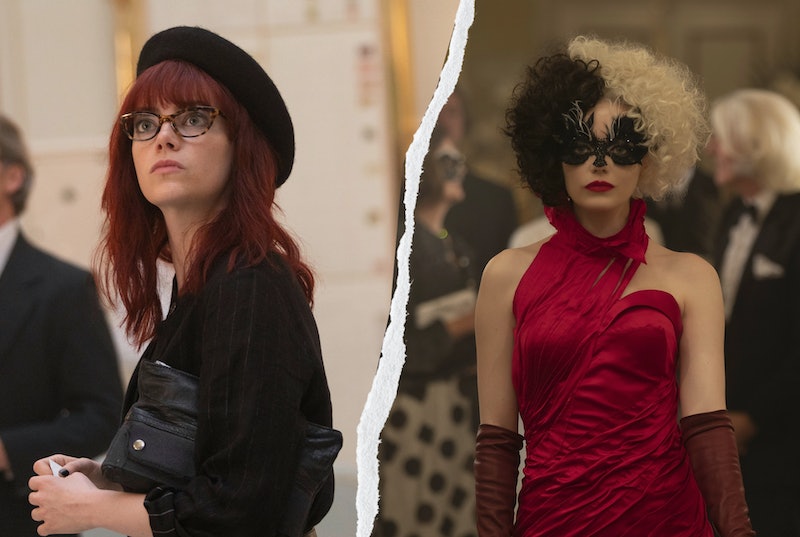 It’s been nearly 25 years since Disney released 101 Dalmatians starring Glenn Close as Cruella de Vil, the fur-obsessed fashionista who went to extreme lengths — aka stealing and skinning puppies — for a Dalmatian-spotted coat. If, since then, you’ve been curious about what made Cruella quite so, well, cruel, a new film is here to explain. Out May 28, Cruella sees Emma Stone step into the villain’s iconic black-and-white ensembles for an origin story that’s less about the how, and more about the why.

In the film, we meet Estella — she doesn’t adopt Cruella as her moniker until later — in 1970s London, where she’s trying to establish herself as a formidable fashion force in the city’s punk rock revolution. As she receives more recognition for her work as a fashion designer, trouble comes with it, and it’s through this arc that we see her style evolve from preppy school girl to the grandiose and jaw-dropping style icon Close introduced us to in 1996.

With fashion such a central part of the story, Disney tapped a pro for the job of building out the film’s style credentials. Enter Jenny Beavan, a two-time Academy Award-winning British costume designer who worked on Gosford Park, Mad Max: Fury Road, and The King’s Speech. Beavan is an industry legend, but in a film about fashion designers, she’s keen to draw a line between what she does and what we see the characters do on screen.

“I’m not a fashion designer, I’m a storyteller with clothes,” she says when we speak over Zoom. “In fact, in my real life, I have no interest in clothes. I just love telling stories with them. So for me, [working on Cruella] was just brilliant. There were these beautifully written characters that you could just get your teeth into.”

Ahead of the film’s release, Beavan shares the story behind four of Cruella’s key looks.

“There’s a real arc for her, and hopefully we [captured] that arc as you see her change from a child, where she’s obviously anarchic and rebellious and does things to her school uniform. My wonderful associate designer Sarah Young’s sister was quite an inspiration for that because she used to turn her blazer inside out. And I think when she gets to [work for] the baroness, who is a little old-fashioned but a very good designer, she learns quite a lot and hones her skill.”

“We know where [Cruella] ends up about 15 years later — as Glenn Close, obviously. And so in my mind, it had to just be possible that this character could become that character. The inspirations were various because she's so diverse in all her different looks, [but mainly] people who have spoken of punk things: [Vivienne] Westwood, [Alexander] McQueen, and [John] Galliano.

“I wanted to do an homage slightly to this modern [practice] where we are now reusing stuff and making [new clothing]. That’s the whole red dress thing, which she makes out of a dress she finds in Artie’s vintage store. We did that a lot. I remember putting [tears] from Liberty fabric into my Levi’s jeans.”

“[We worked with the] wonderful Kirsten Fletcher who’s an amazing Australian maker and has won the World of Wearable Art for New Zealand. And she did the three photobomb dresses as well as many other things. But I have to credit her with [the garbage dress] because it worked, and we only had a one-off of it.”

“With the baroness, [her style] became terribly clear once you get into that mindset of who she is, where her influences came from, and her current situation: all those great ‘50s and ‘60s fashion designers.

“And [the Baroness herself] is a very good designer, she’s just slightly past her sell by date. But in working with a maker called Jane Law, we just found a style for her, and it was obviously asymmetric, very fitted, and very snobbish.”

More like this
Behold: The Wildest Fashion Moments of 2022
By Dominique Norman
Twitter Can’t Get Enough Of Lewis Capaldi Creating Fashion Looks For ASOS
By El Hunt
10 Holiday Fashion Picks Our Senior Editor Can't Stop Wearing
By Kelsey Stiegman
Cyber Monday Deals 2022: The Best Fashion Sales To Shop
By Dominique Norman
Get Even More From Bustle — Sign Up For The Newsletter