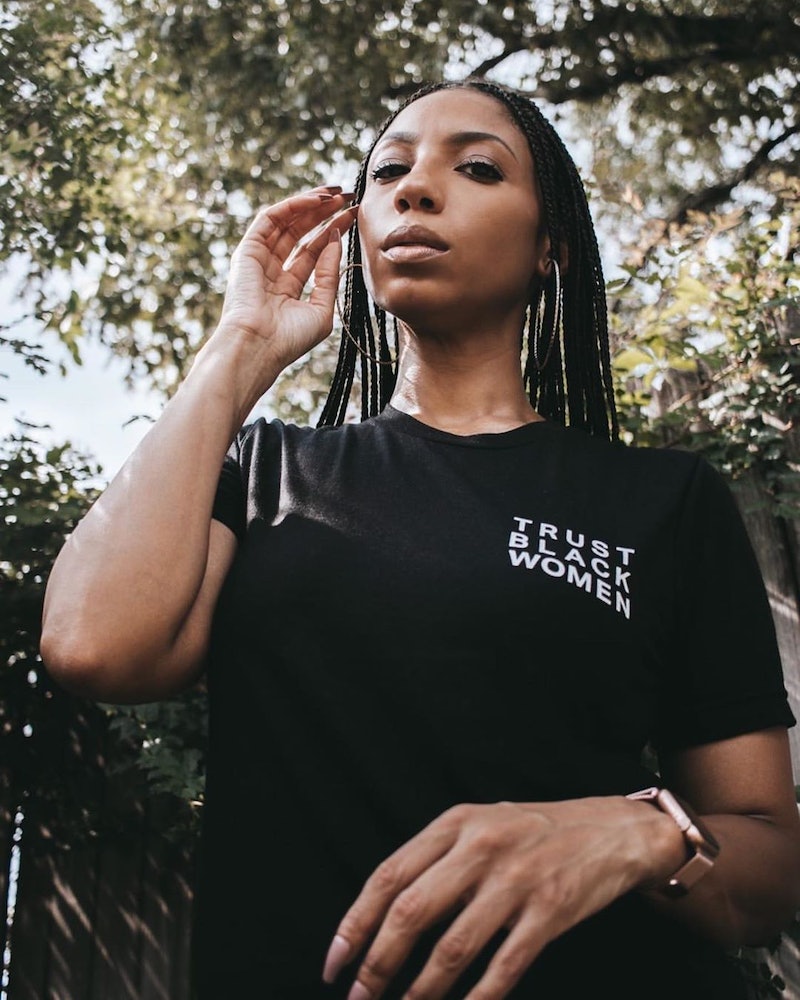 Courtesy of District of Clothing
Sponsored
Amplifying Our Voices

The brand behind that viral "Trust Black Women" shirt first came to Dionna Dorsey in a dream.

“I woke up in the middle of the night,” Dorsey tells Bustle. “In the dream, I kept seeing the early stages of what you now see. I didn’t know what it meant. I just knew I had this idea in my head and had to get it down.”

That idea became District of Clothing, a Black woman-owned lifestyle brand built on the themes of progression, action, and self-love. Dorsey officially launched the brand in 2014, a move originally intended to be a low-stress side hustle.

Although Dorsey was working full time as a sought-after creative director in Washington, D.C., she had a previous career in fashion. She studied fashion design at Istituto Marangoni in Milan before a stint in New York City, where she worked on outerwear for Oscar de la Renta and men’s apparel for various other labels.

“I remember sketching out more ideas,” she says. “I had lost my prime client, and I wanted to put something positive into the universe. I thought, ‘I can build a website in my sleep, and my background is in fashion.’ It all came together thankfully.”

In the past six years, Dorsey has produced several collections and partnered with organizations like Planned Parenthood to give back to important social causes. Her designs — like this “Trust Black Women” T-shirt that’s been making the rounds on Instagram — have skyrocketed in popularity this year as the country faces a racial reckoning not unlike the Civil Rights Movement of the 1960s.

And this reckoning is happening in tandem with a milestone election year: Last week, Senator Kamala Harris of California became the first Black and South Asian woman to accept a major party’s nomination for vice president.

It’s fitting, then, that District of Clothing’s roots are in the nation’s capital, where Dorsey grew up and spent many of her formative years.

She recalls that as she got older and spent more time riding in the front seat of cars, she’d notice the “no taxation without representation” quote that’s on all license plates registered within the District (D.C. residents pay federal taxes but do not have voting representation in Congress).

Experiences like those deeply influenced her personal politics and belief system, and are a big part of why her brand has a political bent. “As I’ve gotten older and understood more about racial justice and people having the ability to vote, I feel very strongly about it,” Dorsey says.

In 2020, the importance of Black women in the political process is more critical than ever, which explains why Dorsey’s designs are resonating with so many. The entrepreneur won’t take all the credit, though, and says that her eye for style came from the fashion-forward women in her family.

“When you’re talking about emulating style, it would have to be the women who raised me — my mom, my aunt, my grandmother Carrie Dorsey, who is just the flyest woman on Earth, even at 92,” she shares. “Being a Black woman is essential to everything I do and all that I am. It’s the linchpin of my essence and informs my entire existence in this beautiful world.”

More like this
Gigi Hadid Has Been Wearing UGG Boots Nonstop At Paris Fashion Week
By Dominique Norman
The 30 Best Fall Fashion Finds, Straight From Bustle Editors
By Kelsey Stiegman
Genius T.J.Maxx Shopping Hacks For Sales On (Almost) Everything
By Kelsey Stiegman
10 Corsets That *Actually* Work For Big Boobs
By Bella Gerard
Get Even More From Bustle — Sign Up For The Newsletter