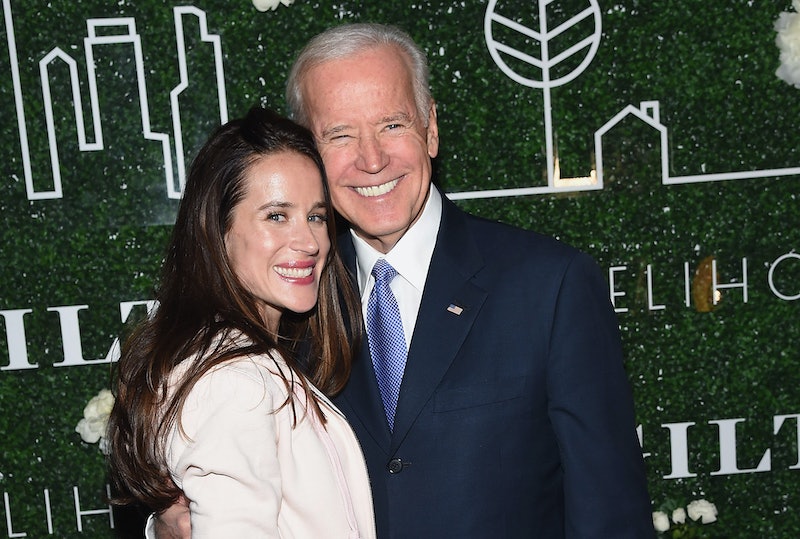 With the election now in our collective rearview mirror and a Joe Biden presidency on the horizon, we can finally start looking to the future. In just a matter of weeks, a new First Family will occupy the White House, which means it’s time to start familiarizing yourself with the big Biden crew. And if you're a lover of fashion, you'll be especially interested in First Daughter Ashley Biden's clothing line.

Yes, Ashley Biden is one of the surviving children of Joe and Jill Biden, along with a son Hunter. In 1972, the president-elect’s first wife, Neilia, and their newborn daughter Naomi were tragically killed in a car accident. Hunter and his brother Beau were in the accident as well, but they survived after weeks of being hospitalized. However, tragedy struck the family again in 2015, when Beau passed away from a rare form of brain cancer.

Undoubtedly, the Biden family has persevered through some horrifically dark times. But they are not defined by these tragedies or their grief, which is perhaps best illustrated by their professions. Joe, obviously, has been a public servant for nearly 50 years. Jill has been a teacher her entire life, and plans to continue teaching even once she officially steps into her role as First Lady. Ashley is following in their footsteps with a successful fashion label with a social justice slant.

So, when it comes to the soon-to-be First Daughter, what can we expect to see from Ashley Biden? You may be surprised to learn that she’s got connections to the fashion world. Read on for more.

Who is Ashley Biden?

The daughter of Joe Biden, Ashley proves that public service might just run in the family. She has a master’s degree in social work from the University of Pennsylvania, and she spent 15 years as a social worker for the Delaware Department of Services for Children, Youth, and their Families.

She also served as executive director of the Delaware Center for Justice, an advocacy group that works to “facilitate fresh starts for victims of crime, youth at risk, and the incarcerated,” according to the organization’s website.

What does Ashley Biden do for a living?

Ashley transitioned into the fashion world in 2017 when she launched Livelihood, a clothing brand that aimed to raise money for community groups in Wilmington, Delaware — her hometown — and Southeast Washington, D.C., where she began her career as a social worker.

The initial collection included a line of hoodies in neutral shades made from organic cotton, which were manufactured in the United States.

“I chose a hoodie because it is universal,” Ashley previously told Washingtonian, explaining that hoodies were “once ubiquitous with the labor movement.”

Does Ashley Biden have a clothing line?

At press time, the website doesn't appear to be functional, but there are currently no reports about it officially closing down.

She was still designing in June 2019, when she tried her hand at creating uniforms for a swanky D.C. bar at Hamilton Hotel. They were “quite nice,” according to The Washington Post’s Robin Givhan, and featured black suiting that had linings printed with D.C. streets and landmarks.

The white blouses boasted “long, sweeping black scarf ties that can be knotted in a variety of ways so the staff can show off a little personal flair.” The hotel donated $15,000 to Livelihood for the designs, and fundraising amounted to another $10,000.

At the time, Ashley was focused on raising more money for Livelihood, ideally $150,000. “I ran a nonprofit for so many years, and I know $50,000, in terms of economic development, within that community is not enough,” she said.

She was also thinking about her next collection, telling Givhan that a blazer could be a central part of that new collection — which would be pretty fitting given that Blazer is literally her middle name.

But a lot has changed since last summer, and there’s no telling whether Ashley’s fashion brand will find its footing in the near future, or follow the same fate of her predecessor’s.

One key difference between the two brands, however, is that Ashley's was proudly made in America.

More like this
I Tried Kendall Jenner's No-Pants Look As A Plus-Size Woman
By Sarah Chiwaya
Hailey Bieber Looks Just Like Princess Diana & I Need To Copy Her ASAP
By Sophie McEvoy
30 Of Kendall Jenner’s Best Runway Looks To Date
By Dominique Norman
Looking Back At Kylie Jenner's Best Fashion Week Looks
By Allie Fasanella
Get Even More From Bustle — Sign Up For The Newsletter
From hair trends to relationship advice, our daily newsletter has everything you need to sound like a person who’s on TikTok, even if you aren’t.