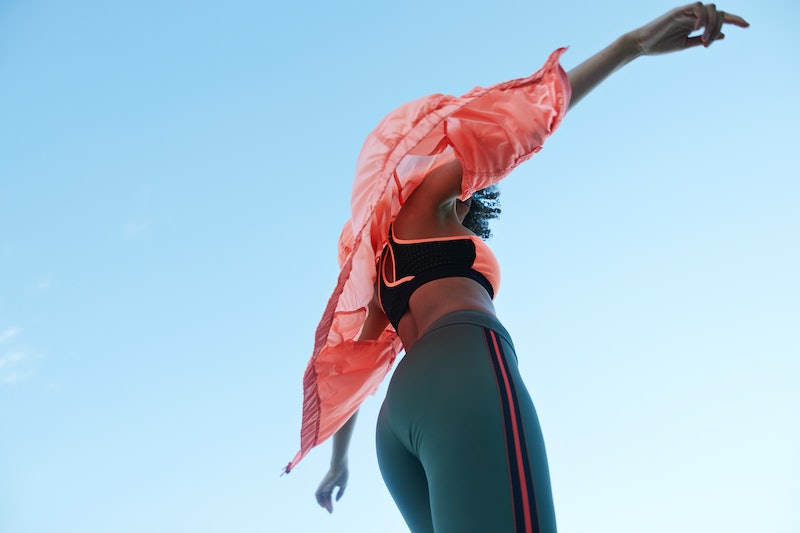 I am someone who forever will be seduced by things that promise maximum payoff with minimum effort, even when I know, deep down, that these promises usually are too good to be true. I understand logically, for example, that it takes time, effort, and sweat to sculpt rock-hard abs out of the soft area that is my stomach, and yet somehow I still found myself lying on my back in Dr. Paul Jarrod Frank’s office in NYC’s West Village, with a machine strapped to my stomach sending thousands of electromagnetic pulses deep into my core.

Said machine was the Emsculpt NEO, a new iteration of the FDA-approved Emsculpt machine that debuted in 2018. The original Emsculpt uses non-invasive high-intensity focused electromagnetic (HIFEM) technology to induce 20,000 “supramaximal muscle contractions” in 30 minutes, which the creators liken to 20,000 crunches (approximately 19,995 more than I’ll ever do in my lifetime). The biggest draw: All of this happens as you are just lying there. No huffing, no puffing — just intense electromagnetic vibrations giving you a stronger butt, abs, and/or arms.

The new Emsculpt NEO takes those same electromagnetic pulses and adds radio frequency to the mix to help reduce fat cells as it builds muscle. You don’t have to be a mathematician to understand the appeal of adding muscle while reducing fat, all while you’re lying as relaxed as a seal basking in the sun. After hearing about Emsculpt NEO, I was skeptical and slightly outraged. And then I made an appointment immediately.

How Does Emsculpt NEO Work?

Celebrity dermatologist Dr. Paul Jarrod Frank, who counts Madonna as a client, explains that your muscle temperature quickly rises by several degrees due to the radiofrequency heating in an Emsculpt NEO treatment. This prepares your muscles for exposure to stress, similar to what a warm-up activity does before any workout. “In less than four minutes, the temperature in subcutaneous fat reaches levels that cause apoptosis,” he says. (In other words, fat cells are permanently damaged and slowly removed from the body.) “Clinical studies showed on average a 30% reduction in subcutaneous fat and an average of 25% growth in muscle volume.”

If Emsculpt NEO sounds like a miracle treatment that’s too good to be true, well, you’re probably placing too much faith in it. It is not a magical cure-all that suddenly transforms your body in one sitting. Clinical trials showed that best results were actually found after four separate sessions, each spaced at least a week apart — and even then, the total fat reduction can take up to eight weeks after the final session. It’s also specifically targeted toward people who just want some additional toning. “The ideal candidates are healthy women and men with a BMI of 35 or less, who want to eliminate pockets of stubborn fat and build more muscle mass in the buttocks, stomach, legs, or upper arms,” explains Dr. Frank. (Editor’s note: The BMI ratio is viewed by some experts as an inaccurate measure of health.) As someone who uses the term “healthy lifestyle” very loosely (not drinking every night of the week and some occasional yoga counts, right?) but is very focused on toning my midsection, I thought I was a good (enough) candidate and decided to embark on my Emsculpt NEO journey.

What to Expect During Emsculpt NEO

I admit, there are very few things I commit to doing consistently once a week that don’t involve consuming food or reality television, so I wasn’t thrilled about dragging myself from the comfort of my apartment in Williamsburg to Dr. Frank’s office in West Village. Said office, however, was posh, well-decorated, and an enjoyable place to spend my time — and it turns out that the actual treatment takes just 30 minutes, so I was in and out faster than it’d take to finish an episode of RHOSLC.

When I arrived, I was led to a private room where a very kind nurse practitioner strapped the Emsculpt NEO machine on my bare stomach. Then came the pulses. It’s hard to describe exactly what they feel like — not just vibrations, but almost like someone is intensely pulsating your muscles from the inside out. The pulses would last one or two seconds, recede, and then pulse again. Every few minutes, there’d be a light tap, tap, tap from the machine, which helps break up the lactic acid that your muscles are releasing. Full disclosure: I got the original Emsculpt a few years back, and the Emsculpt NEO definitely feels more intense. The practitioner will start you at a lower power during your first treatment — around 70 to 80% capacity — and the machine should be operating at 100% by your fourth and final treatment to maximize its capabilities. (If you immediately start someone at 100% power, there’s a risk of hyper-stressing the muscles and even causing a hernia.) Due to Emsculpt NEO’s additional radiofrequency benefit, you’ll also feel a slight warming sensation as the machine works, which actually made my overall experience more pleasant.

Overall, it’s not entirely uncomfortable, but it is strange. I loved knowing, however, that the machine was working and my ab muscles were getting stronger: I was only able to get up to 90% power during my first treatment without feeling muscle strain, but by the fourth, the practitioner was able to crank up the power to 100 just a few minutes in.

Unlike other, more invasive body-sculpting treatments, there are no harmful side effects to Emsculpt NEO. The only thing to be mindful of is to avoid turning the machine to 100% power until your body feels ready for it — but that’s what the practitioner is for, and anyone who has an Emsculpt NEO machine in their office should be trained on how to safely operate it.

The Cost Of Emsculpt NEO

Emsculpt NEO is, unsurprisingly, not cheap. “Emsculpt NEO is a bit more expensive than classic Emsculpt since it uses radiofrequency,” says Dr. Frank. “The price ranges from $850-$1,100 a treatment.” Meaning: A full set of Emsculpt NEO (the recommended four treatments) could set you back up to a casual $4,400. The original Emsculpt treatment costs between $750 and $1000 a treatment.

So, did Emsculpt NEO give me the Emrata abs of my dreams? Not exactly — which is fine, because, again, that is not what the company promises (remember: not a magical cure-all). I received my Emsculpt NEO treatments in July and kept a close eye on my abdominal section in the weeks after to see if I noticed results. Although the company says to wait a few weeks after the final treatment to see the full effects, I saw the most noticeable results right after. My stomach was noticeably flatter, and I saw the hint of an ab where one previously had never existed. More importantly, I felt stronger: I was able to hold certain yoga poses a lot more easily, and planking was less torturous than usual when I did my Melissa Wood Health at-home workouts. The thing about Emsculpt NEO is that it’s really best suited for someone who already has a consistent workout routine (I currently do not) and is looking for a little extra definition in specific sections.

Think of Emsculpt NEO as a maraschino cherry. Eaten alone, it won’t do much for your palate and probably won’t feel very satisfying. But add it on top of the ice cream sundae of your consistent workout routine, and it can make all the difference.

The author received complimentary Emsculpt NEO in exchange for an honest review.