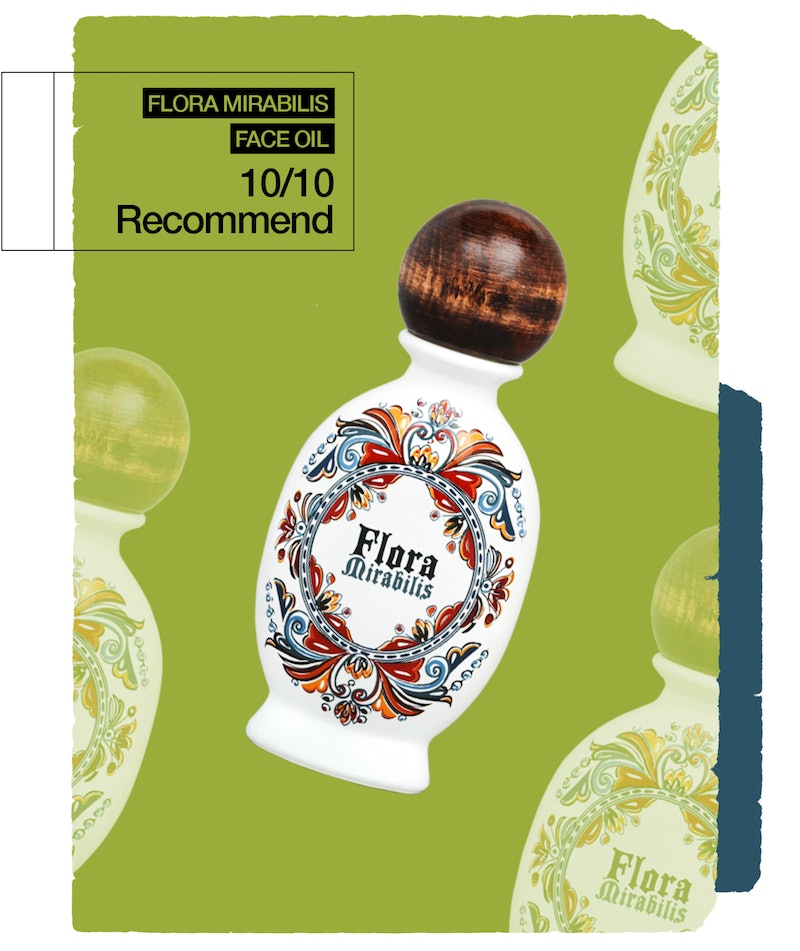 The mere thought of slathering my complexion in an oil-like film makes me shrivel up in fear, which is why I usually stay far, far away from face oils — my combination skin is prone to clogging and breaking out when anything heavy touches it. But lately, as the seasons change and the temperature dips, I’ve noticed my skin has been begging for something a little thicker. (At least that’s what I assume it’s trying to tell me through the unpleasant flaking on my chin, forehead, and cheeks.)

To quench my complexion’s thirst, I decided to try out Flora Mirabilis’ Face Oil. Admittedly, I was initially lured in by the deeply chic packaging. (The white glass bottle, what with its colorful floral design and hand-finished wooden cap, feels like an exotic potion of sorts.) But I was pleasantly surprised to learn that the formula is equally pleasurable. Made from 10 plant-based oils, the texture is velvety yet lightweight — and it smells like I just bathed in a forest. More importantly, though, it’s been a non-irritating (and non-clogging) salve for my dry, scaly skin. Read on for more about this skin-restoring elixir.

Crafted by LA-based esthetician and Flora Mirabilis founder Jordan LaFragola, the Face Oil contains a blend of natural oils from flowers, fruits, and woods. Though LaFragola has been making small batches of it for friends and family since 2016, the product only launched earlier this fall.

A trifecta of hypoallergenic and non-comedogenic fruit seed oils like sacha inchi, apricot kernel, and pomegranate seed make up the base, while vanilla and saffron are added for an antioxidant boost. Meanwhile, essential oils like sandalwood, frankincense, lavender, rose, and oud add phytonutrients — and a delicious smell — to the concoction. The formula doesn’t have artificial scents and ingredients either, making for an intoxicating, earthy scent that lingers delicately upon application.

The Face Oil is lightweight enough to use in the morning after cleansing — aka no shiny film or oily residue remains on my skin — but I like to use a few extra drops before I go to sleep at night. I even use it on my knuckles or elbows if they’re feeling particularly dry; I like to think of it as something my skin is literally drinking up.

My skin has remained blemish-free and lustrous while using it. Another benefit? It works well with my other skin care essentials, sinking nicely into my skin and providing a healthy, hydrated base for me to apply my serum, moisturizer, and, depending on the day, makeup. As an added bonus, the bottle is spill-proof — a plus for a clumsy person with a tiny bathroom.

At $120, the product is a splurge, although it’s the one face oil out of the hundreds I’ve tried that has truly left my complexion smoother, more radiant, and less splotchy and patchy. And a little goes a long way: After a couple of months of use, I still have barely made a dent in it.

Flora Mirabilis’ Face Oil is a natural-smelling godsend for the winter months. After slathering it on my complexion (and other areas of my body that are prone to dry skin), my skin has never felt more hydrated and glowy.