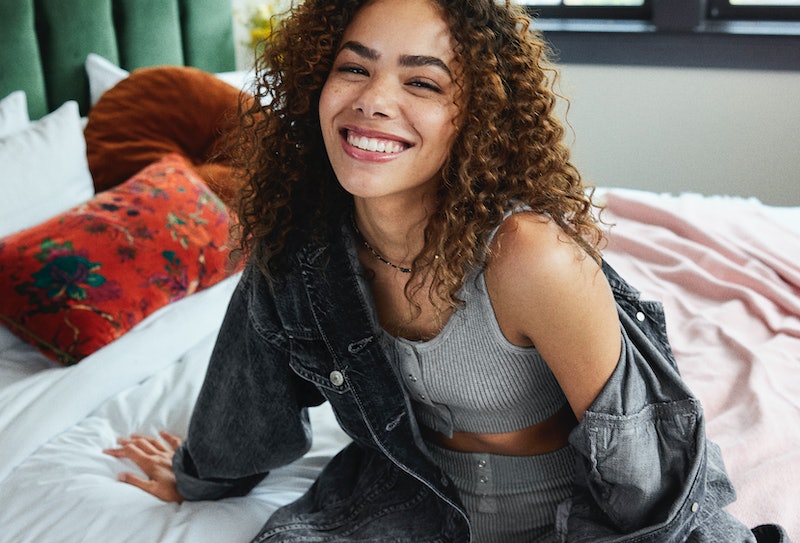 For season one, Ginny’s wardrobe had “a journey,” according to Gentry. Her fashion was intended to be an extension of her emotions.

“In the beginning, you see her covering herself up and not really wanting to be noticed,” Gentry says. “And then when she gets friends, you see her starting to change and dress more like her friends to try to fit in.”

With season two, the 23-year-old actress plans to work closely with the show’s costume designer, Bernadette Croft, to bring out “a new Ginny.”

“[She] has a new sense of confidence in herself,” Gentry says. “So, she’s not too afraid of standing out. And I think that would be really fun to play with.”

Tapping into your confidence is a theme in Gentry’s life both on and off screen. She’s one of the faces of the new #AerieREAL Voices campaign from Aerie, a brand that pledged to use only un-retouched photos in advertising, starting back in 2014.

“I have always been a fan of Aerie, even when I was in school,” she says. “What I really like is that they embrace real bodies. That makes me feel a lot more comfortable when I’m out buying clothes — to know that we all acknowledge women’s real bodies and celebrate that too.”

When she’s not relaxing in Aerie’s cozy everyday essentials — “I’m obsessed with their bralettes,” Gentry says — she loves to take a cue from Ginny and channel a casual, edgy Fall look.

Ahead, Gentry walks Bustle through the Ginny-approved trends she plans to wear (and avoid) this season.