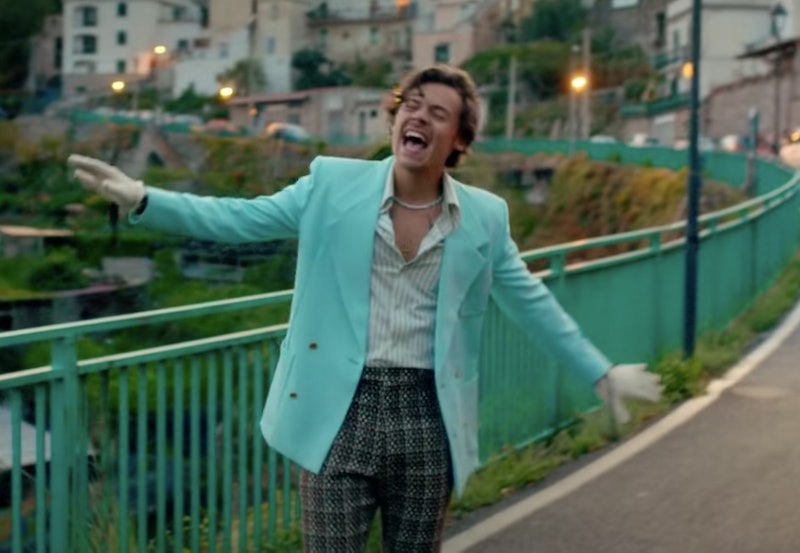 It's been a big year for Harry Styles on the fashion front. Not only is he the star of Gucci’s seven-part miniseries Ouverture of Something that Never Ended making jorts (yes, jean shorts) look cool, but the former boy bander was the first solo male to grace the cover of Vogue for the magazine's December issue, too. Now Harry Styles' has been named as the first male celebrity to top Lyst’s Power Dressers list, proving 2020 was really his year.

Lyst's annual Year in Fashion report delivers findings on trend and data to reveal how shoppers are behaving, the most wanted items, and the Power Dressers of the Year showcase the celebrities whose personal style choices drove the biggest spikes in searches, sales, news coverage and social media mentions over the last 12 months. Hot on the heels of a flamboyant and fashionable month, Styles topped the list, making him the first male celebrity to do so.

And It wasn’t just his jealousy-inducing “Watermelon Sugar” that got fashion lovers searching for hawaiian shirts. Lyst found that in the 24 hours following the release of “Golden,” page views for blue and turquoise blazers increased by 52% on their site, whilst searches for yellow bucket hats spiked 92%.

Meanwhile, during lockdown, an unlikely star was born: a JW Anderson color-blocked knit cardigan, worn by Styles during a rehearsal for a performance on The Today Show. Searches for the knitwear spiked 166% during the last week of June and the multi-coloured knitted cardigan sparked a viral #HarryStylesCardigan challenge on TikTok, whereby JW Anderson even released a knitting pattern for the cardigan so that fans could continue to create their own looks from home.

Queen B came in a close second to Mr Styles. Beyoncé choice of crescent moon print catsuit for Black Is King skyrocketed searches for the designer Marine Serre’ within 48 hours of its debut in July. Searches for the French designer spiked to 426% and 3,000 shoppers looked for “crescent moon top,” helping the French brand become the logo of the year.

More like this
Harry Styles’ Red Carpet Looks Have One Thing In Common
By El Hunt
How To Shop Your Favourite Celebrities’ Closets On Depop
By Darshita Goyal
Kaia Gerber’s Zara Collab Is This Autumn’s Minimal Chic Dream
By Darshita Goyal
Dr. Martens’ New Collab Reimagines A DM Classic
By Frances Stewart
Get The Very Best Of Bustle/UK