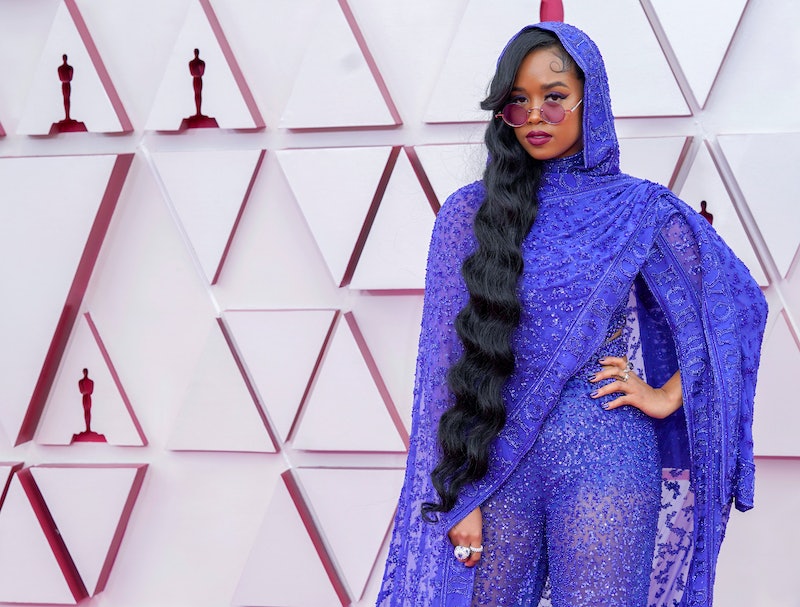 When it comes to red carpet glamour, nothing stands out quite like H.E.R.’s hair at the 2021 Oscars. The Grammy award winner is known for many things: rich vocals, stunning performances, and always bringing her own signature style. H.E.R. did the latter — and then some — at this year’s Academy Awards.

She strutted down the carpet with cascading, wavy hair draped to one side. Paired with her glittery jumpsuit (a custom cobalt blue ensemble designed by Peter Dundas), the spectacular look already has her cemented on several best-dressed lists — and rightfully so. If you look closely enough, you’ll see the embellishments on the hood of her cape are a nod to the lyrics of her song, “Fight For You.” The singer wrote the hit, which earned a nomination for Best Original Song, for the film Judas and the Black Messiah.

The look is both effortlessly cool and glamorous. The ’do sweeps over one of H.E.R.’s right eyes and flows down to her around her hip, and the other side of her face is marked by perfectly slicked edges. The singer’s winged magenta eye, matte lip, and tinted sunglasses bring the look together, making this another successful red carpet. Even if she doesn’t win Best Original Song at this year’s ceremony, her look still counts as a major win.