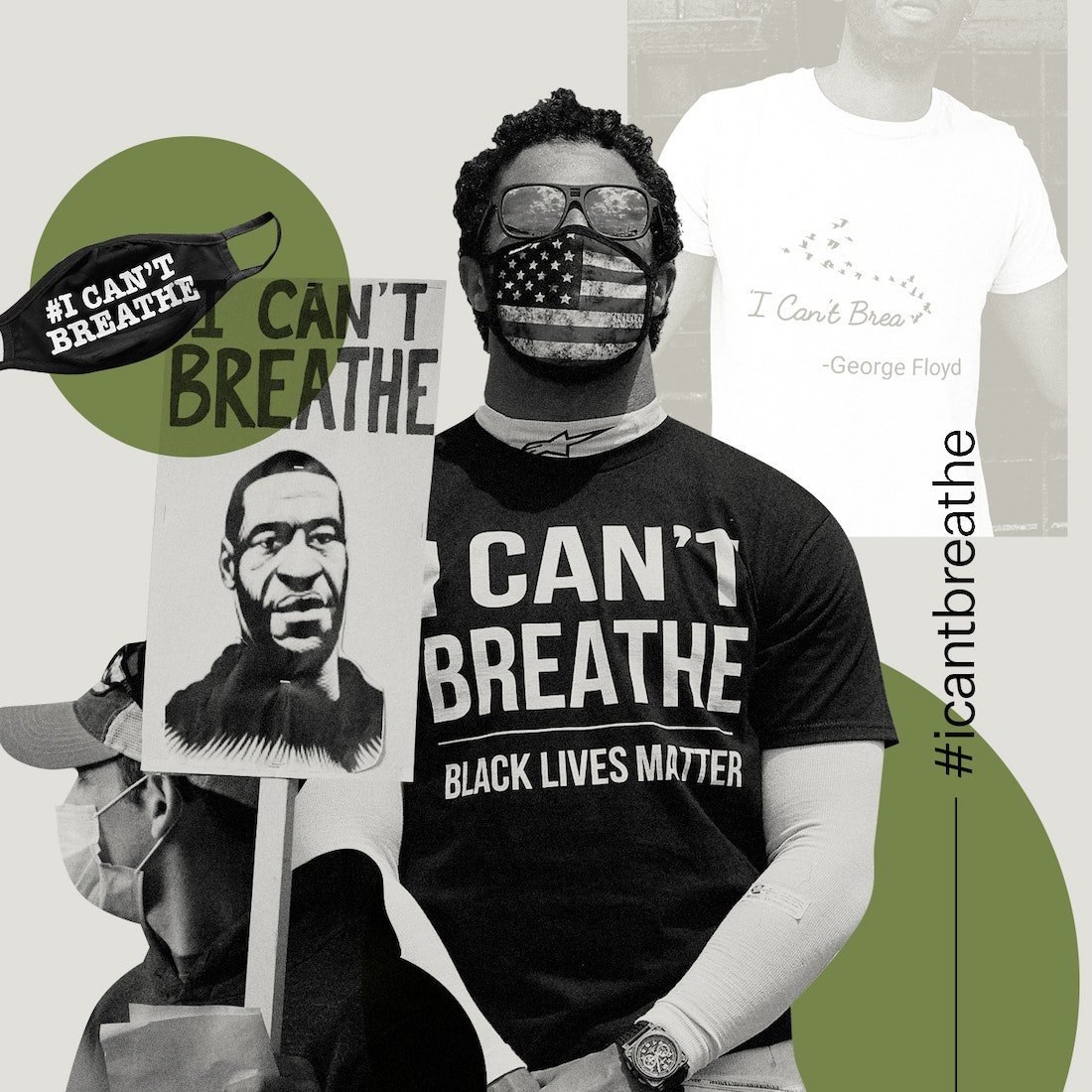 In May, a Minneapolis police officer kept his knee on George Floyd’s neck for at least eight minutes and 15 seconds until the 46-year-old father was robbed of the remainder of his life. As Floyd suffocated, he called out for his mother, who passed away two years ago. Mia Reeves Lee couldn’t shake the dying man’s last words.

“I am the mother of five by birth and eight by marriage,” the Etsy shop owner tells Bustle. “When George Floyd was murdered, it touched me deeply, as the others before him had. As a mother, his words as he lay physically oppressed broke my heart.”

Lee, who’s been selling custom shirts, tote bags, and other items on Etsy since 2012, explains that she felt compelled to create an “I can’t breathe” mask after Floyd’s death. She’s one of hundreds of sellers on the popular marketplace offering “I can’t breathe” merchandise.

“I can’t breathe” were among the last words Floyd uttered. For many Black people, the short but powerful statement — a rallying cry for the Black Lives Matter movement and the fight to end police brutality — conjures up haunting memories of the death of Eric Garner in 2014. Nearly six years later, Floyd’s killing has brought the phrase front and center once again.

[The phrase 'I can't breathe'] ... resonates because we have all felt the suffocating foot of oppression.

“The phrase to me symbolizes the suffocation of hope within the Black community,” Lee says. “We’ve heard the phrase 'the man has his foot on my neck’ in our community for years. Hearing the result — ‘I can’t breathe’ — while a man lay dying resonates because we have all felt the suffocating foot of oppression.”

The “I can’t breathe” statement morphs into a trail of birds flying away on Charity Atkins’ graphic T-shirt. The Etsy shop owner listed the item for the first time within the week immediately following Floyd’s death, and she’s donating 10 percent of the sales to Black Lives Matter.

“I wanted to create something a little different,” Atkins says. “I envisioned birds flying to heaven so I incorporated it showing the last breath in this manner. Not one, but many others’ last words was this [phrase] at the hands of police brutality, and now we are their voice.”

A quick search of “I can’t breathe” on Etsy results in more than 14,000 hits, a number that’s sure to keep growing as protests continue nationwide. Many of those sellers, however, aren’t Black themselves, although they use Black models to promote their products.

“My initial reaction is I hope they are trying to support the cause and not just gain financial support because of the tragedy,” Lee says. “Our dollars are our voice. Dollars make change. Just yesterday, I was speaking with my son who just graduated from college about investing his graduation and CARES Act money in a business that serves our community so that people would have the option to buy Black.”

Atkins has mixed emotions about non-Black people making money from “I can’t breathe” merchandise. “On one hand, they are profiting off our pain,” she says. But they’re also showing support for the message, Atkins adds.

Regardless of what non-Black sellers do, what matters most to Atkins is that the Black community shows up for its own artisans and creators. “[We should] put our money in our community and keep it there if we can,” she says. “People that know me say [the shirts are] dope — and Etsy users are favoriting it — but [they’re] not purchasing a lot.”

Izzy Spears, a creative director and body-positive advocate who’s preparing to launch “I can’t breathe” shirts for her brand Plurvy, says people have a responsibility to understand where their money is going. That’s especially true as allyship and anti-racism become “trendy” topics for businesses in the wake of police brutality protests around the world.

“As a consumer, I feel it is up to me to seek, find, and patronize places of business that are Black-owned,” Spears says. “We live in a capitalist country. I respect any business owner that runs an honest operation. For people that capitalize on the pain and suffering of others with ill intent, well, shame on them.”

Like Lee and Atkins, designing and selling “I can’t breathe” merchandise is a deeply personal endeavor for Spears — not just a money-making scheme rooted in someone else’s tragedy.

“I am a Black woman with Black men in my life who I love and care for,” Spears says. “Reading the news and watching the media heightens the fear I have for my family. Sometimes I am left feeling helpless and powerless. Making these shirts, using my talents and my platform, allows me to channel the negative energy into [something] positive.”

Black people are dehumanized simply for the color of their skin. Wearing ‘I can’t breathe’ on your chest is a reminder that I am human, I have rights, and I matter.

Three weeks ago, Plurvy began selling Black Lives Matter shirts to support the movement. The “I can’t breathe” tops, which go into production in July, are a natural extension of what Spears is trying to build with her inclusive brand.

“We felt inclined to offer ‘I can’t breathe’ shirts as a reminder [that] we have so much work to do in regard to seeing police reform and an overall better quality of life for Black people and people of color in America,” Spears says.

“Wearing the phrase is a constant reminder — Black people are dehumanized simply for the color of their skin. Wearing ‘I can’t breathe’ on your chest is a reminder that I am human, I have rights, and I matter.”