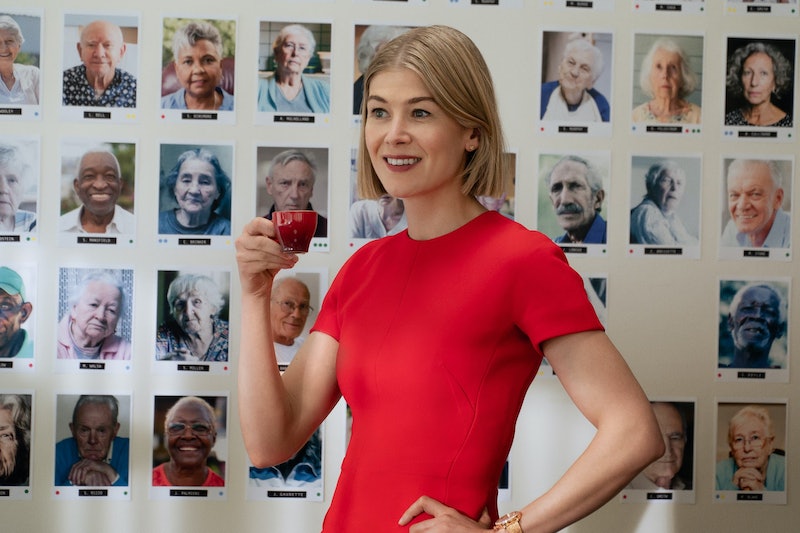 The country is abuzz about the new Netflix show I Care A Lot and Rosamund Pike’s ruthless and downright vicious character Marla Grayson. Marla made a career out of taking from the elderly or the family-less individuals who can easily be conned into handing over everything they have and being forcibly placed into an elderly home — under lock and key. It takes less than five minutes for the viewer to glean the nature of Pike’s character in the film through her actions, but the I Care A Lot outfits certainly help her along when it comes to immediate character development.

Costume Designer Deborah Newhall expertly uses color, sharp tailoring, and simple silhouettes to communicate control, boldness, and dominance. Though Marla Grayson isn’t exactly a sympathetic character, her wardrobe is one many viewers envy. She nails the art of power dressing from suiting to sheath dresses, always looking perfectly pulled together and polished (except for that one, ahem, sweatshirt moment). Even The I Care A Lot sunglasses tell their own story from her cool and collected Aviator shades to her oversize Black frames when she is under disguise.

To break down just how important the I Care A Lot wardrobe is in the making of the film, Newhall walks Bustle through every major Marla Grayson look, and one from Fran. From her tailored red sheath dress to those famous I Care A Lot sunglasses, read on for all the secrets you should know about the wardrobe. Spoilers ahead.

“The first time we see her in that courtroom, she’s wearing the signature red body con dress with a bold, shapely silhouette. I wanted a strong visual impact to establish Marla’s presence and chose that [red] dress with the opening scene in mind to show that she is in complete control of the courtroom.

Her character is bold, her wardrobe and haircut are bold. I was fortunate to be able to work directly with the Victoria Beckham line to select a lot of these pieces, and they were fit perfectly for Rosamund.

Marla knows what works on her, she knows how to call attention to herself and when not to, but it’s deliberate the way that she dresses. All heads turn when she comes into the room. The color vibrates in that courtroom. It just really pulses, and then you’re hooked. You can’t ignore red. She was completely confident in that color. No one was going to beat her.”

“Marla has the look of flowers arriving at the door on a summer morning. She is there to do a terrible thing but wears her nonthreatening work ‘disguise’ and quickly disarms Jennifer. This shade of yellow matches the volume of the red. It’s very strong.

She appears so cheerful that Jennifer goes along and is tricked right out the door. Her life as she knew it is over in a moment. There’s a beautiful line to every piece. Marla’s got a uniform.”

“Fran as Marla’s partner does the research and paperwork, getting things done behind the scenes. Fran is in the background. I wanted her to be the doer, the fixer that gets stuff done. She’s sleek, but she doesn’t stand out.

Going down the streets, she’s not turning heads like Marla. I wanted her look to be practical, softer than Marla’s business look but with colorful elements that connect her to Marla. There are little pops your eye is pulled to, but she was a bail bondsman in her previous life. She had to be physically ready to run.”

“I specifically chose the pale yellow suit starting with the night water scene in mind. Marla had to do a lot of work in that suit, from day to late night. There was a lot of action. She’s got to go through a window, and you had to be able to see her face, arms, and legs.

She rose out of that dark hole and that’s the beginning of her rebirth. She won the toughest test she’s ever had to go through and has enough to get herself through this moment.

The color also worked very well in the earlier scene with Roman when she has been kidnapped and then again, arriving soaking wet at the convenience store – a favorite scene. We needed to have multiples and be certain the clothing would be safe for the stunt work in the quarry.”

“The T-shirt and sweatshirt display was in the script, having her change out of her wet clothes and get into whatever was available. I love the scene in the convenience store. Her actions and the red tourist sweatshirt added a chuckle and a double take of her wearing a slightly absurd, very non-Marla sweatshirt.

There were many strong color elements placed in that scene which all seem to pop and vibrate. The red sweatshirt added to the fun.”

“I wanted a very un-Marla look for her bold excursion into Roman’s building. The wig was established working with the hair/makeup department and the bold sunglasses offered a fun twist for her disguise, a fun villain look.

We don’t know what she’s about to do so it’s kind of a mysterious moment. It goes wild and off the rails again when she goes to Roman.”

“Finding the white Victoria Beckham dress in her size at a resale shop was a fantastic find and Rosamund loved it.

I chose it for the hospital scene with Roman as a visual counterpoint to her most sinister conquest. And those amazing black, white and yellow Jimmy Choo heels — a favorite moment.”

“I always wanted her in all white for that [final] scene. She is now an admired business figure, has achieved the wealth she desired and at this point she no longer does any of the day-to-day dirty work. Marla is on top of the world, as if there is a purity to her. I had been moving her to less or no color toward the end of the story, so the final brilliant white is a successful end cap to the story.

Marla’s final look [was my favorite]: the white suit with the diamond earrings. We know she appreciates and loves diamonds, and it’s a callback to the diamonds from earlier in the movie. There’s an ascension for her where she just keeps soaring higher and higher until she’s a billionaire.

She’s so above the common person on the street and her clients – they’re elements of income and not people. She looks clean and admired, she’s not even getting her hands dirty anymore because she’s got this empire."