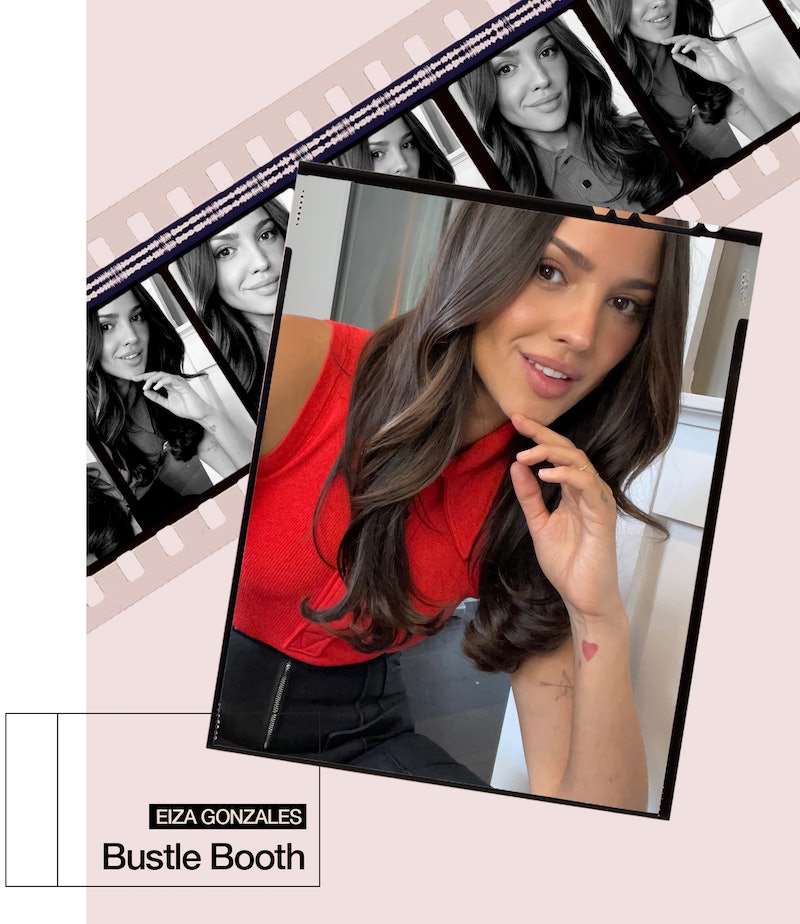 Eiza González is aware she has a type. From the sharp-tongued Darling in Baby Driver, to a cyborg assassin in Alita: Battle Angel, to the fearsome Madam M in Hobbes & Shaw, the Mexican actor has been known to kick ass on screen. But if her latest film I Care A Lot is any indication, playing the femme fatale is not even close to González's full range.

After beginning her career as a teen on telenovelas in her native Mexico City and performing in back-to-back action movies, the 31-year-old González is now looking to play the kinds of roles that she wants to see on screen. “We live in a society where — especially for a Latin woman — I feel like [people] have a predisposed idea of what I should be, or what I should be playing,” González tells Bustle. “[Millennials] grew up on these movies that were like, 'You have to be cool, popular, and hot [to] make it.' But that’s not necessarily the best for the female mentality.”

When González came across the script for I Care A Lot, she jumped at the opportunity to play a multidimensional version of her usual action heroine "type." The Netflix film follows a legal guardian, Marla (played with icy serenity by Rosamund Pike), who uses shady means to control her clients’ wealth; González's Fran is both Marla's romantic and business partner. It's González's grounded performance that brings humanity to both the scheme and the film as a whole, as the plot's escalating stakes teeter close to taking the movie fully off the rails.

The actor was careful to fine tune her performance, seeing the role as a “good step forward” to playing more versatile types in the future. “I’m so grateful for the opportunities I’ve had and you’ve got to accept as an actress that these [femme fatales] are the roles that people see me in,” González says. “But I was just excited to kind of rip that apart.” It's the strength of Fran and Marla's relationship that helps González do just that. While Marla is a maniacal, power-hungry businesswoman, Fran is her center. A former bail bond agent and someone who prefers to pull the strings behind the scenes, Fran is always there to let Marla know when she's gone too far. She's also always there to champion Marla even when the odds are stacked against her. In an often overtly straight and cisgender genre, it's a joy to see two queer women who truly love and support one another break bad.

"This role felt like a perfect foot forward for that narrative of, 'Yeah I’m kickass and I have this sort of look that you guys think of [in action movies]. But how about this [more nuanced version]?" she says. "I hope this is the beginning of more grounded roles that allow for a deeper performance."

Get to know more about González — including her love of Samurai Pizza Cats — in her Bustle Booth questionnaire below.

My favorite overused line is, “Omg Danny DeVito?! I love your work!”

I am currently obsessed with interior design shows like Dream Home Makeover. I have rewatched it a million times. And I May Destroy You.

I’m about to say something controversial, but I’ve never watched reality TV. Maybe the only time I did was The Real World: Las Vegas when I was about twelve. I know it is disappointing, but I just don’t get it.

"Part of Your World" from The Little Mermaid

I love watching films, reading about healthy living approaches, and working out. I like to set myself certain short term goals that keep me inspired. Learning new languages. Just learning new things.

That I’m unbearable. Kidding. That I’m a good friend. I love to care about my loved ones (sometimes to a fault), but my priority is always my people.

More like this
Lindsay Lohan & Jonathan Bennett Celebrated Mean Girls Day Very Differently
By Jake Viswanath
What’s New On Netflix: Ana De Armas’ 'Blonde' & A Nick Kroll Special
By Arya Roshanian
Here’s Everything Coming To & Leaving Netflix In October
By Jake Viswanath
Everything To Know About The Long-Awaited ‘Community’ Movie
By Stephanie Topacio Long
Get Even More From Bustle — Sign Up For The Newsletter