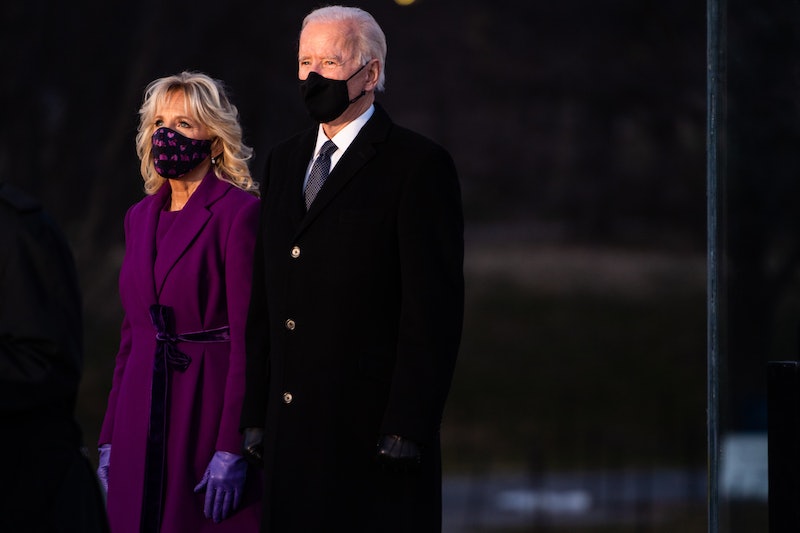 A new era of fashion in the nation’s capital is underway. As the inauguration of Joe Biden approaches, the sartorial spotlight is shifting to different political figures: soon-to-be First Lady Jill Biden and Vice President Kamala Harris. And judging by Jill Biden's Covid-19 memorial outfit, fans have a lot to look forward to.

On Tuesday, the women arrived at the National Mall for a memorial honoring the more than 400,000 Americans who have lost their lives to the coronavirus pandemic. It was the first national memorial of its kind since the pandemic began as the Trump administration never organized one. The moment was undoubtedly somber, and Biden and Harris chose ensembles that communicated a myriad of messages.

Dr. Biden, for one, opted for a head-to-toe purple look. Purple is one of the Suffragettes’ colors, so it was fitting that she wore a purple wrap coat and dress from Jonathan Cohen’s fall 2021 collection. What’s more, red and blue mixed together creates purple, which could be a signifier of unity and bringing the country together (it also happens to be the same hue that Hillary Clinton wore while delivering her concession speech in 2016).

Cohen is a Mexican-American designer, which makes Biden’s choice particularly telling. Trump famously kicked off his presidential campaign in 2015 by suggesting that Mexico is “not sending their best” to the United States and promising that he’d build a border wall that Mexico would pay for (this never happened, by the way). Cohen is also a proponent of a sustainable approach to fashion. According to Vogue, the coat and mask were produced using fabric scraps from Cohen’s studio.

“It is a true honor to have Dr. Biden wear Jonathan Cohen as the first family arrives in Washington D.C.,” Cohen said on Instagram. “I am beyond humbled to play a small part in this future administration.”

Harris was also intentional with her wardrobe selections. She wore a camel overcoat by Pyer Moss that featured elegant pleating on the back. The label’s founder and designer, Kerby Jean-Raymond, has helped usher in a new generation of Black designers and has been purposeful about using his platform to showcase diversity in fashion and to engage with social justice issues. Last year, he collected PPE for hospital workers and provided $50,000 in grants for COVID-impacted small businesses.

The incoming VP topped off her look with a pair of calf-length black leather boots by Manolo Blahnik and a matching black mask.