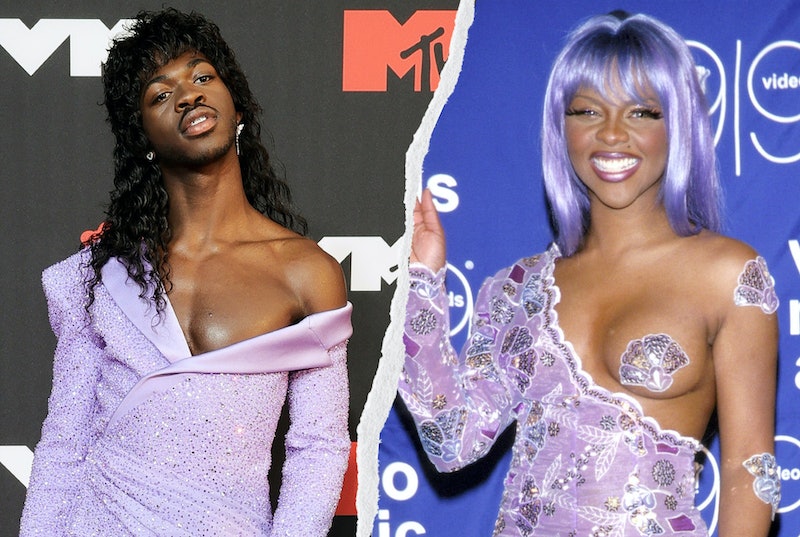 As expected, Lil Nas X showed up to the 2021 Video Music Awards red carpet ready to turn heads, for better or worse. And accomplish that he most certainly did, entering the VMAs in a bold lilac moment that many are theorizing might be a secret tribute to rapper Lil’ Kim.

Lil Nas X’s walked the red carpet in a lilac pant and bedazzled off-the-shoulder blazer-like top, complete with long matching train. He finished off the look with matching nails, simple diamond jewelry, and a long, curvy black wig. It was, without a doubt, a good representation of Lil Nas X’s style evolution.

Many fans took to Twitter to point out that Lil Nas X’s outfit bore a resemblance to Lil’ Kim’s iconic purple jumpsuit from 1999, which featured an exposed breast covered by a matching seashell-shaped pastie. The look was a moment more than two decades ago, and Lil Nas X appeared to be honoring it with his outfit this evening.

Not all fans agreed, with others believing the look more strongly resembled Prince or Rick James. It’s clear, however, that Lil Nas drew inspiration from legends of the past, and we love to see that.

To the surprise of many, however, Lil Nas X did not show up to the VMAs with his iconic baby bump, a promotional tool he’s been flaunting this past week in anticipation of his upcoming album release. While it would have been iconic for him to walk the red carpet pregnant and thriving, the look was still a fitted, tailored moment, and supremely achieved.