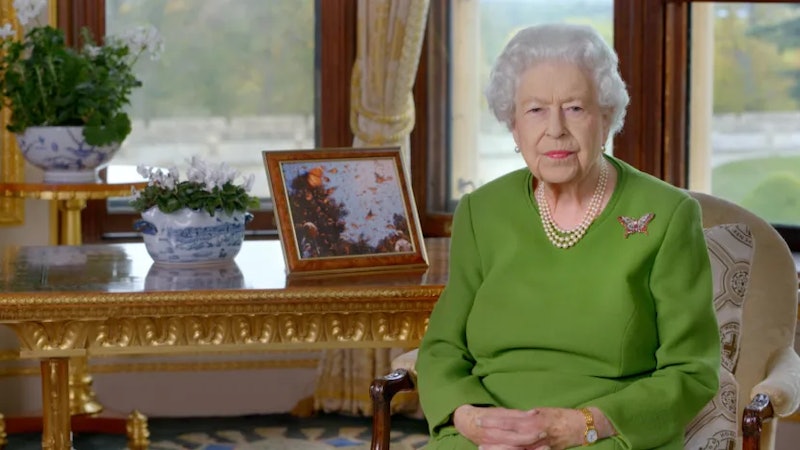 While not able to attend the 26th United Nations Climate Change Conference in Glasgow in person, Queen Elizabeth still made an impact nonetheless. Speaking at the COP26 Climate summit via video, she urged world leaders that the "time for words has now moved to the time for action.”

The 95-year-old monarch also took the opportunity to deliver a personal message about Prince Philip to the delegates, and spoke of her “great pride” in her “dear late husband’s role in encouraging people to protect our fragile planet.” Echoing her sentimental message, the Queen’s COP26 speech outfit also paid tribute to Prince Philip, who passed away earlier this year.

In the pre-recorded video filmed at Windsor, the Queen is wearing a vibrant green dress – no doubt a nod to the event’s environmental theme. However, it was the Queen’s diamond and ruby butterfly brooch that caught royal-watcher’s eye. Per Tatler, the butterfly brooch was gifted to the then-Princess Elizabeth by the Dowager Countess of Onslow as a wedding gift in 1947.

It's a lovely combination of Rubies and Diamonds,” says jewellers 77 Diamonds, via The Express, who added: “Given the purpose of the summit, the brooch and pearls are purposely understated, and perhaps the brooch is also a nod to Prince Philip's longstanding commitment to the environment."

Alongside the brooch, the queen had a framed photograph of the late Prince Philip, surrounded by Monarch butterflies in Mexico, circa 1988. (Duke of Edinburgh visited the winter habitat of the then-under threat butterfly in Sierra Chincua, Mexico.)

Per the BBC, The Queen had been scheduled to attend the COP26 event in Glasgow, however, was advised to rest following medical checks. Prince Charles, Prince William, and the Duchess of Cambridge are in attendance, however.

In the Queen’s address, the royal also said: "It is a source of great pride to me that the leading role my husband played in encouraging people to protect our fragile planet, lives on through the work of our eldest son, Charles, and his eldest son William. I could not be more proud of them."