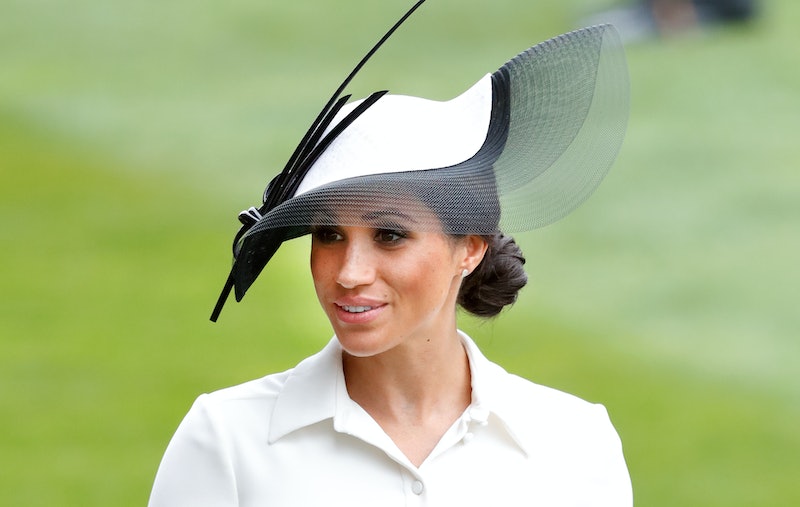 Stop the presses: Meghan Markle and Prince Harry will sit down for an exclusive tell-all interview with Oprah Winfrey next Sunday, and the first preview for the highly anticipated event just dropped. And in it, you get a glimpse at Meghan Markle's Oprah interview outfit, which is noteworthy all on its own.

In the 30-second trailer, Markle is seen wearing a belted Giorgio Armani gown with her hair pulled back in a low bun. The elegant dress retails for $4,700 and in true Markle Sparkle fashon, it's already sold out online. It features a deep V neckline and white foliage embroidery placed along the right shoulder and chest. The midi length that sweeps along the ankles makes it the perfect silhouette for spring.

On the accessory front, she opted for a silver necklace by ethical jewelry designer Pippa Small and classic black heels by Aquazzura. According to the blog Meghan's Mirror, she also wore what is believed to be one of Princess Diana's Cartier bangles.

It's telling that Markle wore a black dress with lotus flower detail. The lotus flower signifies resurrection, revival, and a will to persevere, according to Town & Country. "The lotus flower's daily resurrection is certainly interesting, and surely symbolic of revival. But the flower also has a fascinating will to live. A lotus seed can withstand thousands of years without water, able to germinate over two centuries later."

During the preview for the Oprah interview, Markle is seen sitting outside with her husband, cradling her baby bump. She's expected to share just how tough it was navigating royal life and why she and Prince Harry decided to step down as senior members of the British royal family.

CBS will air Winfrey's candid interview with the couple on March 7.