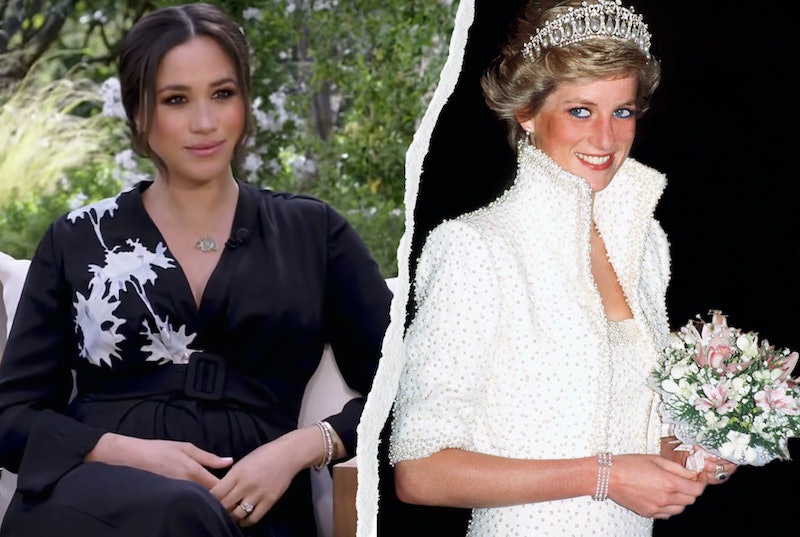 Princess Diana’s jewelry collection is among the most iconic in the world. Some has been returned to the Royal archives and other items not seen since her passing in 1997, but there are several iconic pieces deep in the vaults belonging to her two sons. Many of those jewels have been inherited by her two daughters-in-law, Kate Middleton and Meghan Markle. And most recently, Meghan Markle's Oprah Interview outfit included Princess Diana's bracelet.

Of course, you are likely familiar with her sapphire and diamond engagement ring that now sits on Markle’s finger or the aquamarine ring that currently belongs to Markle. But, it seems, Meghan Markle has also been gifted another piece from the Lady Di collection: a pearl and diamond bracelet. The now re-designed bracelet was spotted on Markle’s wrist during a preview of her Oprah interview, set to debut next week.

When the bracelet was part of Princess Diana’s collection, it featured three pearl strands that were connected by diamond-studded stations. And though Markle’s engagement ring was a custom creation for her (the center stone sourced in Botswana), two diamonds in the setting were pulled from this very bracelet. It seems that, in doing so, the bracelet was re-fashioned into separate chains, like the one that was seen most recently on Markle.

And the reason Markle chose to wear the bracelet is all the more heartwarming. According to People, she picked jewelry from Princess Diana's archive "so Diana could be with them" during the interview.

Though Markle has not made an official statement about the bracelet, it’s clear that they wanted the late princess to be a part of their first official interview in some way after their Royal exit, one that Princess Diana made herself back in 1996. And that connection — through jewelry, lineage, and legacy — is truly powerful to witness.

More like this
Meghan Markle’s Outfit Paid Tribute To The Queen In More Than One Way
By Shahed Ezaydi
Princess Charlotte’s Outfit Paid Tribute To Her Beloved “Gan Gan”
By El Hunt
Bella Hadid's Flare Jeans Under A Dress Outfit Is So Nostalgic
By Allie Fasanella
These Are Kylie Jenner's Best Paris Fashion Week Looks... So Far
By Dominique Norman
Get Even More From Bustle — Sign Up For The Newsletter