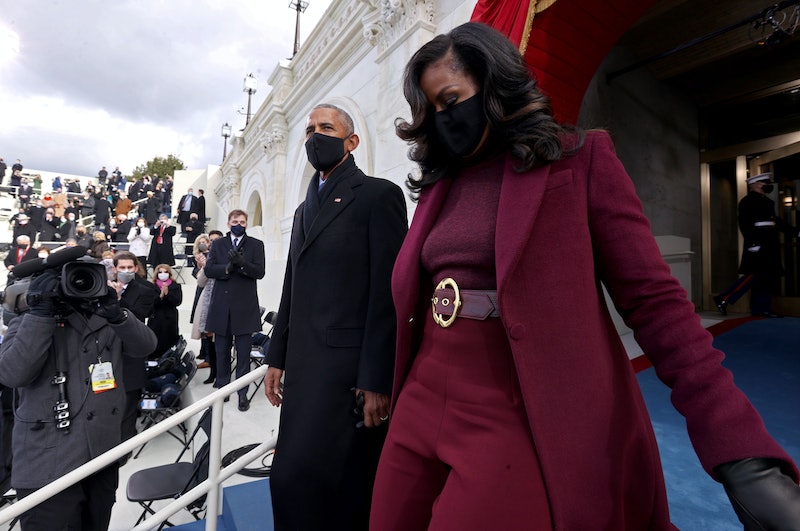 From the moment she arrived at the Capitol, Twitter took note of Michelle Obama’s inauguration outfit. The hair! The wide-leg pants! The belt! Yes, the internet agreed, it's time to get emotional. However, it's the outfit's similarity to another one of her inauguration looks that has Twitter's collective mouth agape.

As NYU Law professor Melissa Murray pointed out in a tweet, Wednesday's outfit was like a revamped version of Michelle Obama's 2017 inauguration look — a burgundy coat and A-line dress by Jason Wu. Both outfits are a similar color. Both make use of a collared coat. But, the vibe of the two could not be more different.

The 2021 plum inauguration outfit is a look that says, "I'm here and you're welcome." It says, "Take several seats. Or, better yet, just lay on the floor." As Murray noted, it is the “how it started/how it's going” meme embodied.

You may have missed the “how it started” meme that took over last year if you've somehow spent your quarantine days somewhere other than the internet. Some have used the meme to show the journey of a relationship. Some have used it to show the DM that changed the course of their lives. Some still are Guy Fieri. Now, it is Michelle Obama's meme and we are all but borrowers of the form.

Like an awards show for democracy, inauguration looks are always much-anticipated. Michelle Obama’s iconic 2021 outfit is from designer Sergio Hudson, a Black designer from South Carolina. Kamala Harris' deep blue inauguration outfit was also designed in part by Hudson. Jill Biden, too, wore a blue outfit, though hers had "Elsa but make it White House" energy. And try as he might, Bernie Sanders' inauguration look has not gone unnoticed. He's serving comfort! He's serving warmth! He's serving "Grandad at your outdoor hockey game."

Perhaps it seems silly to become so all-consumed by a single outfit on a day that is momentous for far bigger reason. But after the uncertainty, unrest, and unabashed white supremacy the last four years have brought us — as well as the long-overdue cultural reckoning that's yet to find any resolve — it's nice to know we can rely on some things. Namely, Michelle Obama's White House wardrobe, her devotion to drip or drown, and her commitment to clothes that leave us in tears.

More like this
Kate Middleton's Tribute To The Queen Also Had A Connection To Princess Diana
By Sam Ramsden
Bella Hadid's Flare Jeans Under A Dress Outfit Is So Nostalgic
By Allie Fasanella
Princess Charlotte’s Outfit Paid Tribute To Her Beloved “Gan Gan”
By El Hunt
These Are Kylie Jenner's Best Paris Fashion Week Looks... So Far
By Dominique Norman
Get Even More From Bustle — Sign Up For The Newsletter