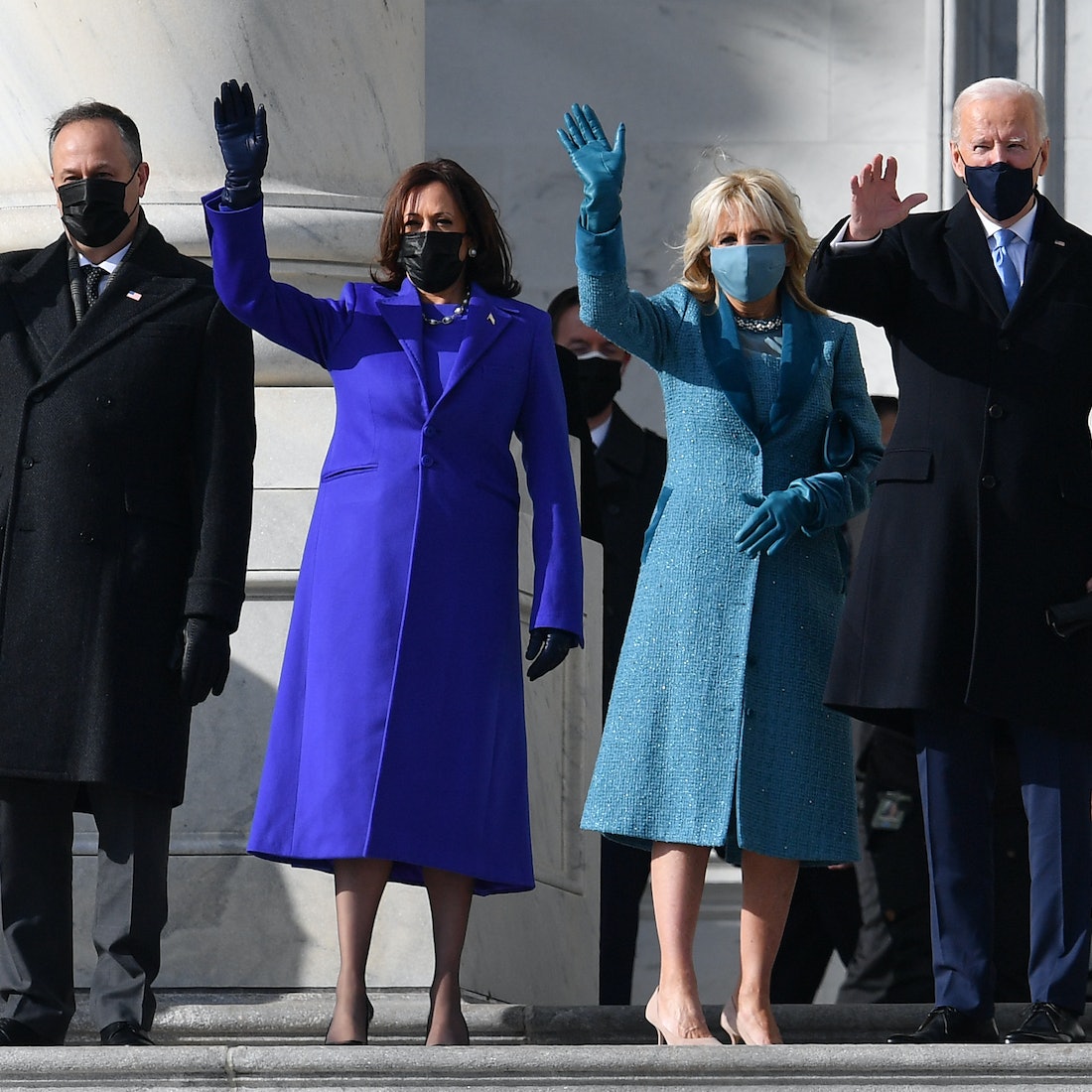 With the inauguration of President Joe Biden and Vice President Kamala Harris, American politics enters a new era, one defined by compassion and civility. There will be changes in policy, of course, but we can also expect a new approach to style. Kamala Harris and Jill Biden’s inauguration outfits are the first sign of this sartorial shift, with both remaining true to their personal style, while elevating it for a global stage.

Kamala Harris opted for a purple coat and dress created by Christopher John Rogers. A Black American artist, Rogers hails from Baton Rouge, Louisiana. As the color of the suffragette movement, purple is a significant choice, one that brings with it associations of royalty, power, wisdom, ambition, and loyalty. It's a tribute to Shirley Chisholm, the first African-American woman in America to run for president.

Jill Biden chose a custom blue dress and overcoat created by emerging American designer Alexandra O’Neill for Markarian. The embellished teal coat features a velvet collar and cuffs, while the dress itself boasts a full silhouette and a scalloped skirt. “The color blue was chosen for the pieces to signify trust, confidence, and stability,” the brand said in a statement. Blue also has a soothing visual effect, symbolizing serenity and calm, and invoking rest.

While Biden’s look sought to soothe, Harris’ suggests that she is ready to get to business. In the face of countless lives lost and upended by the coronavirus pandemic, soaring unemployment rates, and a violent insurrection acted out by white supremacists, both messages are necessary.

Harris’ power dressing is a familiar route for the former Senator. Just like the dark, structured suits worn in her legal career, Harris’ understated looks and sharp tailoring speaks to a somber conviction to duty, though now the pieces are more elevated and the designers thoughtfully selected.

At the Lincoln Memorial on Tuesday, where the incoming administration gathered to honor the 400,000 Americans who have died of Covid-19, Harris layered a camel coat from Pyer Moss over an all-black ensemble. The Black-owned brand, founded by Kerby Jean-Raymond, is a force for change in the fashion industry and the country, supporting small businesses, distributing PPE to healthcare workers, and fighting to end police brutality. She likewise chose an American designer on election certification night, stepping out in a Carolina Herrera white suit, the color a nod to suffragettes who fought to give women the right to vote.

By contrast — or perhaps, complement — Jill Biden dresses for joy. She gravitates toward color and embraces design flourishes, like the Swarovski crystals on her Inauguration look or the bow detail on the Jonathan Cohen purple coat she wore to the Lincoln Memorial on Tuesday. She wears gloves in every color of the rainbow, along with matching face masks, suggesting that for all the turmoil the country’s endured, there’s still a reason to hold onto hope.

This is a sharp contrast to the austere, structured pieces worn by her predecessor, Melania Trump, who left the White House Wednesday morning wearing an all-black Dolce & Gabbana dress. By contrast, Biden’s choices have heralded a return to tradition, with the incoming First Lady having already opted for an Oscar de la Renta dress embroidered with pink, yellow, and orange flowers for Election Night. On her feet she wore pink pumps embellished with a large bow. Both flourishes were intentional, invoking the long-held tradition of First Ladies wearing Oscar de la Renta which stems back to Jackie Kennedy Onassis.

In making intentional sartorial choices, both Harris and Biden will follow in the footsteps of former First Lady Michelle Obama, who used clothing to create an air of accessibility and to communicate with the American people. Like Obama, they will use their spotlight to boost American designers, signal support to causes they care about, and send messages to the American public. For their first outing, the message was one of peace and hope, with a subtle reminder: there is still much work to be done. And they both dressed the part.