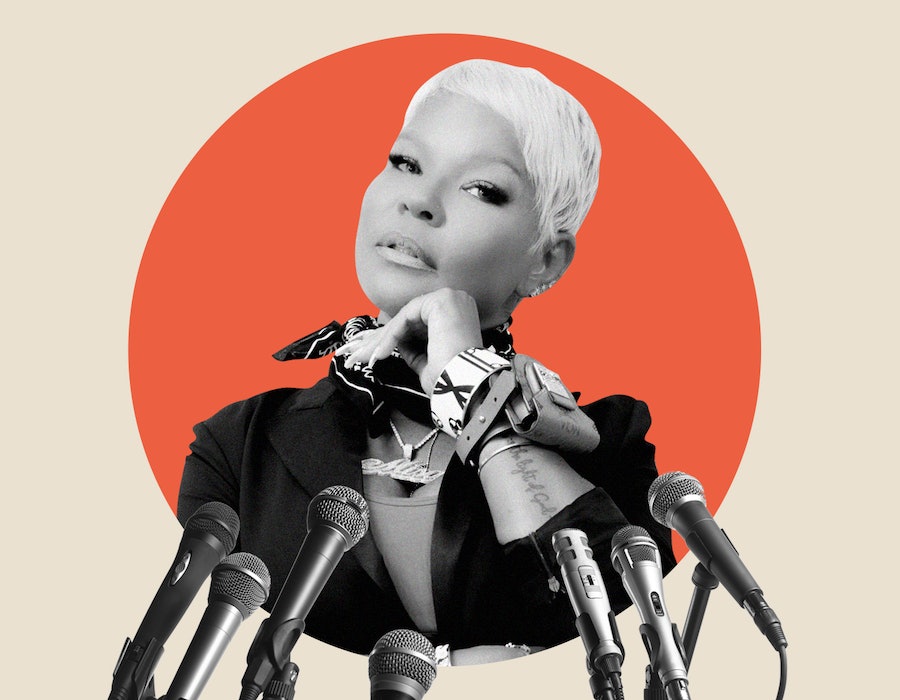 In Bustle’s Quick Question, we ask women leaders all about advice — from the best guidance they’ve ever gotten, to what they’re still figuring out. Here, Misa Hylton, an image architect and fashion designer, tells Bustle about her new documentary, her thoughts on “WAP,” and advice that serves her well in her career and life.

As '90s fashion makes a major comeback, in every arena from pop culture to retail, the style icons of that decade are finally getting their due. At the top of that list, you'll find Misa Hylton, the image architect behind Lil' Kim and Mary J. Blige's iconic style, which we've recently seen reinterpreted in Cardi B & Megan Thee Stallion's "WAP" music video.

“I’m a hip hop girl to the core, so seeing them take the torch, keep it going, and reimagining the fashion and art looks that I’ve created, it feels really good,” Hylton tells Bustle of the referential clip. “I think it’s dope. I love the both of them. Kollin Carter, who is Cardi’s stylist, and EJ King, who is Megan’s stylist, they’re both amazing as well.”

Hylton — who’s worked with everybody from the aforementioned Mary J. Blige to Missy Elliott — is featured in The Remix: Hip Hop X Fashion, a new Netflix documentary that explores her cultural impact. When the filmmakers asked Hylton to be one of the documentary’s main subjects, alongside streetwear designer April Walker, she was taken back at first.

“It made me emotional, and I usually don’t get emotional,” Hylton shares. “After almost three decades in this business, to be able to tell my story and get a film that was not only educating the world, but also empowering women in hip hop and in fashion — I was really so filled with gratitude.”

Ahead, Hylton reflects on her prolific career and reveals some of the expert advice that have helped her get to where she is today.

What was some of the smartest and most helpful advice you received when you were starting out?

MH: It wasn’t really direct advice, but being in the presence of Andre Harrell and Puffy, they were a great balance by what they modeled and their natural behavior. Puffy knows how to put a battery in your pack. He’s a go-getter. He believes everything is possible. He gets the work done. He does what he has to do to achieve success. He sets the standard high. And Andre had this energy that was very nurturing, understanding, and empowering. So, it was what they modeled for me, those two.

Did you make any mistakes early on in your career that stand out now looking back?

MH: Oh yeah, a million. I like to call them learning experiences, right? Because you don’t know what you don’t know. Me being so young in this business, there were things I didn’t know about the technical aspects of television and styling early on. Some days I look back, and I’m like, "Oh my god, that was a photo shoot look. That was not a performance look.” I always learned how to set boundaries, especially with being so young and achieving success so quickly, becoming popular, and making a ton of money. I mean, I made $1 million before I was 25 as a fashion stylist.

What was it like making that kind of money at that age? What was the learning curve with your finances?

MH: I got thrusted into this position that I wasn’t educated around or familiar with. Everything moved so quickly. Everything I did was also done using my best common sense at that time. The learning curve was great. I had to learn about taxes and managing a company. I became an entrepreneur very quickly. There was a lot to learn. Financial strategy was not my forte. But, in hindsight, it was my responsibility to have the right people around, and I did. I had people who helped me structure things.

How can Black women and women of color, especially, break into fashion?

MH: You gotta believe in yourself. You don’t need to be intimidated about anything. You just need to become knowledgeable about what to do. Have faith. Get passionate. If you’re really passionate, the intimidation doesn’t stand a chance. There’s nothing that can keep you separate from what you’re passionate about. Everything won’t be perfect, but it’ll be worth it. You just gotta be ready to get in it and get off the sidelines. Never let fear hold you back.

What moment stands out to you when you remember thinking, “I’ve made it”?

MH: Oh, I can tell you! It was when I started working with Lil’ Kim. When I stepped out from the Uptown Records nest, and I started to work with other artists such as Lil’ Kim, Montell Jordan, and Dru Hill. The list goes on and on at that time. I was like, “Wow, this is a career.”

How do you deal with negative energy? When the vibes are off, what do you do?

MH: I don’t give it energy. Once you engage with negative energy, you become part of it. You get connected with it. I’m able to look at it, observe what it is, and protect my own energy by my thoughts. It’s really very simple. Because negative energy is always a set-up.

You can feel it: It’s yucky, murky, heavy. Sometimes it’s hard because you’re like, “Oh wow, I already engaged with it. I gotta get out of it.” But I’m very self aware. That doesn’t mean negative things don’t make me feel bad, or that I don’t argue with people. But I know how to get myself out of it quickly. That’s my power. That’s what I can do. And I don’t care what’s happening around you, you still have that power to have joy, love, and peace for yourself. Period.