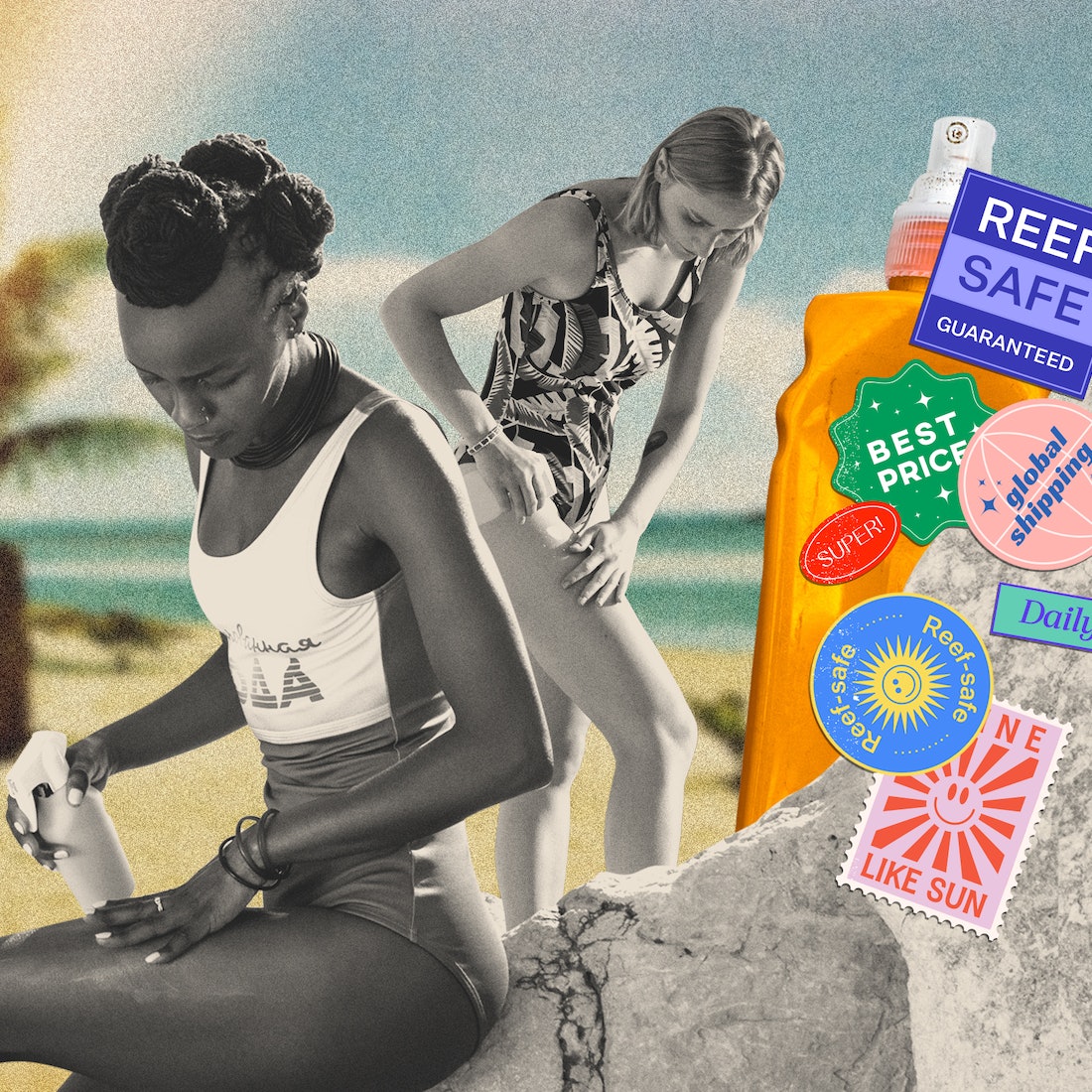 Each morning on her daily walk, Gay Timmons passes a sign that taunts her. Perched before the entrance of each beach on Maui where she’s been visiting, she’s greeted by a stern warning: “Reef-Safe Sunscreen Only.” Nicknamed the “Godmother of beauty ingredients,” Timmons is a veteran beauty industry insider and founder of ingredient supply chain Oh, Oh Organic, so she knows exactly why the controversy around this particular sign is just beginning: It’s looking more and more like there’s no such thing.

A law restricting two common sunscreen ingredients (oxybenzone and octinoxate) passed in Hawaii in 2018, and signs like this remind beachgoers not to use them in the water due to potential damage to marine life. They’re bad for the ocean, so what’s the problem? Laws like this have inadvertently inspired beauty brands to use “reef-safe” as the latest marketing ploy when in reality, a growing body of research is showing we’ve demonized two sunscreen ingredients when, as Timmons puts it, “they all have problems.”

The beauty industry is good at being controversial, but the idea that people have been accidentally polluting the ocean with “reef-safe” sunscreen is enough to make anyone’s head spin, especially after sunscreen’s already had a rough few years, thanks to product recalls due to chemical contamination (which really needs context to be understood) and dizzying studies that show some sunscreens seep into the blood (the danger of which is still unclear). But with consistently high skin cancer rates being reported year after year, going without protection isn’t the solution.

To help navigate the confusing world of sunscreen right now — beyond alarmist headlines and misleading marketing — we asked industry insiders for the truth on the most timely and commonly-asked sunscreen questions.

Though there are differing opinions on many aspects of suncare, all experts agree that finding a sunscreen you like (then wearing and reapplying every day, but more on that ahead) is crucial for healthy, beautiful skin, no matter your skin tone — and the reasons why go far beyond disease. “Of course sunscreen provides protection against harmful UV rays that cause precancers and skin cancers, but it also plays a vital role in other conditions as well,” says board-certified dermatologist Dr. Corey L. Hartman, M.D., FAAD. “Melasma, rosacea and polymorphous light eruption [skin rashes] are just a few dermatologic conditions that are exacerbated by exposure to ultraviolet light.” What’s more, the sun breaks down collagen and elastin in our skin, which leads to dullness and wrinkles, the doctor notes.

Adds Charlotte Palermino, licensed esthetician and co-founder and CEO of Dieux Skin, “Just wearing a sunscreen is the bare minimum that you can be doing in your skincare routine,” she says. “If you're spending a lot of money on skincare and you're not wearing sunscreen? It's perplexing.”

Skin cancer is the most common cancer in the United States and worldwide — one in five Americans will develop skin cancer by the time they’re 70 and having five or more sunburns doubles your risk for melanoma (the deadliest type), reports the Skin Cancer Foundation — so achieving adequate protection is crucial. According to the American Academy of Dermatology, that means selecting only water resistant, broad-spectrum formulas (which protects against UVA and UVB rays) in a SPF 30 or higher. To ensure you’re getting the sun protection factor your bottle of SPF promises, application technique is key: be sure to generously apply to all exposed skin 15 minutes before going outside, then add another layer every two hours or after swimming or sweating. To further lower your exposure, seek shade between 10 a.m. and 2 p.m. when the sun’s rays tend to be strongest.

Are There Truly Any “Reef-Safe” Sunscreens?

Unfortunately, we don’t really know yet. Oxybenzone and octinoxate are the first two ingredients to be officially banned in places like Hawaii, Florida, the US Virgin Islands, and Australia because studies show they damage reefs, even at incredibly low concentrations, and many more ingredients could follow based on new findings.

The National Oceanic and Atmospheric Administration (NOAA), a US agency tasked with the protection of some marine species (among many other important ocean-related things) has added eight other chemicals, including two mineral ones, to its list of ingredients that can harm marine life. The two mineral ingredients added, nano-zinc oxide and nano-titanium dioxide, refer to “nano” sunscreen particles, which some brands use because they blend into skin more discreetly. Meanwhile, the National Park Service asks visitors to avoid all sunscreen filters (“filters” meaning anything listed under “active ingredients” on the label that are what protect your skin from UV rays) except classic zinc oxide or titanium dioxide. This includes a very common alternative for oxybenzone named avobenzone, which could be the next ingredient to receive widespread scrutiny in the press.

Here’s where it gets really discouraging: Research shows the possible environmental danger of zinc on marine life (both nano and non-nano), so where mineral blockers have been widely considered better, their impact on the reefs could be just as bad as oxybenzone, the ingredient plastered on warning signs across Hawaii.

Luckily, not all zinc is created equal (there’s coated and uncoated, nano and non-nano, and so on) and more and more ocean-minded sunscreen companies are beginning to test their zinc for safety to isolate the safest types available. While it can all be a bit confusing as new research emerges, non-nano mineral filters are still currently thought to be best option for the ocean by NOAA, so non-nano zinc or titanium dioxide is second best only to UPF clothing, like swim shirts and other garments designed to protect skin from the sun. Ask any marine researcher what to use when visiting the reefs and they’ll make it easy: Stick to UPF clothing in the ocean since it protects better and won’t harm the reefs. (Plus think of all the cute wetsuit pics!)

Does Sunscreen In Makeup Work?

As more and more brands add sunscreen to complexion products like foundations, face powders, even highlighter and blush, it may feel like you’re well protected without a separate layer of sunscreen, but there are some things to understand. “If you're not using enough sunscreen, you're actually not getting the stated bottle protection,” explains Palermino, who notes that some brands will deceptively market these sunscreen-makeup hybrids with a model elegantly applying a small dab, when much more is needed to properly cover just the face. That means unless you apply your hybrid product like TikToker Meredith Duxbury — meaning a thick, dense, opaque layer of makeup that totally covers skin — makeup alone is not a proper substitute for a layer of sunscreen. And your day-to-day no-makeup makeup look? It isn’t providing nearly enough protection.

Be generous with a layer of sunscreen before makeup, rub, rub, rub until it’s fully set, then apply makeup at least 15 minutes before stepping outside.

As for the body? The American Academy of Dermatology states most adults need about 1 ounce — or enough to fill a shot glass — to fully cover their entire body, which should be reapplied every two hours or after swimming or sweating.

Why Doesn’t The US Have More Sunscreen Options?

If you’ve ever hit a French pharmacy or scrolled through a K-beauty e-tailer, you’ve noticed the plethora of sunscreen options lacking stateside. “In Europe and in Australia, [sunscreen] is not a drug, but sunscreens in the United States are treated like drugs,” explains Timmons. That means companies are limited to creating sunscreens using the same old ingredients approved by the U.S. Food and Drug Administration, even though countries like Australia have over a decade of research proving the efficacy and safety of newer filters.

“[U.S. manufacturers] just keep trotting along using the same old thing because it's convenient and because it's relatively cheap as an ingredient,” Timmons says. “Chemical makers have already created the infrastructure to manufacture that particular chemical…It makes certain people a lot of money…Until you push back, no one has a reason to look for a better solution.”

Luckily, this could be changing, partially due to consumer feedback. “There's a small group of scientists who are working vigorously with FDA to update these [regulations],” Timmons says. That means new ingredients could hit shelves soon as well as a possible new requirements that all sunscreens above SPF 15 be broad spectrum (which is really the only kind you should be using since it also blocks UVA rays, better known as the rays that age skin, and not just UVB, the rays that burn skin.)

Is There A Way To Try New Filters Available Overseas?

Palermino has been actively working on a sunscreen formula for her line Diuex — which she says she’s formulating in France and will sell stateside through a third party e-tailer — but hopes that new ingredients will be available stateside in the coming years as well.

“Hopefully in three years [the U.S.] will be in a place where we're actually able to compete on a global scale,” Palermino adds. Until then, she wears sunscreens with Tinosorb S, Tinosorb M, or Uvinul A Plus — a few filters available internationally — but it’s not because of safety. “I'm simply using these sunscreens because they're easier to apply, they look better with makeup over it, they don't burn my eyes and they don't irritate my skin,” she says.

Counterfeit sunscreen is very widespread online, so ask for a retail certificate before ordering online, she says. “I cannot tell you the amount of DMs I get from people [who buy an] iconic sunscreen from Japan [or France] from these third party sellers and there's no retail certificate,” she says. “It's a fake and they get sunburned!” Read: Be careful out there.

What’s The Best Type Of Sunscreen Available In The US Today?

With sobering skin cancer rates on the rise, the answer is simple: The one you’ll actually wear. Full stop. “Sunscreen is highly personal,” Dr Hartman says. “Find the one that works best for you and commit to wearing it every day. For me and my family, I prefer mineral-based, physical sunscreens because they are less likely to cause contact dermatitis and irritation. Thankfully, there are elegant options these days that don’t leave behind the dreaded white cast even on darker skin tones.”