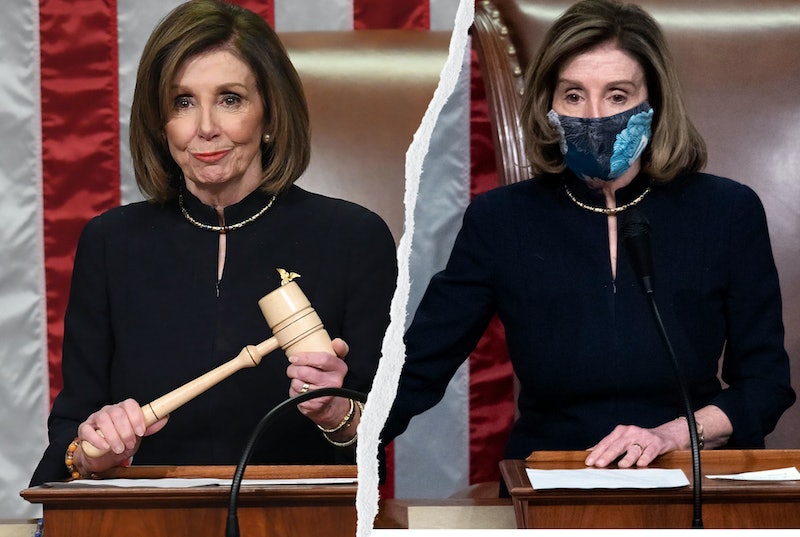 On Wednesday, Donald Trump became the first president in American history to be impeached not once, but twice. This time, it was for inciting the deadly insurrection at the U.S. Capitol that happened last week. The Speaker of the House of Representatives sent a not-so-subtle sartorial message when the house gathered to vote on the articles of impeachment. And Nancy Pelosi's impeachment dress sparked a lot of reactions on social media.

Pelosi presided over the historic vote wearing the exact same outfit she wore at Trump’s first impeachment. (You know, the one where he was charged with withholding $400 million in military aid from Ukraine and asking Ukraine’s president to find some political dirt on Joe Biden and his family. The Republican-led senate acquitted Trump of these charges.)

The outfit in question is a black, two-piece skirt suit. Back in December 2019, Pelosi accessorized the look with a gold, choker-style necklace, gold bracelets, and a striking gold brooch shaped like a ceremonial mace, which partly symbolizes “strength through unity” according to congressional historians.

This time around, Pelosi appears to have worn the same gold necklace but skipped the brooch in favor of a floral print face mask, an omnipresent reminder that the coronavirus pandemic is still going on and killing thousands of people every day.

The Speaker is well-known for using her wardrobe to communicate with the public. She previously wore the infamous suffragist-inspired white suit to announce that the house would be drafting impeachment articles (this was for impeachment number one).