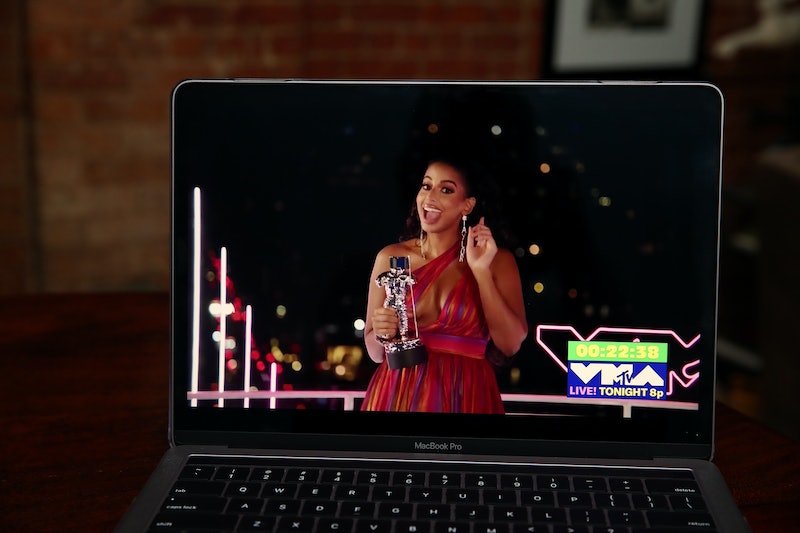 The VMAs red carpet is no stranger to political style moments, but one outfit is getting mixed reactions on social media. At the 2020 VMAs, MTV host Nessa Diab appeared onscreen wearing a pair of custom earrings that read "Breonna Taylor." Diab paired the earrings with a colorful one-shoulder gown featuring an asymmetrical neckline and bright stripes. On March 13, Breonna Taylor was killed in her home by the Louisville police while she was sleeping, and 6 months later, no formal arrests or charges have been made.

Immediately after viewers spotted Diab's earrings, they took to social media to share their thoughts on the bold sartorial statement. "Breonna Taylor earrings. An apology is needed along with several donations for this extremely disgusting behavior. @vmas @MTV and whoever this sick person is," one user tweeted. Another said: "She really spent all that money making Breonna Taylor custom earrings instead of donating the money to the cause."

Still, viewers felt Diab's outfit was insensitive especially given the fact that Taylor's name wasn't mentioned during the airing, as of press time. However, Diab often speaks out about Breonna Taylor on her own social media channels; she is an anti-police brutality activist who works with the Know Your Rights Camp organization alongside her longtime boyfriend Colin Kaepernick.

Diab has yet to address the criticism from her 2020 VMAs look, but watch this space for updates.