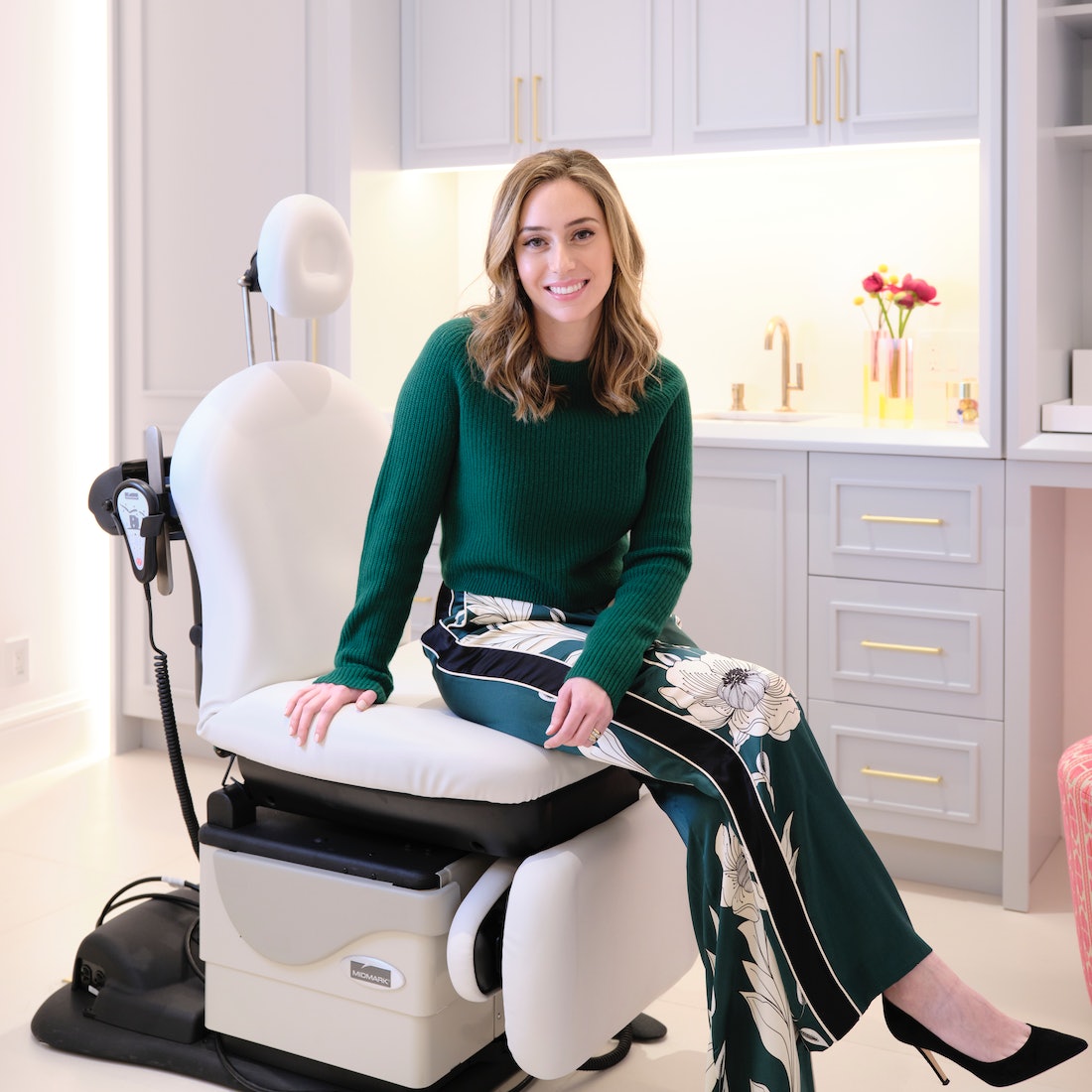 “Have you seen this?” Dr. Shereene Idriss opens the camera app on her phone and holds it up to a large painting behind the reception desk in her office. I thought it was of abstract circles, but through her camera the circles focus into a pointillistic rendering of a face. “I painted that!” Dr. Idriss exclaimed, before pulling me onwards in a tour of her new practice.

Painting is a new hobby for the Instagram famous dermatologist. She took it up during the pandemic, when suddenly she found herself without patients to see and no “work” to speak of. (“Oh yeah, I experienced that,” she said of the frantic requests from anxious New Yorkers for home visits. “I never went.”) Being on hiatus, however, turned out to be a fortuitous pause, with her chatty and entertaining #PillowtalkDerm series taking off on social media. Her explanations, recommendations, and condemnations of the beauty industry’s pandemic of misinformation (see: hyaluronic acid’s vastly overhyped status and her horrified reaction to Gwyneth Paltrow’s skincare routine) saw her followers grow from 2000 in 2018, to 375k. She parlayed that new reach into her own practice, Idriss Dermatology, open to a loyal and growing band of clients.

The new space resembles a boutique hotel lobby more than a waiting room. It sits three stories up, with large windows overlooking Bryant Park. There are plush sofas in front of what will soon be a custom fireplace (for now a jumbo Diptyque candle does the job) and jars of untouched sweets and a fully decorated Christmas tree. “That’s my daughter’s office,” Idriss joked, gesturing to one convertible room painted pink, while also nodding to the copper hardware on the windows that she polished herself. Tucked away down a corridor are the all important practice rooms — seven in total — though they too resemble Parisian apartment tableaus more than medical exam rooms.

I was complaining to my nurse that all these patients are coming in and repeating all this bullshit — ‘clean beauty,’ ‘non-toxic’ — and I was like, I'm sick of this shit!

“I want this to feel like a place people can come and hang out,” Dr. Idriss said, sitting cross-legged on the rug in front of me. Few people can call their office their happy place, but when you seek out the perfect real estate and have it designed just to your liking, happiness can be built. “I think I saw 60 spaces before we landed on this one, and this was the last one I saw.”

Like many New York City renovations, the process had a few hiccups along the way, including a handful of delays from her contractors. Joanna Vargas, celebrity esthetician and long-time friend of Dr. Idriss, remembers it very clearly. “On a Saturday night she texted me asking to talk to me and I knew something was wrong,” Vargas told me over email. “She was frantic about not having the space done on time and having bookings.” Vargas, who met Dr. Idriss through fashion photographer Roderick Angle, welcomed Dr. Idriss to see patients at her spa during the interim before she even knew how it could feasibly be done. “I know how much love and care she has taken to build what she has.”

Dr. Idriss ended up setting a temporary practice in an empty office space in her new building, but that support from a peer (and, realistically, a competitor) is a rare thing. Vargas describes Dr. Idriss as “all heart,” which is perhaps true given that she’s a board-certified New York City dermatologist giving away free medical advice on social media. Among her followers are several high-profile blue-check accounts (Jennifer Aniston, Emily Ratajkowski, and Mindy Kaling among them), but she also has random followers DMing her before and after photos of their skin, having followed her advice. She shows me one such example on her phone; it’s a close-up series of photos of a woman’s face, the “before” with significant redness and hyperpigmentation and the “after” showing a smooth and much more even-toned complexion. “She actually came to see me when she was in New York to say thank you. It was very sweet. But I was like, why are you paying a consult fee — just text me!” Dr. Idriss said, laughing.

Dr. Idriss hails from a family of doctors; her grandfather and father are both pediatricians, as are her older sisters Nadine (a pediatrician) and Nayla (an internist). Born in Lebanon, her family fled the civil war just days after Shereene, 37, was born. They settled in Washington DC, where Dr. Idriss grew up, but with immigrant parents comes a preparedness mentality, as many first- and second-generation Americans know, which informed her choice of path.

“[My parents] always said, have a career you can fall back on if ever shit hits the fan,” she explained. “And have something where you're never dependent on anyone, whether it's a husband, wife, a corporation, an employer. Have something that you can recreate wherever you go because you never know what happens in life.”

Dermatology happened to combine her scientific inclinations with her passion for people. Originally, she applied for a seven-year program studying plastic surgery at George Washington University. It was during her last year of undergrad there, as she accompanied her sister Nayla Idriss to a dermatologist visit when a lightbulb went off. “I realized how fascinating it was that my sister, the patient, had something she could see that she wanted to fix. It wasn't the doctor who was convincing her that she had a problem, you know? And so for me, I was like, half the battle's gone, so that's [great]!” she said. “I felt like with plastics, people are trying to change who they are whereas, in dermatology, you're just trying to help people feel more comfortable in their own skin.”

That experience caused her to switch studies, which didn’t surprise her family. “She has always been the artist in the family, alongside our older sister,” her sister Nayla shared. “Anything that involved her using her hands and creativity she excelled at.” The mantra in her Instagram bio and on Idriss Dermatology’s website — Subtle is the new dramatic — sums up the creativity she strives for. Dramatic change is never the goal, she preaches, favoring gradual, consistent progress towards natural-looking results and healthy skin. She often invites patients back for check-ins a few weeks after an initial visit or treatment just to double-check their results. “Building those relationships over time and helping people through their life, I felt was much more interesting than just having one-offs [with plastic surgery],” she said.

What has been more unexpected, though, is the relationship she’s built with people on the internet. “It started very, very sporadically,” Dr. Idriss explained of #PillowTalkDerm’s origins in July of 2018. “I was complaining to my nurse that all these patients are coming in and repeating all this bullshit — ‘clean beauty,’ ‘non-toxic’ — and I was like, I'm sick of this shit! [My nurse] was like, ‘stop venting to me, go online and just vent to Instagram!’” So she did. “I just wanted to vent. And then it snowballed.”

Demystifying and debunking opaque ingredient functions and marketing misinformation could easily dominate the entirety of her content (sometimes it does), as she admits that she has some views that go against the grain. “I'm very proud of myself for never aligning a hundred percent with a brand. And I've only been very selective about sponsorships,” she said, naming just two campaigns — one with Galderma for rosacea awareness and the other with SKII for its educational opportunity to learn about how their essence works. Rather than shill for other brands, Dr. Idriss had some ideas of her own when it came to formulating skincare. That’s why she’s starting her own.

The idea was always in the back of her mind, but it wasn’t until she contracted COVID last year and was quarantining in her home in Connecticut that she had time to strategize. She interviewed brand founders for her One Night Stand Instagram Live series (Bobbi Brown, Marianna Hewitt, Tata Harper, Cassandra Grey, and of course, Joanna Vargas) to understand the backend of the business, and then after one viral sunscreen scandal on Skincare Instagram (R.I.P skincare brand Purito), she polled her followers if they should start a no-bullshit brand that actually worked. “I was alone for two weeks in my room, so it was a little bit off the cuff. I was like, who wants to create a skincare line? Do you think we should do it? And it was like 99% ‘Yes’ out of, no joke, 20,000 people. So I was like, OK, done!”

She’d already had a private lab in mind to hire and immediately called her lawyer to sign contracts and get everything in motion. “I come out of the room, and [my husband] was like, ‘what did you do the past two weeks??’” she laughs.

The forthcoming line, aptly named Pillowtalk Derm, will launch with five products, all of which are hush-hush for now but are in the midst of clinical studies — a dermatologist’s most trusted form of vetting. She’s also self-testing, showing me before-and-after results of three of her products thwarting a melasma flare-up from two months ago. The brand’s co-founder Said Dabbagh is a childhood friend of Dr. Idriss (their families are both from Lebanon and both grew up in D.C.) who has a longstanding career in beauty marketing and development for the past 14 years with L’Oreal, Shiseido, and most recently as CMO of Fekkai Brands. “Way before we even thought of products, Dr. Idriss spent years building a community of skin nerds. Community and education have and will always be the foundation of our brand,” he shared.

Between her patients and Instagram followers, Dr. Idriss has no shortage of marketing research on what people’s most pressing concerns are. But more powerful than that, she’s earned their trust. “Being a great physician starts with the ability to know how to listen and hear what your patients are saying,” Dabbagh says. “Her commitment to consistency over intensity means she’s not afraid of being honest about her beliefs regarding ingredients and techniques.”

Pillowtalk Derm is tentatively set to launch sometime next spring. It’s a tough market, with dozens of products releasing every week, each with more promises for flawless skin. “People are so exposed to these [marketing] claims behind beauty standards, they can’t help but repeat them, even if they’re not necessarily correct,” she explains. “It’s going to take a lot more than Pillowtalk Derm to fight the machine. It’s a culture with billions of dollars behind it, and I’m in debt!”

Judging by the loyalty of her clients, that won’t be a concern for long. Lisa Giammarino has been patient of Dr. Idriss for the past eight years, after initially trying a laser facial treatment with her at Wexler Dermatology, where she used to work. “I felt like I was talking to a friend that I had known for years,” Giammarino said. After a few months, Dr. Idriss recommended a thorough skin spot check. “She noticed a tiny spot on my foot that most doctors would probably have overlooked,” Giammarino went on. “It turned out to be in the early stages of melanoma.” Giammarino now sees Dr. Idriss about twice a month for “various different treatments.”

Another patient, Nic, a 40-year-old entrepreneur, has been in Dr. Idriss’s care since “circa 2013 when she posted NYC sunsets on Insta,” they said, via email. They met when Nic made an emergency appointment at Wexler Dermatology. “I remember sitting in the exam room expecting to see Pat when a random brunette with a white coat and a bouncy ponytail skated into the room. I was not happy. I was like, ‘Who are you? (fabulous shoes, by the way) — [but] there is no way you are touching my skin.’” Dr. Idriss solved their problem and has been their friend and dermatologist ever since. “She’ll be Botoxing me when we’re in rocking chairs and beyond.”