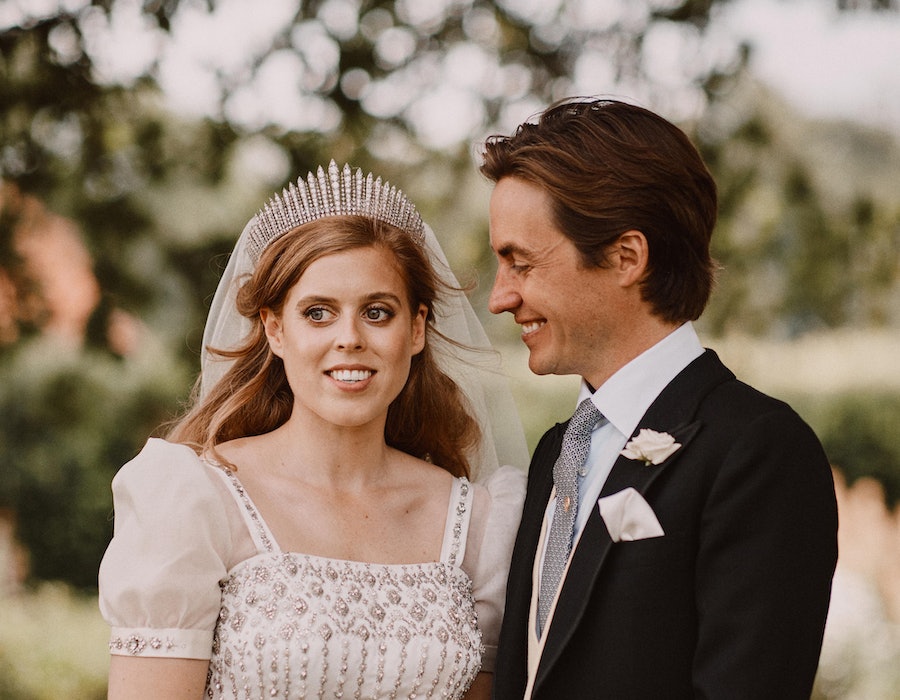 Married in a small ceremony on July 17, Princess Beatrice paid tribute to her grandmother in the most beautiful way. Dressed in a vintage wedding gown that belonged to the Queen – remodelled with organza sleeves to respect the place of worship's dress code – Beatrice also accessorised with the tiara worn by the Queen on her own wedding day.

The tiara holds great significance within the royal family, and can be traced all the way back to Queen Victoria. Here are seven things you might not know about Princess Beatrice's wedding tiara.

The tiara is named after Queen Mary, who was given a diamond necklace by Queen Victoria on her wedding day in 1893. The necklace was "fashioned into a fringe design", which Queen Mary wore in her hair. In 1919, she asked British jeweller Garrard & Co. to make the necklace into a tiara, which featured "an elegant series of alternating tall and short bars of scintillating white diamonds," as the jeweller writes.

2. The tiara has Russian origins

Royal expert , author and historian Vincent Meylan provided a detailed backstory of the tiara on Instagram, revealing that the design was inspired by tiaras worn by Russian tsarinas. The first of its kind was worn by Empress Elizabeth Alexeievna.

As many tiaras took the same Russian inspiration, the Queen Mary Fringe is often mistaken for the Hanoverian Fringe, as it's similar in design, although a little taller. Another of Queen Elizabeth II's most recognisable tiaras is the Girls of Great Britain & Ireland, which is also linked to her grandmother Queen Mary, who passed on the tiara as a wedding present. Queen Mary is said to have worn the tiara "for a number of state banquets, and is depicted wearing it on certain British and Commonwealth banknotes and coinage," per Hello magazine.

3. The tiara has been passed down for five generations

Starting with Queen Victoria, the Queen Mary Fringe has been passed down for five generations. During that time, it's been worn by Queen Mary, the Queen Mother, Queen Elizabeth II, Princess Anne, and now Princess Beatrice for weddings and other royal occasions.

4. It remained in the Queen Mother's jewellery collection until her death

Queen Mary gave the Queen Mother the tiara upon George VI's succession to the throne, who wore it for her first official portrait as Queen, "and quite frequently during the 1930s and 1940s," per the Royal Watcher Blog.

When the Queen Mother passed away in 2002, Queen Elizabeth II inherited her mother's jewellery collection, including the Queen Mary Fringe tiara.

5. Queen Elizabeth wore the tiara on her wedding day & it snapped

Two hours before her wedding to Prince Philip in 1947, the Queen Mary Fringe tiara snapped as it was being fixed to the Queen's veil. Per the Telegraph, the Queen Mother said to her "understandably upset" daughter that they still had "two hours and there are other tiaras".

Garrard & Co. took the tiara to their workshop "under police escort, where it was welded back together and returned" just in time for the ceremony. If you look closely at photos from the time, you can see a small repair gap in the middle of the tiara.

6. The tiara could also be worn as a necklace

In fact, the tiara hadn't snapped on the wedding day, but the catch had gone where it had previously been transformed from a necklace. In 2018, the Queen was reported to have explained the story to the Duchess of Cambridge, per Hello: "The catch, which I didn't know existed, it suddenly went. And I didn’t know it was a necklace, you see… I thought I'd broken it… We stuck it all together again, but I was rather alarmed."

7. The Queen has worn the tiara on two other occasions

The Queen hasn't worn the Queen Mary Fringe much since inheriting it from her mother, but she did wear it to an official dinner, and for the New Zealand Diamond Jubilee portrait in 2011.