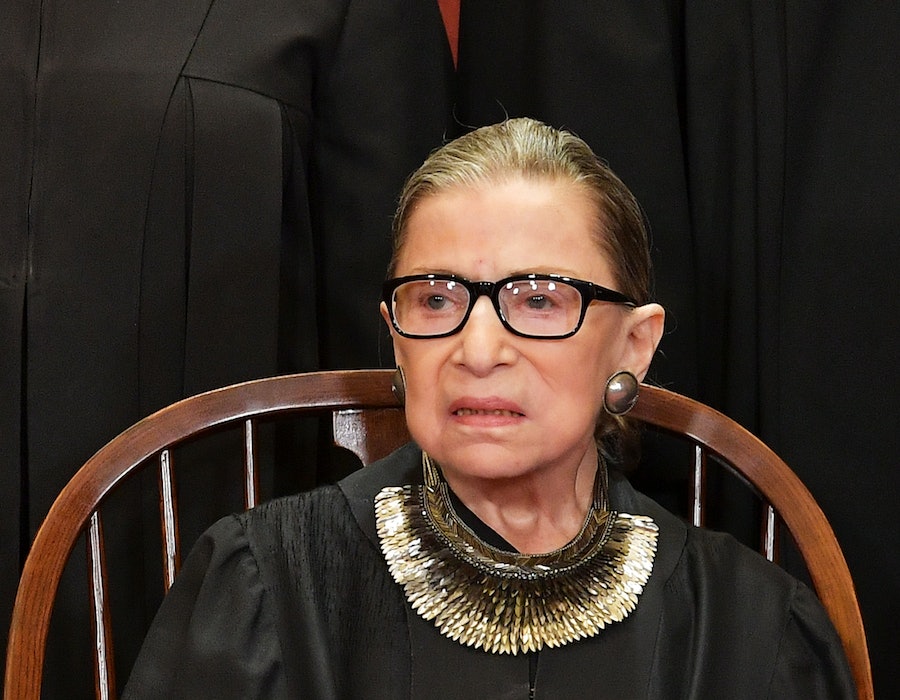 Ruth Bader Ginsberg passed away on Sep. 18, 2020, after making a historic mark on the world through her work on the United States Supreme Court. Alongside the many strides she made for women's right, she was also revered as a fashion icon, known for her multitude of collars and the messages behind them. Now, fans can pay homage to that style legacy with the re-release of RBG's Dissent Collar at Banana Republic.

The collar, which RBG chose to wear when expressing her disapproval, was crafted by Banana Republic in 2012. It was, as she aptly named it, her “Dissenting Collar.” In an interview with Katie Couric in 2014, she explained, “This is my dissenting collar. It looks fitting for dissent.”

When Banana Republic launched a similar version of the rhinestone-clad collar with a black velvet string, it quickly became something that all RBG fans wanted for their own. Though sold out for the past eight years, the collar has been re-released by the company to honor the late Justice Ginsberg.

Banana Republic announced the re-issue in their Instagram stories over the weekend, adding that 100% of the proceeds until December 31, 2020 would be going towards the International Center for Research on Women (ICRW).

This is not the first time that the necklace has been re-launched, however, with it first showing up again in support of RBG in 2019, when 50% of proceeds were donated to the ACLU Women’s Rights Project, which was, of course, co-founded by Ginsberg herself.

Though the $98 necklace is currently sold out again, which should come as no surprise, the brand’s website assures their shoppers that they are “working hard to get them restocked as quickly as possible.” You can check back on their website for the re-stock.

Banana Republic The Notorious Necklace
Banana Republic
More like this
Mrs. Wheeler Wore A Vagina Necklace In 'Stranger Things' Season 4
By Allie Fasanella
10 Fashion Trends You're About To See Everywhere & 10 That Make You Look Outdated
By Nicole Zane
These Bras & Underwear Seem Expensive But Are Actually Cheap AF On Amazon
By Nicole Zane
These Stylish Pieces Under $35 Are So Popular Amazon Keeps Selling Out Of Them
By Allison Bolt
Get Even More From Bustle — Sign Up For The Newsletter