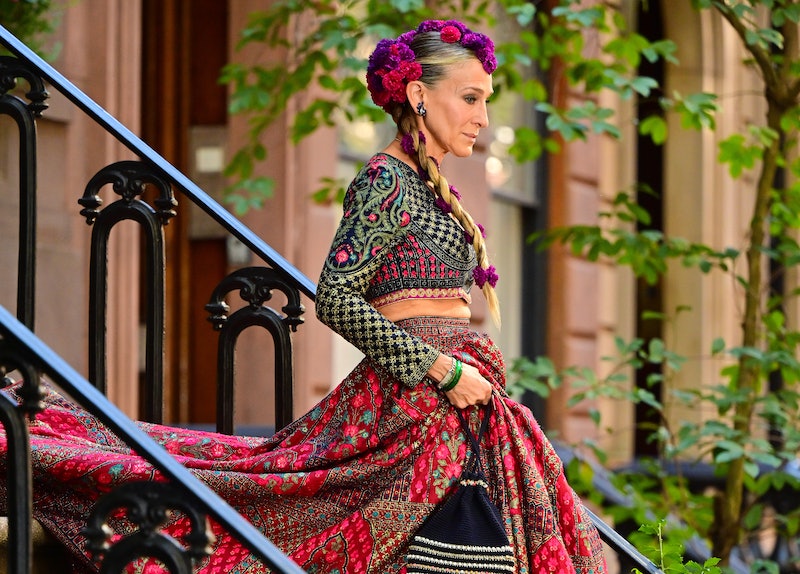 Sex and the City fans are patiently waiting for the debut And Just Like That, coming out on HBO Max this December. Sarah Jessica Parker, Kristin Davis and Cynthia Nixon are all returning to their roles and have been treating fans to behind-the-scenes sneak peeks along the way.

For Parker, reprising the role of Carrie Bradshaw has meant reprising her, let’s say, unique take on fashion also. And fans have loved keeping up with the various outfit changes for And Just Like That. From a flowy white tulle skirt and multi-coloured striped jumper combo to a cream jumpsuit completed with a floral statement blazer. Of course we can’t forget the Kim Woodburn paramour get-up. While fans continue to obsessively pore over the outfits online, there’s one recent wardrobe choice that isn’t getting much air time at all.

Pictures uploaded today (October 22) show Parker in a Falguni Shane Peacock Lehenga. In one photo Parker is seen smiling to the camera and in another she is walking down the steps whilst hiking up the skirt, which is a traditional, Indian garment.

Falguni Shane Peacock is a luxury South Asian clothing brand based in Mumbai, with their signature pieces incorporating feathers, sequences, and prints. The maroon lehenga seen on Parker is available to buy on their website. With gold metal thread work details, foliage motifs, and multicoloured silk threads embroidered throughout the piece, it comes together to create a classic style. And it clearly caught the eye of the And Just Like That costuming team.

While some are speculating that the dress could be Carrie’s outfit of choice for an Indian wedding – with suggestions that Sarita Choudhury’s character of Seema is getting married – it’s difficult not to feel concerned considering the show’s track record with cultural appropriation and insensitivity.

Throughout the original series, there were a number of questionable moment, including Samantha Jones’ behaviour in season three when dating a Black man and, in a later series, when she wears an afro wig and refers to herself as Foxy Brown. And unfortunately the movies followed a similar pattern. Sex and the City 2, set in Abu Dhabi, faced criticism for dressing the four leading characters in burqas.

With this in mind, it’s concerning to see Carrie Bradshaw, a white woman, flaunting around in traditional South Asian dress. Whilst think-pieces galore have been published discussing what to expect from this new show set in the Sex and the City universe, and unpicking in intricate detail the updates we are receiving, there has been an unusual silence on these particular shots.

Only time will tell whether the Sex and the City cast and crew have reflected on the concerns raised over the past two decades regarding the regular discrimination in the show. Will the context and plot respectfully explain the reason for this latest outfit choice? We can only hope.