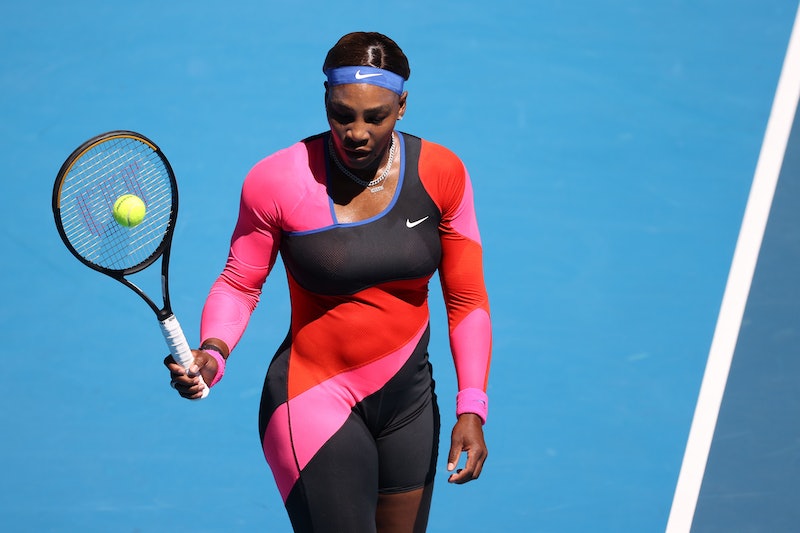 Serena Williams may not be advancing in the Australian Open, but her on-court fashion remains just as influential as ever. Never one to throw on your typical tennis ensemble, the legendary athlete and fashion designer stepped out on the court in Melbourne wearing one of her signature one-piece looks. And Serena Williams' Australian Open catsuit has a hidden meaning that will make your heart melt.

The striking red and black garment was cut asymmetrically and featured one leg, an unmissable nod to Florence Griffith Joyner, aka Flo-Jo, the American track and field athlete who is widely considered the fastest woman of all time.

Flo-Jo often competed in one-leg tracksuits, and last week when Williams debuted her own version, she explained in a post-match press conference that the Nike-designed look was intended to pay homage to the late track star, who passed away in 1998.

“I was inspired by Flo-Jo, who was a wonderful track athlete, amazing athlete when I was growing up,” Williams said. “Well, watching her fashion just always changing, her outfits were always amazing. This year we thought, ‘What can we do to keep elevating the Serena Williams [look] on the court?’ The Nike team actually thought of this design of inspiration from Flo-Jo. I was like, ‘Oh my God, this is so brilliant.’”

It was a fitting tribute from icon to icon. Williams herself is often regarded as not just the greatest tennis player to ever live, but the greatest athlete as well. Although she lost in straight sets to Naomi Osaka in the Australian Open women’s singles semifinals, her fashion, per usual, made a major statement that absolutely no one can deny.