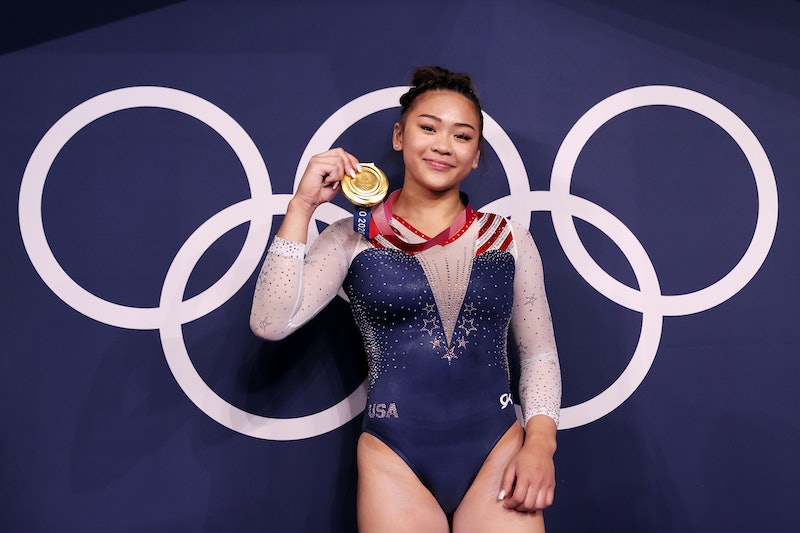 Though gymnasts uniforms are mostly functional, they can also carry great significance and symbolism through color, silhouette, and design choice. Through the years, it’s remained fairly constant that gymnasts are clad in a long-sleeved leotard, but each day calls for a different design and each style carries with it a different meaning.

At the 2021 Summer Olympics, currently being held in Tokyo, the women’s individual all-around final was held on Thurs., July 29, with gymnast Suni Lee debuting the “Liberty Leotard” from GK Elite, an official apparel sponsor of the national team.

The design of Lee’s red, white, and blue long-sleeved leotard is inspired by similarly flag-covered looks from both the 1996 and 2004 Olympic gymnastics uniforms, the brand said in a press release.

This year’s version consists of a navy blue body and white sleeves, with a red and white striped shoulder and top of chest. The leotards are crafted with metallic spandex, and embellished allover with 5,639 Swarovski crystals.

While the leotard is stylish enough on its own, the symbolism behind it is especially fascinating. In fact, the hidden messages in Lee’s leotard basically predicted her win. GK Elite explained that there’s a star crystal embellishment on the bodice that is “strategically designed to represent a medal hanging around the athlete’s neck.”

And win she did, taking home a gold medal after her performance on day six. To put it plainly, a medal was incorporated in the design, and then Lee went on to actually win it in real life. Mind blown.