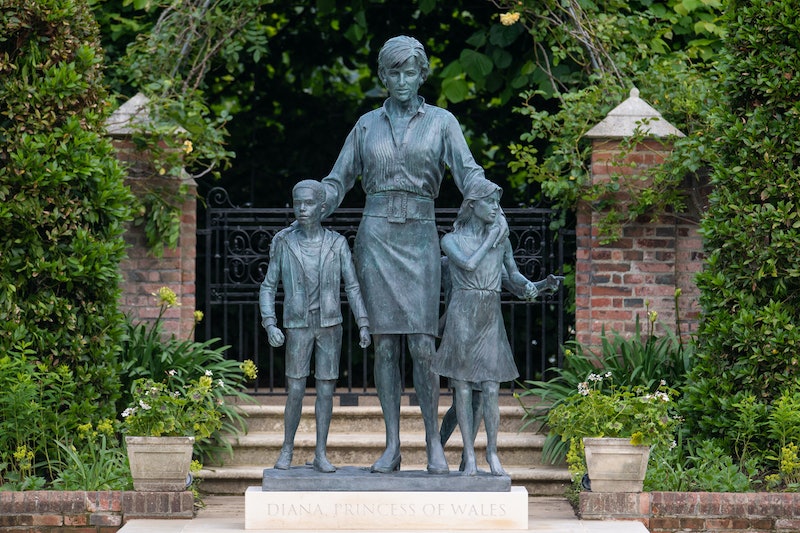 The statue of Princess Diana has been unveiled at the Sunken Garden in Kensington Palace today, July 1, 2021, on what would have been the late royal’s 60th birthday. Both Prince William and Prince Harry were in attendance at the reveal to honour their mother side by side. The statue sees Diana stand with her arms around two children, wearing an outfit that has a special meaning.

The bronze statue —designed by artist Ian Rank-Broadley — was created to “reflect the warmth, elegance and energy of Diana,” who is shown to be standing with three children, which represents the “universality and generational impact” of her work.

Diana — who was known for her timeless style — is seen wearing a high waisted pencil skirt, a front-pleated collared blouse, and a buckled belt. The look is elegant and sophisticated, while also giving a touch of casual class, which she was known for.

The late Princess tried out many looks while she was alive; many of which played to trends and were fashion-forward. But the more classic ensemble shown in the statue was picked for a specific reason to honour a certain time in her life.

Kensington Palace said the outfit was based “on the final period of her life as she gained confidence in her role as an ambassador for humanitarian causes and aims to convey her character and compassion.”

Prince William and Prince Harry released a joint statement to celebrate the statue and honour their mother, beginning: “Today, on what would have been our Mother’s 60th birthday, we remember her love, strength and character – qualities that made her a force for good around the world, changing countless lives for the better.”

You can view the full statement here.