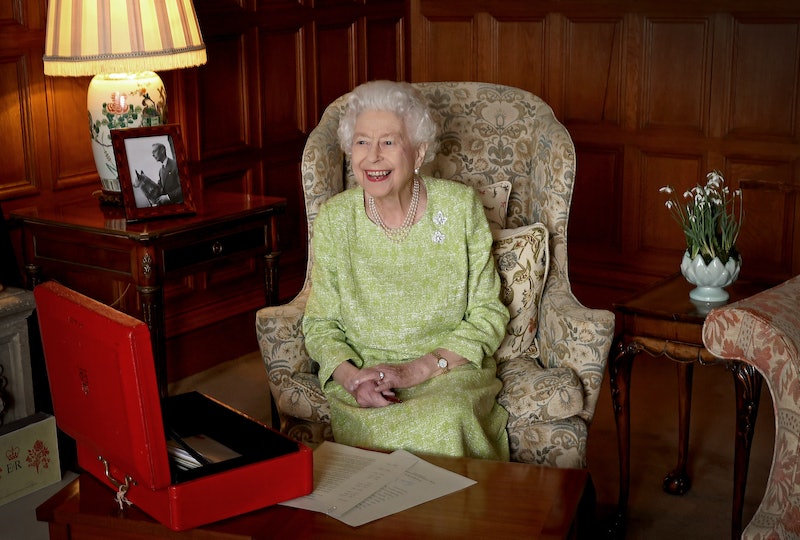 2022 is set to be a major year for Queen Elizabeth as she celebrates her Platinum Jubilee. On Feb. 6, she marked her accession to the throne with a message of reflection and gratitude, in addition to a brand new, gleaming photograph of the monarch at Sandringham. In the portrait, a framed photo of the monarch’s father King George VI can be seen beside her, marking seventy years since his death. The photograph also pays tribute to two more important people in the Queen’s life, but at first glance it can be hard to recognise. Thankfully, former royal butler Grant Harrold shared his expertise on TikTok, revealing that the Queen’s brooches carry significant meaning.

As Harrold explains, the brooches were given to the monarch by her mother when she was 21-years-old, four years before she would take to the throne herself. The former butler noted that “it’s quite unusual that we ever see them,” adding that it’s most certainly “a nod to her great father and, of course, her mother.”

What you may not have seen, however, is the vase of snow drops on the wider version of the photograph. This vase is cropped out of the picture shared on social media, but it carries great significance. Per Cosmopolitan, snowdrops signify love and devotion within the royal family as Queen Victoria carried a bouquet of them on her wedding day to Prince Albert (his favourite flower). They also blossom in abundance at Wood Farm Cottage in Sandringham, where Prince Philip spent his retirement.

It’s also clear that at 95-years-old, Queen Elizabeth is still adamant on continuing her work as a monarch. One of her official government boxes is clearly on display in the photograph, showing that “even though she’s now coming into her 96th year [...] she is very much going to continue being a monarch,” Harrold concludes.