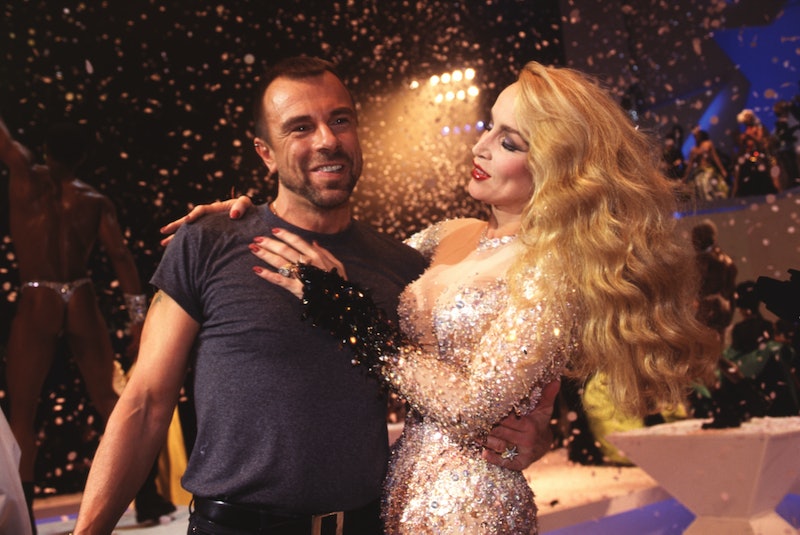 Just four days after the passing of influential fashion journalist André Leon Talley on Jan. 18, the fashion industry has lost another great. Fashion designer Manfred Thierry Mugler’s death, of “natural causes” on Jan. 23 at the age of 73, was confirmed via the designer’s and the brand’s official social media accounts.

“It is with deep sadness that the House of Mugler announces the passing of Mr Manfred Thierry Mugler,” the fashion house wrote on Instagram. “A visionary whose imagination as a couturier, perfumer and image-maker empowered people around the world to be bolder and dream bigger every day.”

Born in Strasbourg in 1948, Mugler moved to Paris in his early twenties to create his first solo collection, named Cafe de Paris, in 1973, a year before founding the Thierry Mugler brand. He was known for pushing boundaries with futuristic, sci-fi styles and was famous for his bold, powerful-shouldered, cinch-waisted silhouettes that became known as “power dressing” and dominated the ‘80s fashion scene.

His famous 20th anniversary extravaganza at the Cirque d’Hiver became known as the “Woodstock of Fashion” for its some 300 looks on models and actresses, such as Jerry Hall, Naomi Campbell, Kate Moss, Tippi Hedren, and Jule Newmar, and a finale performance by James Brown as “confetti rained down and male go-go dancers gyrated”, per the New York Times.

Whilst Mugler left his eponymous brand in 2002, his influence and input in the fashion industry was far from over. He created a number of iconic looks for celebrities such as Lady Gaga, Beyoncé and Kim Kardashian under the House of Mugler name since his “retirement” from fashion. He became an artistic advisor to Beyoncé, creating the costumes for her “I Am… World Tour” and his “wet couture dress” for Kim Kardashian to wear to the Met Gala in 2019, inspired by Sophia Loren in the film Boy on a Dolphin, was one of the most talked about red-carpet looks of recent years. The brand was later revived in 2010 under the creative direction of stylist Nicola Formichetti and later Casey Cadwallader.

“You can’t take fashion too seriously,” Mugler said in a 2017 interview. “The whole thing is about giving the women who wear your clothes some power, some fun, some service. It’s great to make it as art. But first, it’s a service to someone.”

“He was timeless and ahead of his time,” supermodel Jerry Hall – the face of his bestselling Angel perfume – told The New York Times in 2019. “He knew all about gender fluidity and his clothes reflected the heat and sexuality of the late ‘70s and early ‘80s.”

Tributes have poured in from celebrities all over the world. Commenting under the sad news on Instagram, Brigitte Nielsen wrote: “Such an icon. Unbelievably sad.” Models Bella Hadid, Winnie Harlow, and Heidi Klum joined Neilsen in paying tribute by leaving comments on the post. “I cannot believe this is true sending love to you all. Thierry was a force of creativity and kindness,” added Georgia May Jagger.

Kourtney Kardashian, meanwhile, posted a picture on her Instagram story of her famous family all dressed in Mugler's designs, whilst fashion designer Brian Atwood said he was a “constant inspiration”. Sex And The City star Kristin Davis added that it was "another horrible loss" of “visionary Thierry Mugler”.

Keep reading for a handful of tributes to the great fashion icon.