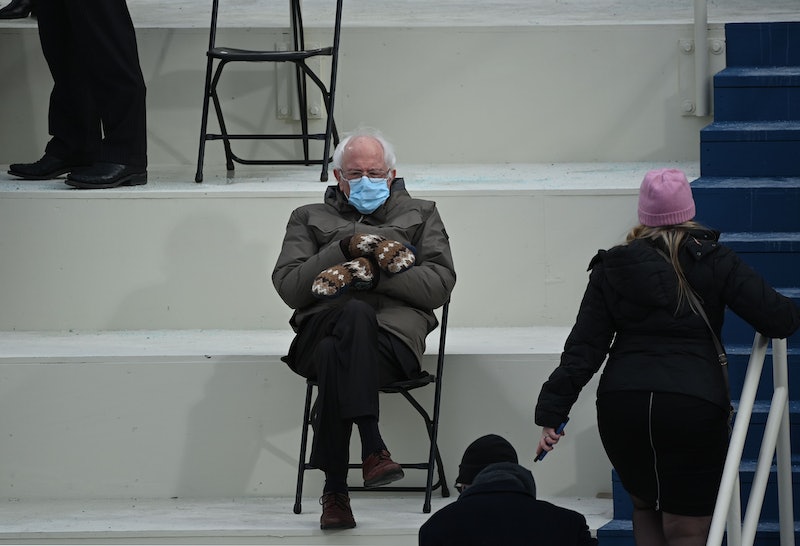 On an Inauguration Day of historic firsts, America joined together in unity — an oft-repeated word from President Joe Biden's address — to stan one thing in particular: Sen. Bernie Sanders' inauguration outfit, a sensible, familiar choice amid a sea of jewel tones.

The Vermont senator arrived at the Capitol sporting brown mittens and a tan windbreaker, which Twitter users recognized from his notorious campaign meme. The mittens, according to Buzzfeed News reporter Ruby Cramer, come courtesy of a fellow Vermonter, teacher Jen Ellis, and are made out of plastic bottles, which is supremely on-brand for the vocal proponent of environmental protections. One of his most high-profile supporter accounts, People for Bernie, used the viral look as an opportunity to thread details of his platform, which includes issues like minimum wage, widespread health care coverage, and COVID-19 relief. Others likened Sanders' vibe to those of parents at soccer games, introverts at parties, and dads running errands. Ultimately, America seems to relate.

By and large, the tweets about his wardrobe added moments of levity online, juxtaposed next to emotional posts about the end of Donald Trump's reign and the incoming administration. (If you want to make your own custom Sanders meme, the user @taber has you covered.) Here, some stand-out commentary about the Vermont senator.

On The Look As A Power Move

Some viewers read into Sanders' choices as a purposeful rebuttal to the pageantry of Inauguration Day.

On The Relatability Of His Clothes

As much as we want to don a plum palazzo pant suit, à la Michelle Obama, many users found their IRL taste more akin to the senator.

And A Few Miscellaneous Winners

More like this
The Internet Can’t Get Enough Of Viktor & Rolf's Upside Down Dresses
By El Hunt
Kylie Jenner Joins The Bondage Trend In At Paris Fashion Week
By El Hunt
Every Single Thing In Maya Jama’s 'Love Island' Wardrobe
By Darshita Goyal
Hailey Bieber Looks Just Like Princess Diana & I Need To Copy Her ASAP
By Sophie McEvoy
Get Even More From Bustle — Sign Up For The Newsletter
From hair trends to relationship advice, our daily newsletter has everything you need to sound like a person who’s on TikTok, even if you aren’t.