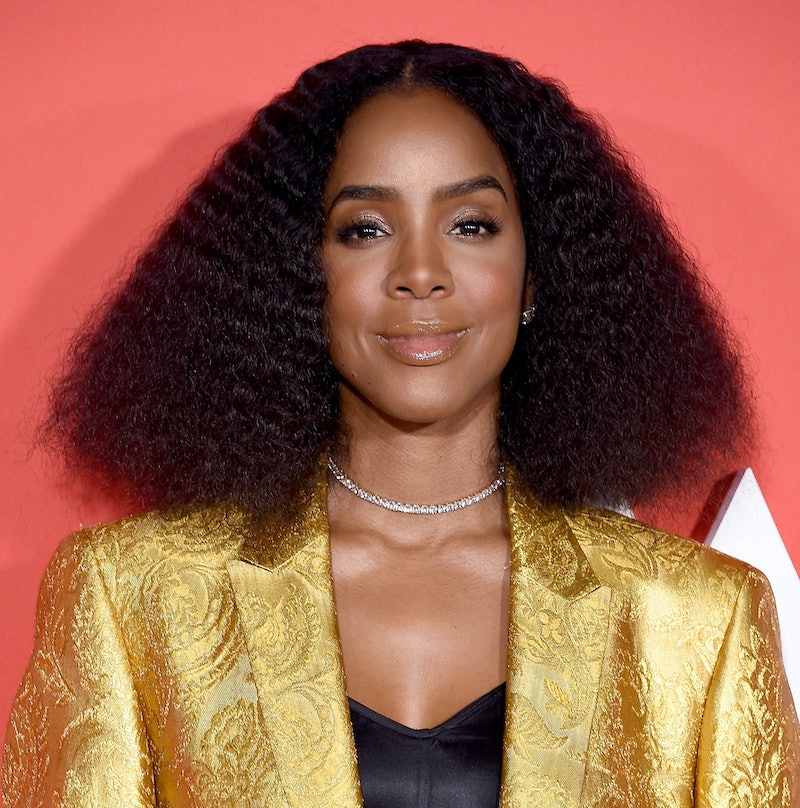 Since Kelly Rowland made her music industry debut in the late ‘90s, the superstar hasn’t been shy when it comes to switching up her hair. Rowland's hairstyles over the years have ranged from pixie cuts, to layered bobs, to long beach waves with side-swept bangs, and even bright red highlights in the early '00s.

But while being in the spotlight for over two decades has granted the singer some versatility when it came to how she wore her locks, Rowland — whose natural hair texture is 4C, her stylist Michy Richy shares with Bustle — is fully aware that many black girls with similar textures aren't afforded these privileges. In fact, some have even been punished for simply wearing their hair in natural styles.

In August 2018, two sixth-grade students, Faith Fennidy and Tyrielle Davis, were both reportedly suspended from Christ The King Parish School in Terrytown, Louisiana, by principal Dawn Castillo for wearing their hair in single braids — which often requires mixing extensions with the natural tresses. According to the school, any use of hair extensions violates its dress code policy.

"I couldn't believe that they were kicked out of school," Rowland tells Bustle, explaining that these types of actions can make black girls develop insecurities when it comes to their hair. "[The principal] should be ashamed of themselves ... because you don't do that to kids. They have to grow up with that."

Bustle reached out to Christ The King for further comment, but did not hear back by the time of publishing.

Both Fennidy and Davis were allowed back to class a week after being suspended, but the girls' parents told WWL-TV that they believe the dress code rules are discriminatory against students with afro-texture hair — not only because braids are a common hairstyle in the black community, but also because even after the student's altered their hairstyles, the parents were still reportedly told the girls wouldn't be allowed back in the classroom.

And based on the findings of a 2016 study, their sentiments may be absolutely valid.

The “Good Hair” Study, conducted by the Perceptions Institute, worked with over 4,000 racially diverse participants to discover if various groups had any biases against natural hair. The research concluded that regardless of race, the vast majority of participants "showed implicit bias against black women’s textured hair." And white women in particular were found to view natural hair "as less beautiful, less sexy or attractive, and less professional than smooth hair."

This type of discrimination is why Rowland is ready to flip the script on hair standards through her music. In partnership with Dove, Rowland released a music video for her new song "Crown" on Feb. 6, featuring both Fennidy and Davis, along with other girls to encourage any young person who's ever faced hair discrimination to embrace their beautiful, innate qualities.

But Rowland believes there’s still so much more work to be done to eradicate discrimination against natural hair across the board. "I don’t feel like there’s been too much progress and that’s why doing this campaign was so exciting, necessary, and important," the mother-of-one shares, adding that it's vital to encourage girls — especially black girls — to start loving their natural hair early on in life. "I was one of those kids who had ... insecurities [with] my hair," Rowland reveals. "I went to a predominantly white school, and I remember seeing kids that would easily be able to jump in pools and put their hair up. But it was always a [process] for me as a little black girl, because I would have to always wash, condition, blow dry, and then straighten my hair."

However, according to Rowland, it’s not only the outside world that contributes to these insecurities. Seeing as 4C hair has long been viewed in the black community as "bad hair," black parents can also contribute to a child feeling uneasy about their coily texture if they use negative language to describe kinky, 4C locks.

"If your kids feel like it’s a problem for you, they’re going to think they’re a problem or their hair is a problem," Rowland asserts. "You have to be so careful with the energy that you give off."

Thankfully, as a child, Rowland had the support of her family at home. This not only allowed her to embrace her coils, but gave her the space to learn how to work with her natural curls as she grew up. While the star shares that her aunt used to braid her hair as a little girl, it was a cousin named Shaw who first taught her how to work with her hair. "I remember watching her twist her hair and she just made it so cool," the star recalls. "I was so happy to have her be that great example."

Today, Rowland is a prime model to showcase how versatile 4C hair can be — seeing as she's fully open to try nearly any style. "I have a hairstylist who likes to have fun and be creative," she mentions. "We play with shape, color, and texture. We play with cuts, we play with everything. It’s really fun because I feel like there’s no limit."

But while the singer does add that she typically doesn't like to separate hair textures into categories — as she insinuates that this can, in some cases, cause division — she still believes that if schools can begin to recognize that hair isn’t universal, young black girls with kinky hair would finally have safe spaces to wear their hair in its natural state.

Still, Rowland isn’t looking to place blame on those who may be ignorant or lack knowledge when it comes to natural, coily hair. Instead, her goal is to educate and steer the conversation in a positive direction through the message of her music. "I think that if you teach and bring knowledge, then that actually starts to solve problems and answer questions," she says. "It could be a challenge, but it’s time to figure things out, because there’s always a solution."

More like this
Pamela Anderson's Most Iconic Makeup & Hairstyle Moments
By Olivia Rose Rushing
9 Valentine's Day Hairstyles For 2023 That Look So Dreamy
By Audrey Noble
Blake Lively Debuts Red Hair For The 'It Ends With Us' Film Adaptation
By Olivia Rose Rushing
The Best Beauty Looks Spotted At Paris Couture Week 2023
By Audrey Noble
Get Even More From Bustle — Sign Up For The Newsletter
From hair trends to relationship advice, our daily newsletter has everything you need to sound like a person who’s on TikTok, even if you aren’t.