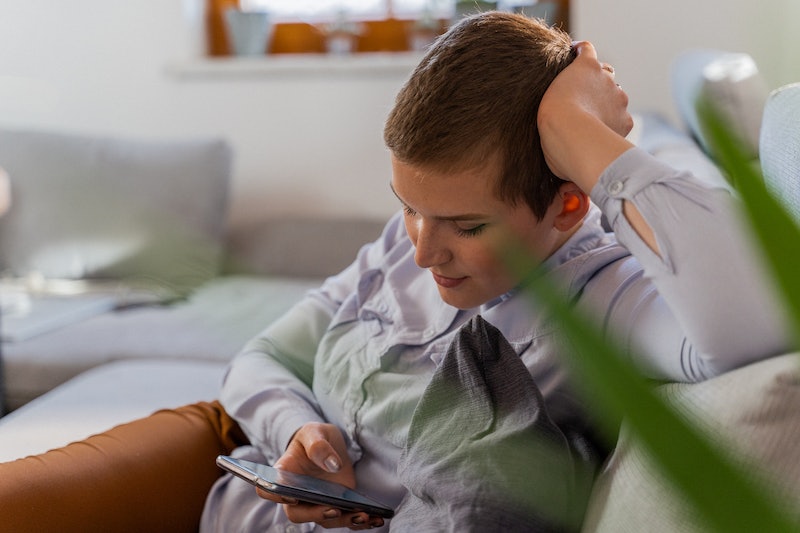 Maybe your mom gave you a warning when you were a kid: "too much TV will make your eyes go square." But these days, as all kinds of screen-based devices — tablets, iPods, laptops, mobile phones — are so enmeshed in our daily lives that they may as well be attached to our bodies, scientists have been focused on figuring out what screen time does to the body and brain. Even if you steer clear of the pearl-clutching headlines, the evidence is clear that you do want to try to get off the computer from time to time.

A lot of the science around the negative effects of screen time focuses on children. But what about adults in dorm rooms and bedrooms, scrolling Instagram or texting until late at night? Too much computer use, just like too much phone use, can indeed cause prolonged physical effects on adults.

"All of us struggle to keep the balance between using technology as a resource and using technology as a crutch," Meaghan Rice, PsyD LPC, a therapist with Talkspace, tells Bustle. Sometimes, she says, it's a good idea to completely unplug from screens. "That boosts our self-worth, increases our momentum, and decreases our stress." Other times, you'll need to spend time on the computer, whether it's for work, or school, or find out who the impostor in Among Us is.

Reducing your screen time just a little — or at least being mindful of how your body is contorted over your laptop — can be good for you. Here are five ways excessive screen time changes your body.

According to different studies, a large amount of screen time as an adult can restructure the matter that makes up your brain. (The brain consists of gray matter, the heavy bit that makes up the folds, and white matter, which transmits messages between neurons.) One study published in Addictive Behaviors in 2020 found that people who had been diagnosed with smartphone addiction — a debated term that generally describes a pattern of problematic smartphone use — had lower amounts of gray matter in various parts of their brain, and lower activity, than others. In general, screen addiction is linked to gray matter shrinkage, problems with white matter's ability to communicate, a lot more cravings, and general poorer cognitive performance. Folks who aren't "addicted" to their smartphones, but do use their devices heavily may experience some version of the same restructuring.

2. You're More Vulnerable To Eye Strain

It's pretty well-recognized by the medical community that too much screen time is bad for your peepers. Blue light from screens isn't just keeping us awake; it may also damage the retina, and eye strain from too much device use is increasing.

"We do not blink as often when we are looking at a screen," Dr. Benjamin Bert M.D., an ophthalmologist with Memorialcare Orange Coast Medical Centers, previously told Bustle. "Without having breaks during the day, these mini “staring contests” with our screens will lead to fatigue and symptoms of dry eye." He recommends taking a break every 10 to 15 minutes to look at a distance target, out a window or across the room, and close the eyes completely for one or two seconds.

3. It Can Affect How You Process Emotions

A study published in 2019 in The British Journal of Developmental Psychology found that the more screen time children had, the less emotional understanding they demonstrated. But it may impact adults, too. Even if you didn't grow up with an iPad within reach, lack of frequent face-to-face interaction, in favor of Facebook and other simulated emotional connections, may actually impact on your ability to process emotion properly. Rice tells Bustle that unplugging may be a good thing for your personal relationships, simply because you spend more time in real life with others.

4. It Can Increase Mortality

A 2012 study published in The British Journal of Sports Medicine indicated that spending significant time parked in front of a screen — whether it's a TV, computer or tablet — lowers cardiovascular health outcomes and increases mortality risk. And if you're trying to offset your days of playing Animal Crossing on the couch with exercise each day, it may not be enough; a 2011 study of 4,500 adults showed that lots of screen time raised your likelihood of death by up to 52%, while being a consistent exerciser only lowered that by about 4%. So it's not just the sedentary lifestyle; it's something about screen viewing itself that causes our bodies to work less well.

5. You May Be At Higher Risk Of Depression

The longer you spend sitting staring at the computer, the more at risk you might be of depression. That's the verdict of a host of studies, including one published in 2019 in BMC Public Health, which surveyed 19 different studies and found a strong link between a lot of screen time (while sitting down) and depressive symptoms. Another, in Preventive Medicine Reports in 2017, found the link was particularly strong in women — but this could be a two-way street. You may be more at risk of depression if you sit on your laptop for hours, but equally, people who are feeling depressed are more inclined to want to scroll through Instagram under the covers.

This article was originally published on Oct. 26, 2015