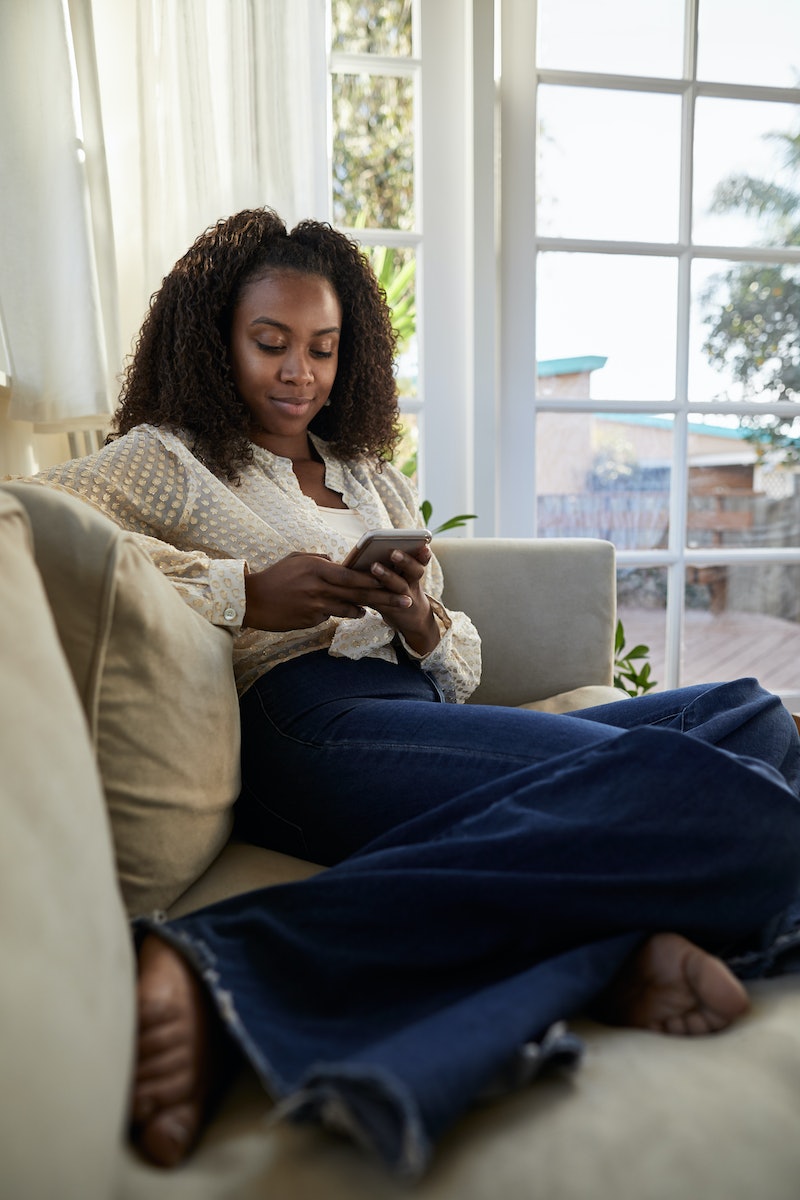 At the beginning of quarantine in March, Lili, 28, set time limits for her social media apps, wary of spending too much time on her phone while in lockdown. They lasted just a few weeks before she removed them. "My Screen Time reports are still going up every week, which is weird because it doesn't even feel like I'm spending more time on my phone,” Lili adds.

Screens were a lifeline in quarantine, connecting (and distracting) those who couldn’t leave their houses. But with states reopening, people are finding that their quarantine screen time habits are hard to break.

"My partner and I recently made a ‘one screen at a time’ rule, vowing not to play with our phones while we watch TV. We broke that rule after a few days — we just don’t have the attention span anymore," Selby, 32, tells Bustle.

According to Hilarie Cash, Ph.D., L.M.H.C., C.S.A.T., founder of digital addiction recovery facility reSTART Life, increased screen time will have lasting effects that will require a lot of unplugged motivation to overcome.

“A little TikTok as a distraction is fine. I see no negative consequence to soothing yourself with an app that you enjoy, so long as you are getting enough sleep, eating well, finding time to socialize, are taking care of yourself, and are able to create digital boundaries,” Cash says. “It’s when your screen time is getting in the way of your health, and you don’t have the control to course correct, that there’s a problem.”

Though digital addiction has been treated clinically since the '90s, Cash says that there isn't one set of agreed upon criteria used to assess problematic screen use. The World Health Organization (WHO) and the Diagnostic and Statistical Manual do not recognize digital addiction as a mental health issue, but studies verify that excessive use of tech devices is linked to anxiety, depression, insomnia, and can affect attention span, concentration, and mood regulation.

Cash's concerns about the increase of screen time during quarantine are two-fold. There’s the element of escapism – since 2020 is a panning out to be the worst horror movie of all time — and then there’s isolation.

“We are social animals, we need social connection,” Cash explains, noting that if you’re spending time online talking to friends or having genuine interactions with other people, that “counts” as socializing. “The thing about the apps that people are spending their time on is that they are carefully designed to be mesmerizing — to keep people engaged with what's on the screen,” Cash says. Apps that you can lurk on, without interacting with others, can have a negative impact on attention span. “Studies show the greatest personality trait associated with success is persistence in the face of frustration, of not being rewarded,” Cash says, explaining that people are reinforcing the opposite traits by mindlessly scrolling. Critical thinking can also be affected: people “don’t know how to consume something of interest while thinking critically about it anymore,” thanks to being served up endless content automatically.

As people get used to socializing IRL again, they might find themselves unable to maintain focus on one conversation, or even one screen. That doesn't necessarily mean that they're stuck scrolling for eternity, but it could mean a lifestyle change is necessary. The difference between an addiction and a habit is control, Cash says. Essentially, the people who are unable to stick to their own boundaries or adjust to life offline will have to face an upward battle with an inability to disconnect, while others will just have to give themselves some time to readjust.

One way to gauge whether your phone use is a problem or you're simply in the habit of using it too much is to unplug for a day. For some people, this won't be possible, due to work and family obligations. But a boundary of any kind — like deleting TikTok for a day — will suffice. “If you can't stick to it, it might be a problem,” she says. “If you can handle it, it’s a good sign." Feeling anxious or uncomfortable is to be expected, but being able to adhere to your own rules is a signal that you've got it under control.

After noticing that my Screen Time report indicated a 255% increase in the last week, I asked Cash if she thinks Millennials and Gen Z-ers are doomed when it comes to phone use. “When I’m thinking pessimistically, I think we are going to have a whole society of digital addicts who don’t know how to interact with each other who are more in awe of their screens than before,” she says. “Alternatively, I think we needed this experience to learn from it. We needed to realize that we don’t like being on a screen, that we crave face-to-face interaction, even if it’s awkward for a while,” she adds.