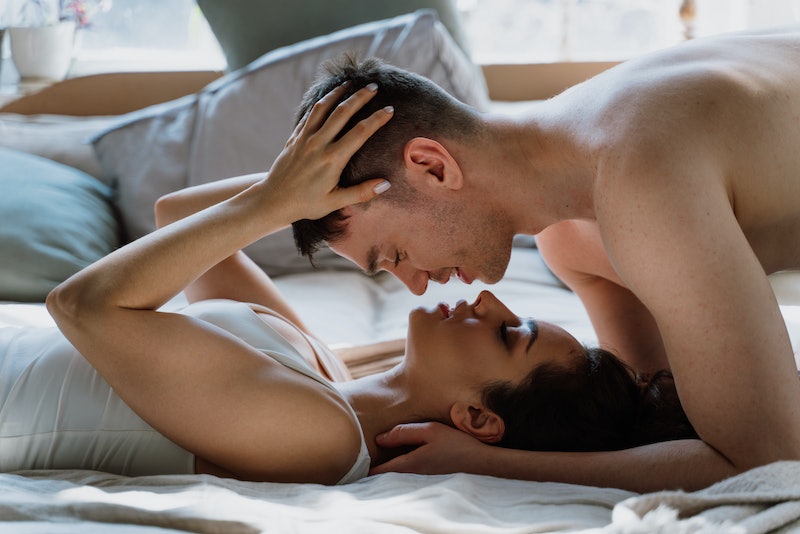 What's the best thing about sex (besides orgasms)? There are so many ways to have it: Upside-down, on the couch, on an airplane, from behind, roughly, gently ... the list goes on. Although traditional notions of masculinity (unfairly) assume that all men are dominant in bed, it turns out that in real life, the sex positions men want are a lot more varied than you might think.

According to SKYN’s 2021 annual Sex & Intimacy Survey, the three favorite sex positions are actually the classics. Among 2,000 U.S. adults ages 18-39, the top sex moves are doggy style (58%), missionary (54%), cowgirl (26%). But of course, everyone is different when it comes to sexual styles, preferences, kinks, fetishes, and turn-ons. And just like how someone's vagina can affect how they achieve an orgasm, factors like penis size — whether it's by-the-books large or smaller than average — can significantly impact what sex positions work best for them. Although penis size is not the most important aspect of sex by a long shot, it can come into play when you're trying to figure out a position that feels good.

In order to figure out what sex positions guys find sexy in the bedroom, I asked seven cisgender, heterosexual men to tell me what position is their absolute favorite. See the sex positions — from classics like modified missionary to positions with a view like butterfly — for yourself and how they compare to the sex positions women want most. (And keep in mind that if your partner doesn’t have a penis, these positions work with strap-ons as well!)

According to Bobby, 26, the missionary sex position is a classic for a reason — even if you think it sounds boring. “I like it because it's comfortable, gets the job done, and is inarguably one of the more intimate positions in the (metaphorical) book. BUT the trick to good missionary is to make slight adjustments. I tend to like it when my girlfriend wraps her legs around my hips as I thrust," he says.

Bradley, 28, likes to get up close to his partners. "I like when the girl is on top and I'm sitting up, so we're face-to-face. It's intimate, and great for grabbing her butt or playing with her boobs," he says.

Daniel, 22, is all about doggy style. "I like when she's bent over and on her knees and I'm behind her. I like that it gives me more leverage and power, and that I can work different angles and depths, and I can also pull her hair," he says.

For John, 22, sex is hotter when he has a good view. "I like this position because [I'm] standing and have a good view of everything going on (lol). Also, the woman's feet on the chest or shoulders is hot," he says.

Steven, 27, says reverse cowgirl is his go-to because it’s different than the standard moves, but also a variation that’s easy to do. “ It's similar to doggy style, but the girl has more control,” he says. “And it's easy from there to get into variations, especially if you're flexible or strong on the bottom."

Brandon, 24, is also all about a sex position with a good view. "For me, this position feels really good because when her legs are crossed, everything feels a lot tighter and there's more friction. Plus, the view of her lying below me with her legs up on my shoulders doesn't hurt either."

For John, 34, this variation of doggy style is his tried-and-true sex move in the bedroom. “I love the feeling of doggy face down,” he says. “It’s intimate, sweaty, and intense. It’s more control for me and deeper penetration for her.”

More like this
I'm 42 & I've Never Had Sex. Is It Too Late?
By Sophia Benoit
The Juiciest “Would You Rather” Questions For Couples
By Alice Broster and Rachel Mantock
How To Respond To A Partner Who’s “Stonewalling” You
By Marilyn La Jeunesse
How To Get Over Someone, According To Experts
By Brittany Leitner
Get Even More From Bustle — Sign Up For The Newsletter

This article was originally published on Oct. 29, 2015