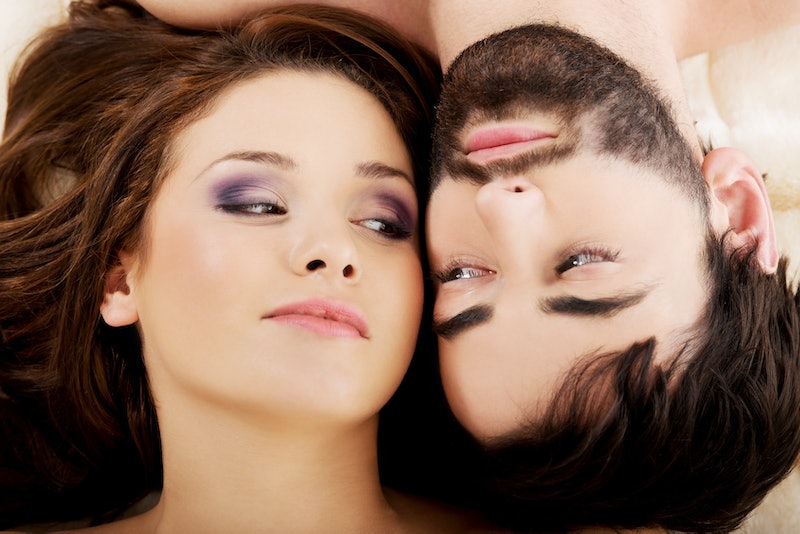 It’s a topic that has yet to go away and probably never will: does penis size matter? Well, does it? Is this something about which you genuinely care? Studies have found that when it comes to penis size, 84 percent of women are just fine with what their partner has. In fact, the people who seem to be the most concerned with penis size are men, as if a smaller penis suggests he’s less manly, and to attain excessive manliness one must have a gigantic dick ― something most women don’t even want.

Don’t get me wrong. A big penis size does matter to some women, but there are less of those women out there than there are women who think your penis, yes, your slightly below average, mildly crooked penis is just fine. For us, it’s more about how you use it and where you can excel in other areas, because intercourse is just one part of sex; sex encompasses so much more.

To see how real life women feel about penis size, Bustle asked some to share their thoughts on the size debate. Completely honest, with even a few names changed to keep anonymity intact, here’s what 25 women had to say about penis size.

"I'd like to say it doesn't, but it does to an extent. However it's less length and more girth?"

"I never thought size mattered until I was with someone with a HUGE penis and having sex became unbearable. Since then I've felt that size really makes a difference."

"Yes, it matters, but only if it's too big. That shit hurts! Plus, guys with big dicks tend to rest on that and not actually put much effort in to pleasing their partner because it's like, 'I have a big dick, what else do you want?'"

"For me, it definitely matters. I've found that I much prefer larger guys, but that's a lot to do with how my own body is shaped. Not to say that smaller guys can't be good lovers ― they absolutely can ― but I'm more satisfied with big guys. However, too big is an issue too. Then it just hurts."

"No, because good sex is much more a result of healthy emotional connection than body part size."

"Penis size doesn't really matter that much to me, since penetrative sex feels good, but isn't the end all be all. In all honesty, larger guys usually hurt a lot more. I'd say it's more about the size of a man's tongue, if you know what I'm sayin'. (Oral sex is KEY.)"

"Matters. Not too small or not too big ― kind of like a perfect scoop of Hagen Daz ice cream.Too small-still hungry, too big-tummy ache."

"I have not run across too small, but have run across too big, so either I’m lucky, or guys are way too f*cking concerned about it. And considering my sampling size, I’d guess it’s the latter."

"It doesn’t matter. I’ve found that men with even the smallest dicks know how to work them in a way that size doesn’t come into play."

"As long as you can fill it and I mean decently feel it, then it doesn't matter that much. There's nothing sadder than having to ask if it's in when it IS in ― it's just super uncomfortable and embarrassing for both."

"It depends on what the person is looking for. Looking for fun? GO BIG! Looking for love then COMPROMISE!"

"It definitely does, but not always in the ways one might expect. Some of us smaller ladies, for instance, are kind of terrified of monster cock. Everyone is built differently and has their own preferences. Some people are just not physically compatible, but you won't know for sure until you try, right? Long story short: it matters somewhat, but how said person is in bed (and how willing they are to be flexible and do what needs to be done for their partner) is WAY more important."

"Kinda. There's a size that really is too small and being small myself there are definitely sizes that are too big. But really all I ask is for something larger than a baby carrot and its owner to be flexible, hard working and have a sense of humor about whatever else might need to be done for us to get along well together."

"I had a boyfriend who was very well endowed and I never had an orgasm from intercourse with him in five years time. I was kinda shocked because the world would have one believe that a huge one is the only satisfying way, but it just didn't work. It was more uncomfortable than anything. I don't like small, either, but slightly larger than average (average being 5-6in in my book) is the most pleasurable."

That said, biggest doesn't always mean best. There is DEFINITELY such thing as too big of a penis, and penis size is SO far from the most important determining factor when it comes to good sex."

"That's difficult, because 'size' doesn't necessarily translate to inches; girth counts as well. If someone is five inches and skinny, that feels a lot different than five inches and thick. For me, size doesn't *really* matter, although I won't lie and say I don't prefer a bigger guy. The best sex I've had was with an average-sized guy, but his proclivity for oral and other means of making me orgasm far surpassed his penis size. I don't really get off from penetration alone, so size isn't super imperative to me, but I do like when a guy is slightly above average (and doesn't have a super skinny penis)."

"It would be a lie to say size didn't matter for me. When I'm dating a guy, and my mind wanders to how much he's packing (because, yes, my mind does go there and usually rather early in the game). I'm generally hoping to see something around 7" or up when I have sex with a guy, but in my experience the size doesn't correlate to the quality of the sex. Instead, that is determined more by hardness (is there a better descriptor for that?), da moves, and the generosity, and the time spent. Yet, I still hope for a large dick. I am unreasonable like that."

"Tiny penises are for children. Not promoting adult on child action just child penises on children."

"Not in like a size queen way, but it just feels nice when you can feel the dick up in yo business and whatnot."

"Size does matter, but only in the extreme cases. If you're slightly smaller than average but good at sex it's probably no big deal, and if you're slightly bigger than average that's great but not life changing. I dated a guy for a long time with a really small penis and the sex just was not as good, although I convinced myself it was because I liked him a lot. Also, I hooked up with a guy who was 6'7'' for a while and his penis was so big that a lot of positions would get painful, which meant we constantly were losing momentum and having to stop and adjust, which is sort of a mood killer. But those are the only two guys it's ever mattered with. Everyone anywhere in the middle was fine."

"Yes. People can talk about there only being sensation in the first three inches of the vagina, but that's bullshit. That said, plenty of dudes with big dicks don't bother to really put any effort into sex because they think size alone matters. You gotta find that rare gem: the slightly insecure hung dude."

"Girth is important. Length, less so. I've personally never come across one that was too short or too long, but I have met one that was too skinny, and this was when I was 20, so it's obviously not an issue of me being 'old,' 'loose,' or 'stretched out,' as some butthurt dudes might assume. I did hear about a friend of a friend who had to break it off with a guy she really cared about because he was too big, but I assume he was a unicorn."

"It's a yes and no situation. I have had the one night stand where the guy and my pinky were the same size; not much to do there, even with creativity. I have also heard of friends who felt their goddamn ovaries were sore after because a very hung guy had been a bit too enthusiastic.

The normal 5 to 7 inches is... fine? If you love spooning and have a bit of a butt, obviously some length will make it easier. I find I have a different favorite position depending on the guy exactly for the length reason. What's important though: good girth and being actually hard..."

"It makes a difference but that doesn't mean the sex is always better or that it's an absolute must. But if we're drafting up a sex wish list here, then yes, please."